Uggah, who is representing Gabungan Parti Sarawak (GPS), will be challenged by Mikail Mathew Abdullah (PKR) and Andria Dundang @ Andria Gelayan from PSB.

Bukit Saban returning officer Charlie Keling made the announcement after the nomination form submission process was completed at the candidate nomination centre at the Spaoh sub-district office here.

Earlier, Uggah, accompanied by Betong Member of Parliament Datuk Robert Lawson Chuat, arrived at the nomination centre at 8.20 am.

Mikail was the first candidate to arrive at 7.50 am while Andria showed up 20 minutes later.

In the 2016 state election, Uggah, who contested on a Barisan Nasional (BN)-PBB ticket, won the Bukit Saban seat after obtaining a majority of 4,599 votes, defeating PKR candidate Noel Changgai who garnered 925 votes.

The nomination process took place without the presence of party supporters, in compliance with the standard operating procedures of COVID-19 infection prevention, and individuals wishing to enter the centre were required to undergo RTK testing. - Bernama 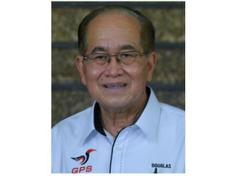