KUCHING: Nominations have been closed at 10am and it’s a confirmed four-cornered fight in Padungan.

Returning officer Theresa Korina Peter said all candidates were checked and none were rejected.

First to submit their candidacy was Parti Bumi Kenyalang candidate Raymond Thong Ee Yu at 9am.

Second to file their candidacy was Gabungan Parti Sarawak (GPS) Datuk Wee Hong Seng at 9.03am, who is also former Kuching South mayor.

Speaking to reporters later, Chong said all 26 DAP candidates have been accepted.

“None were rejected,” added Chong.

The Padungan seat was last held by Wong King Wei, who resigned from DAP July last year, citing disillusionment with the party’s direction and management.

Wong will not defend his Padungan seat. 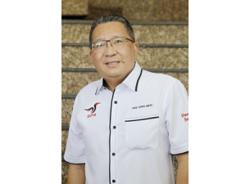