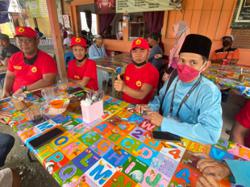 The 36-year-old local businessman said the prospect of becoming a giant-killer if he defies the odds to defeat Sarawak's sixth chief minister in an election is compelling.

"If I can become a giant killer, that would be historical. We are all human beings. We do not fear man, we must only fear God," he said.

"He is also not the chief minister unless he is elected again. So we are both on the same level," added Mohamad Sofian, one of the four contestants at the Gedong state seat.

Mohamad Sofian also said that he needs to defend Gedong from falling into the hands of an "outsider".

"I am a Gedong local and have lived here all my life. I have seen too many unsolved problems here," said Mohamad Sofian, who lives in Kampung Kanchong.

He added that PSB is capable of replacing GPS as the Sarawak government.

"A lot of the party members are also formerly from GPS. They have the experience of being in government and are capable," said Mohamad Sofian.

"We are a multi racial party who can represent and unite all Sarawakians," he added.

The Gedong seat was created in 2016 from the Simunjan constituency, and won by Datuk Naroden Majais in the 11th state election with a majority of 3,365.

In this election, Naroden paved the way for Abang Johari, who moved from Satok where he served as assemblyman since 1981. Do you know ... about a special celebration on the ninth day of Chinese New Year?
INTERACTIVE: How Malaysia needs to prepare for the Omicron surge
MCA sec-gen hopes for teamwork that will benefit all
PKR to drop Pakatan logo for state election
Tok Mat: BN parties must band together
Family mourns loss of pet cats to python
Cave temple members, guards to get safety training
Illuminati conspiracy theory riles up artiste
Ex-1MDB CFO says he believed the fugitive businessman represented Najib
Federal funds needed for proposed Kudat port