To say the least, the year 2019 was a tumultuous one. Ups and downs, tears of joy and sorrow dominated the headlines.

Here are some of the major stories that dominated K-pop news.

At the beginning of the year, it seemed like K-pop powerhouse YG Entertainment would have a solid 2019. YG’s girl group Blackpink was enjoying growing popularity around the world, while the label’s crown jewel Big Bang was gearing up for a possible comeback when all the members were discharged from the military.

But that all changed when the label became mired in an industry-wide scandal that started at the Burning Sun Nightclub, owned by Big Bang’s ex-member Seungri. The Burning Sun scandal then snowballed to allegations ranging from prostitution, sexual assault, police corruption, spycam, and drug, among others, involving multiple K-pop artistes.

The scandal forced Seungri to quit the entertainment industry, while YG’s head and founder Yang Hyun-suk also stepped down for his involvement, including allegedly colluding with police to cover up past drug incidents involving one of his artistes, iKON’s B.I. His brother Yang Min-suk, who served as agency’s CEO, also stepped down in June.

YG is now led by new appointed CEO Hwang Bo-kyung, but industry watchers speculate it will take a while for one of the once powerful K-pop agencies to regain its foothold. The scandal has halved YG’s stock price from earlier this year, and the future looks bleak at the moment. But there is some hope. Blackpink is slated to return with new music early next year, while Big Bang could possibly still make comeback. 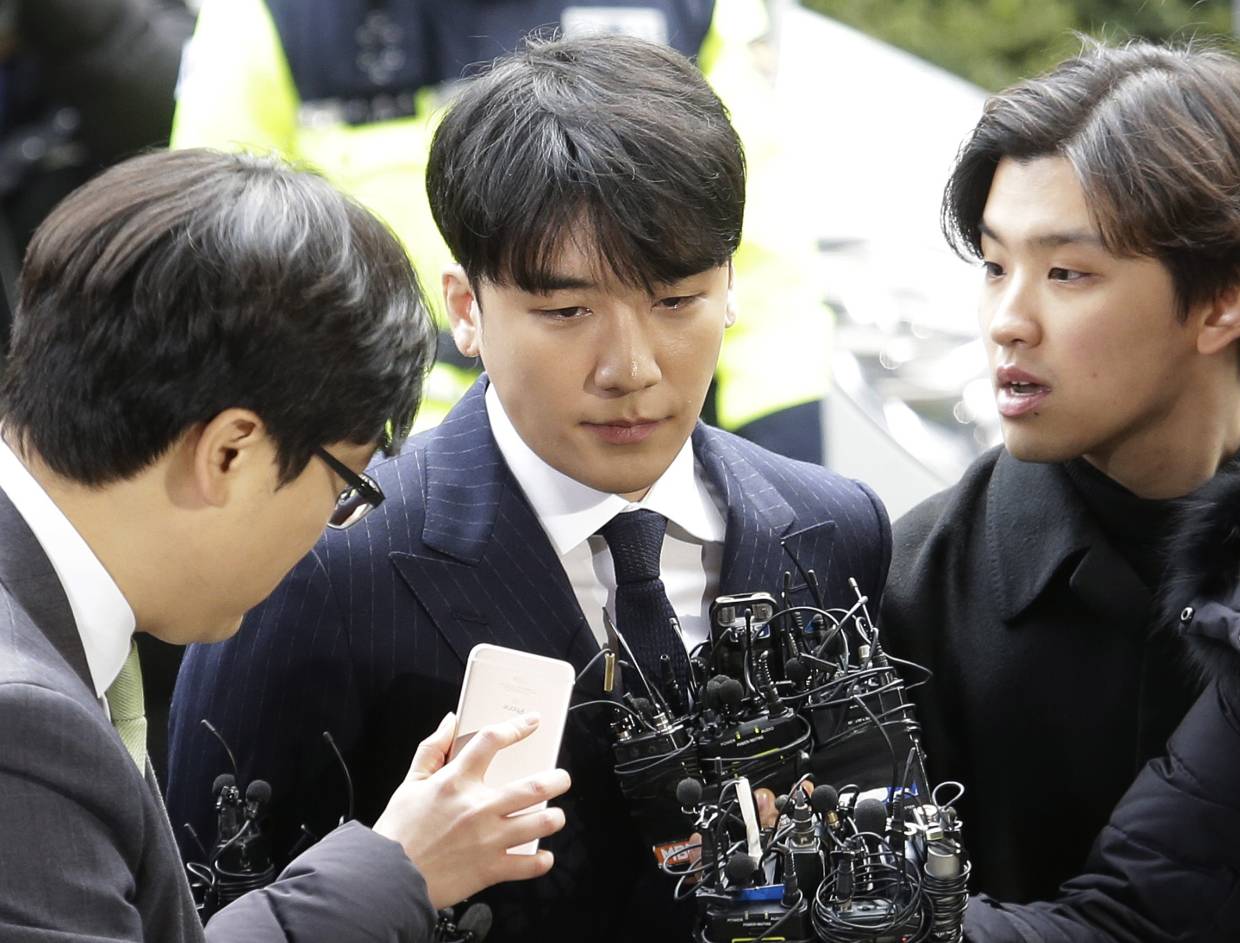 As the year kicked off, BTS continued its global domination, reaching places that no other K-pop group has. In February, the seven members, dressed in sleek black tuxedos, walked the red carpet of the 61st Grammy Awards in Los Angeles. At music’s big night, BTS graced the stage to present the best R&B album of the year to H.E.R. While BTS did not take home any trophies – after being nominated for best album package – it made history as the first-ever Korean act to appear at the Grammys.

In April, BTS made its much-awaited return to music with Map Of The Soul: Persona, slashing global charts and its own records. The seven-track EP debuted at No. 1 on the Billboard 200, becoming the first group since the Beatles to earn three top spots in less than a year. The album also ranked No. 1 on the UK’s Official Albums Chart, becoming the first Korean act to do so. The title track Boy With Luv, featuring Halsey, debuted at No. 8 on the Billboard Hot 100, becoming the band’s highest-charting song, as well the best score by a K-pop group.

Meanwhile, the band travelled all around the world, hitting major stadiums in its world tour Love Yourself: Speak Yourself. London’s Wembley Stadium, California’s Rose Bowl Stadium are among the stops that BTS turned the colossal stadium into purple. With its stop at the King Fahd International Stadium, BTS also became the first-ever foreign act to perform at a stadium in Saudi Arabia.

On the awards front, BTS won two prizes at the Billboard Music Awards and three at the American Music Awards. It’s not over yet. With the year-end music awards, BTS has been sweeping the scene, taking home multiple top prizes at the latest MMA and MAMA shows. 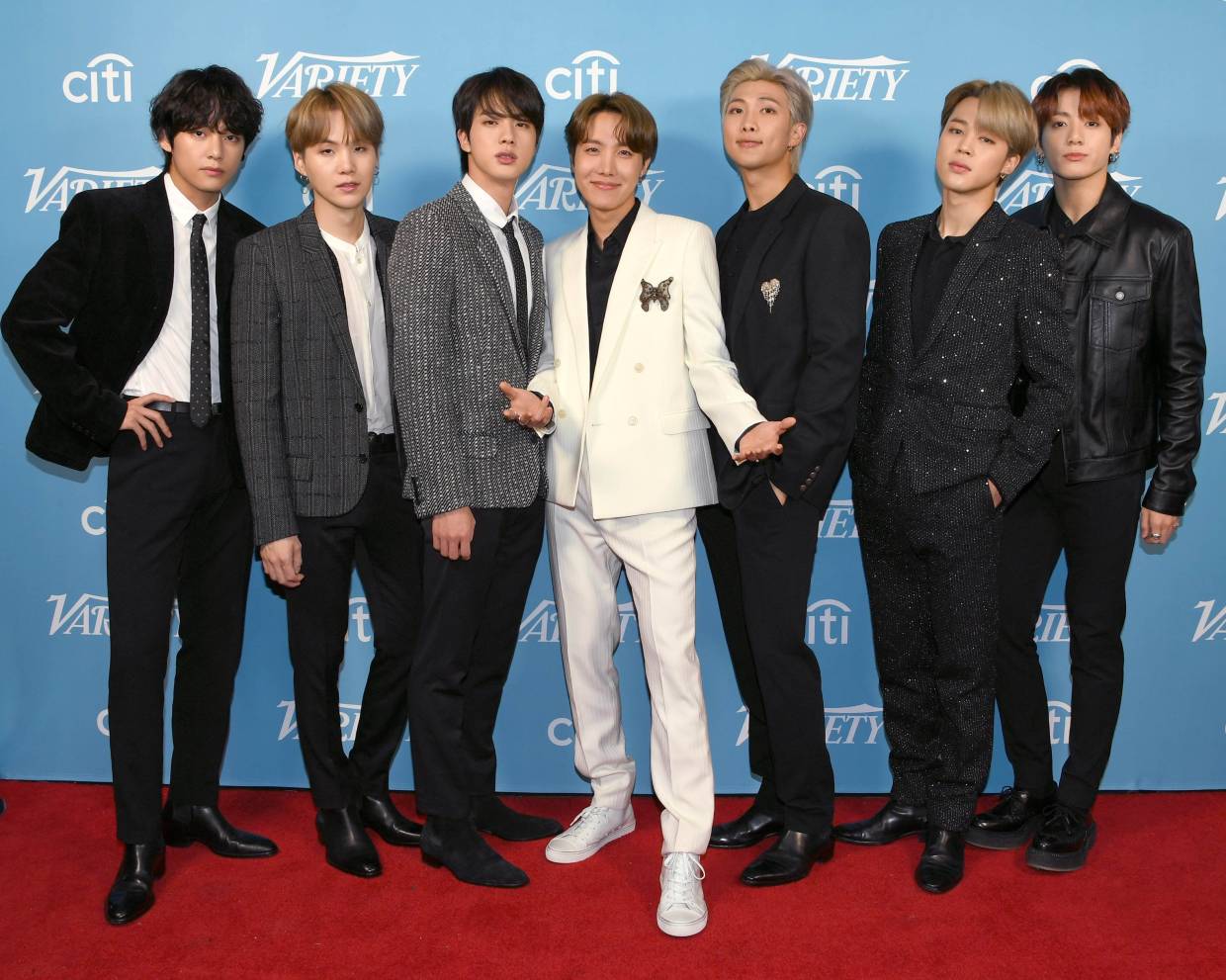 BTS at the 2019 Variety's Hitmakers Brunch in the US. Photo: AFP

K-pop stars sing about love, but romance is not so easy in the industry where singers are closely watched and bound by strict rules -- where some agencies even put a no dating clause in the contract.

Nevertheless, new lovers are born, as well as some heartbreaks in this cutthroat K-pop industry. Some manage to stay strong and steady.

To kick of the New Year, K-pop fans woke up to a news that K-pop darlings EXO’s Kai and Blackpink’s Jennie were dating, which was later confirmed by the agency. The news met with feverish media attention as well as mixed responses from fans.

The fire, however, was short-lived. Less than a month after their relationship was exposed, EXO’s SM Entertainment said the two had split ways, without giving a reason.

A new idol couple emerged when Kang Daniel, former Wanna One member, and Twice’s Jihyo were confirmed to be dating in August. The news shocked their fans with some expressing disappointment, but support as well. The two reportedly were introduced through an unnamed K-pop idol. Despite some breakup rumours, they still seem to be going steady.

Then there is K-pop power couple HyunA and Dawn, who have been going strong for four years. Earlier this year, both singers signed with Psy’s new agency P Nation, after being kicked out from Cube Entertainment for dating last year. Their relationship carried through to their work, as the two made the rare decision to release albums on the same day. In November, HyunA dropped Flower Shower, while Dawn released Money at a joint showcase, openly expressing gratitude and affection toward each other. 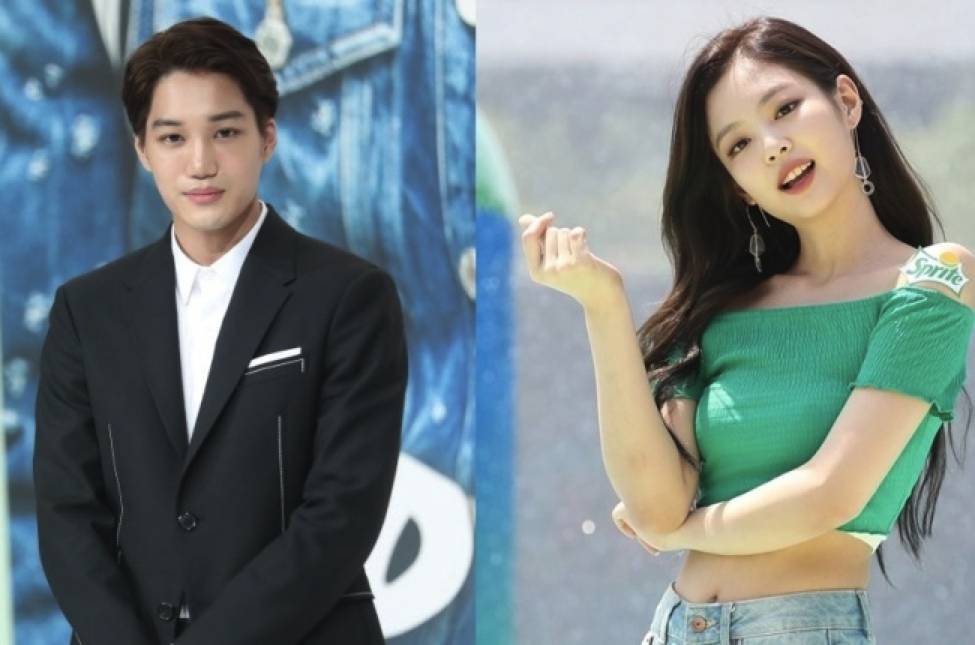 EXO's Kai and BlacPink's Jennie were reportedly dating earlier this year, but that romance proved short-lived.

It was a heartbreaking year, having to bid farewell to two K-pop sweethearts. In October, Sulli, formerly of f(x), was found dead at her home. While the exact cause of death has not been revealed, the 25-year-old starlet, whose real name is Choi Jin-ri, had been suffering from depression, according to the police. Sulli had been target of severe public criticism for her outspoken positions on feminism, mental health and body image, which remain sensitive issues in the K-pop industry.

Six weeks later, Goo Hara, an actor and singer who was part of Kara also died. The death of Goo, who was a close friend of Sulli, prompted another wave of grief and shock. Goo had been also suffering from online abuse and intense media attention, especially after her involvement in the court battle with her ex-boyfriend, accusing him of threatening her with a sex video filmed without her consent.

The tragic deaths of the two stars drew attention to wide-ranging issues, including mental health, the intense pressures K-pop stars face, and cyberbullying. 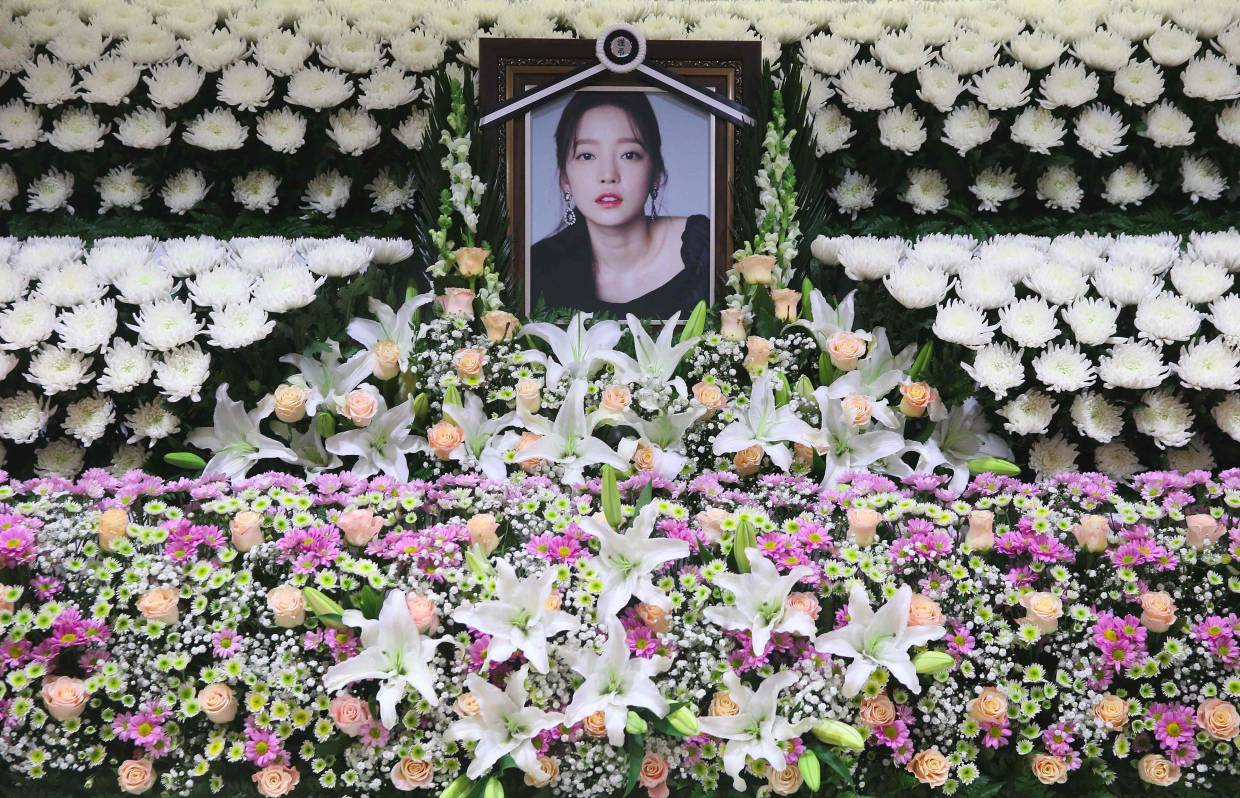 Portrait of late K-pop star Goo Hara, surrounded by flowers at a memorial altar at a hospital in Seoul. Photo: AFP

In October, the latest supergroup was born from K-pop powerhouse SM Entertainment, partnering with Capitol Music Group for distribution. Dubbed the “Avengers of K-pop, ” SuperM consists of the top talents from the agency’s major groups, including SHINee’s Taemin, EXO’s Baekhyun and Kai, NCT 127’s Taeyong and Mark and WayV’s Ten and Lucas.

The mega project debuted at the top of the Billboard 200 albums chart with its self-titled EP SuperM, led by title track Jopping. With the album launch, the group, on the back of strong fans, is eying to break into the US market, with its English songs and North America tour through February.

With no time to rest, EXO made a much-awaited return with its sixth full-length album Obsession, in November. The album brings six of the nine members, Kai, Chanyeol, Sehun, Baekhyun, Suho and Chen. D.O. and Xiumin are absent due to mandatory military service, while Lay is busy with solo activities in China.

Despite the absence, EXO put on electrifying performances for the album’s title track, introducing a new concept called X-EXO – the band’s evil clone. EXO has been releasing songs with two contradicting concepts, under the storyline of EXO members fighting against their darker, evil doppelgangers X-EXO. 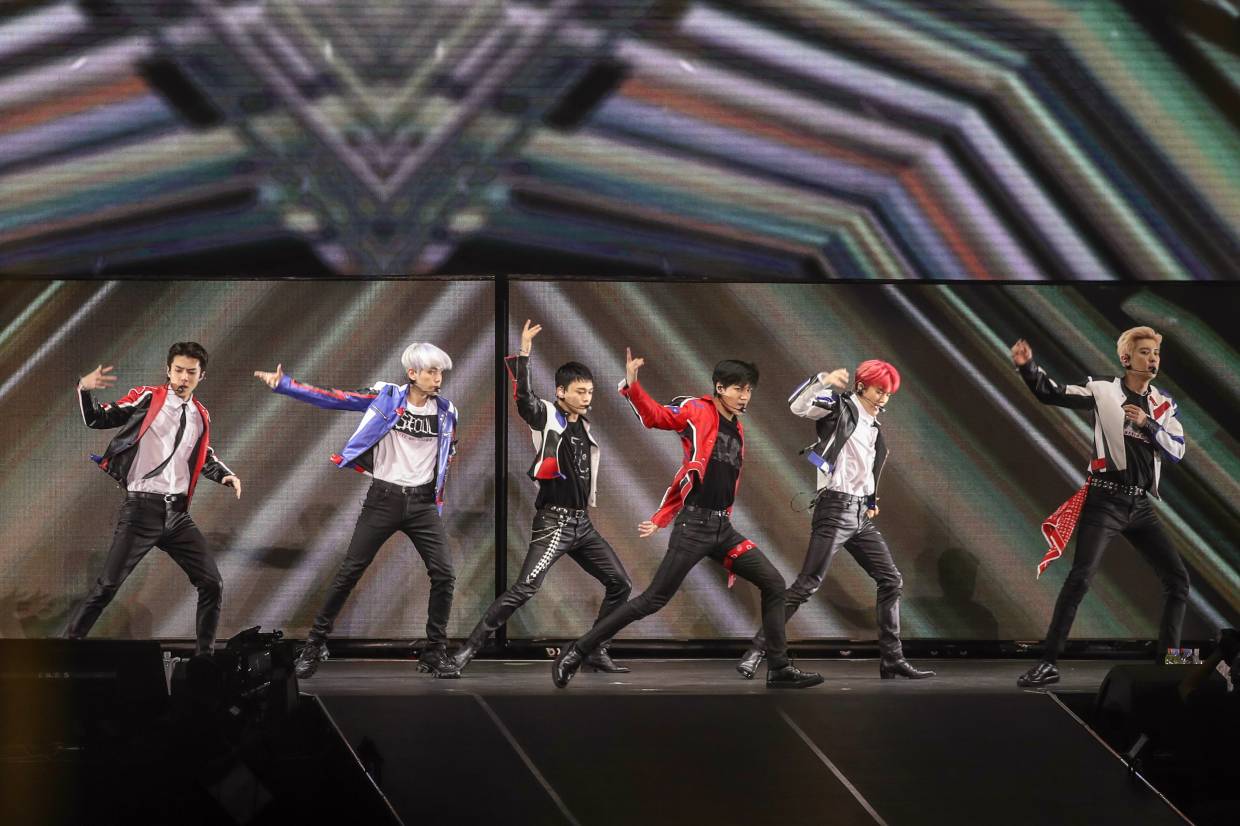 Mandatory military service in Korea has always been a hotly debated issue. Especially for male K-pop stars, because enlistments mean about two years away from the entertainment industry.

While fans were hoping popular K-pop stars could possibly be exempt from service – as some top artistes and sportsmen are – the government clarified in November that the exemption will not be granted, citing a shortage of conscripts every year.

This year, we saw EXO’s Xiumin and D.O taking leave for military service in May and July, respectively. In April, SHINee members Key and Minho were enlisted in March and April, following Onew last December. Following Yoon Doo-joon’s enlistment last August, all other Highlight members joined the service this year. 2PM’s Junho and Chansung also were enlisted in May and June, respectively.

After a long-wait, all Big Bang members were discharged from the military, starting with T.O.P in July, G-Dragon in October and Daesung and Taeyang in November. With all members discharged fans are anticipating a big comeback from the band, but nothing has been decided yet. – The Korea Herald/Asia News Network