StarLifestyle's TV reviewers look back at our favourite shows of 2019, and the ones we gave up on.

Yesterday, we found out what our readers' favourite TV shows of 2019 were. Today, StarLifestyle's TV reviewers look back at our favourite shows of 2019, and the ones we finally changed the channel (or stopped streaming) on.

This eight-episode series from Netflix starts off with a teen accused of lying about her rape, and then shifts to two female detectives investigating similar rape cases and doing their darndest to catch the rapist.

The series is difficult to watch, but at the same time worth watching from beginning to end. Based on a 2015 news article An Unbelievable Story Of Rape, viewers are given an account of the events at two places with two different timelines.

While the performances from the actors (Merritt Wever, Toni Collette and Kaitlyn Dever) are amazing, what stays with you long after you’re done with the series is a feeling of hope... that every woman who’s violated will get some form of peace at some point. – Mumtaj Begum Like the name suggests, this is one of the most beautiful things to premiere on Netflix in 2019.

Set in the 1950s in Rio De Janeiro, this Portuguese series revolves around a woman who rebuilds her life after her husband disappears. It has flair, love, exotic locations, good looking people and most importantly, drama.

The first season has seven episodes, and they discuss topics ahead of its time – female empowerment, gender equality. Most Beautiful Thing has been renewed for a second season. – Sharmila Nair This five-part series is based on the real-life 1986 Chernobyl disaster – where a massive explosion at the Chernobyl Nuclear Plant in Pripyat, Ukraine, led to the spread of radio-active material to as far as Belarus and Russia.

If you haven’t seen Chernobyl, drop everything you’re doing now and watch it (streaming on HBO Go). Here’s why: Besides the impressive acting and realistic makeup, set and production design, Chernobyl wowed me simply because it took a technical subject matter with a lot of moving parts and explained it with such clarity and in a way lay people can understand. – Kenneth Chaw

The Boys, on Amazon Prime, isn’t like any superhero movie or TV drama I’ve ever seen. It completely blew me away.

In this show, we are introduced to The Seven, a band of celebrity superheroes (Supes, they’re called) who are endorsed by a shady corporation that monetises them for all they’re worth. The Supes may help people in trouble but they seem more focused on helping themselves – building their brand, raking in the moolah, etc.

Here’s where The Boys come in. It’s made up of ordinary folk who’ve all had some run-ins with the Supes, and are out to expose the heroes for the crooks that they are.

Led by Bill Butler (the amazing Karl Urban), these fellas may not possess superpowers but they have heart, charm, humour and common sense. And, boy, do they kick a$$. Lots of well-told drama, tonnes of action and jaw-dropping reveals. – S. Indramalar I have never watched a telenovela... except the American version of Ugly Betty, which is a remake of the Colombian series Yo Soy Betty, La Fea.

While the Spanish series High Seas is not exactly a telenovela, its eight episodes have all the ingredients – over-the-top acting, ridiculous plots and beautiful stars. I recommended it to all my friends with this summary: “It’s a cross between Downton Abbey and Murder On The Orient Express, but on a luxury cruise liner.”

Armed with inquisitive minds and fabulous outfits, rich sisters Eva and Carolina investigate several murders that happen on board the cruise ship they are on. I love a good murder mystery with plot twists and High Seas has them in spades. Throw in haute couture from the 1940s, and this suspenseful series from Netflix became a surprise hit that got me hooked. – Gordon Kho The Dark Crystal: Age Of Resistance

It's been a wonderful TV year for pop culture and sci-fi geeks, with shows like Watchmen (what a watch, man), The Mandalorian (Baby Yoda!), The Boys (Oh boy oh boy), Titans (Bat-who?), His Dark Materials (Armoured bears!), The Witcher (Hmmm...) and The Umbrella Academy (one for a rainy day) all worthy of mention here. But the one show this year I actually managed to binge from start to finish was one that was entirely made with puppets.

It may seem like a rather left field choice, but for someone for watched the original The Dark Crystal back in the 1980s, this prequel was not only a nostalgic return to that world, it was also a great expansion of a fantasy universe that had once capture my imagination as a kid. And considering how the original was like, watching what happened to the Gelflings unfolding before your eyes is gut-wrenching.

Oh, and don't turn your nose up at this just because it's made with puppets – some of those puppets were a whole lot more expressive than Kit Harington was in Game Of Thrones. – Michael Cheang The Dark Crystal: Age Of Resistance

What we stopped watching

When Arrow and The Flash first began the Arrowverse, they offered a breath of fresh air. But as more and more series were spun-off from these two shows, you realised that the stories are regurgitated with every new season.

While it is normal in comic books for a dead character to resurface as another character, from another universe – and yes, it’s even normal to fast forward the years – it is just grating when all that happens here. Worst of all is when the hero never seems to learn his or her lesson, and keeps making the same mistake. So goodbye Arrow, The Flash, Legends Of Tomorrow and Supergirl. – Mumtaj Begum Let it be known that I tried, very, very hard, to continue watching Riverdale after Season Three. Guess what? I rather stick a fork in my eye than to put myself through another episode again. Ever.

Don’t get me started on the painfully absurd storyline, in which the high schoolers do everything but homework, and act, dress, speak way more matured than their portrayed age. Not to forget the annoyingly hapless parents who let their children run the show... *sis cannot*. – Sharmila Nair Unbreakable Kimmy SchmidtThe second half of Season Four, its final season, was released in January and unfortunately, I couldn’t finish it. It’s a pity because when Unbreakable Kimmy Schmidt – which centres on Kimmy who gets rescued after being trapped in a cult for 15 years – premiered back in 2015, it was fun to see the character discover the world for the first time.

Brimming with positivity, Kimmy and her observations on life and love were always so refreshing. However, after a while, Kimmy’s adventures feel limited and her dealings always seem to revolve around the same characters, although, I must say, they are quite lovable.

But there’s a lot more people and experiences for her to encounter, and Season Four just feels a little confined. – Kenneth Chaw

I stopped watching The Voice this year. I’d been following the reality competition since it started, but I just couldn’t bring myself to watch even the blind audition segment of Season 16. I think I finally grew tired of the repetitiveness of the series.

More to the point, I grew tired of diva judge Adam Levine who seemed to be constantly competing for the spotlight with the contestants. So, even though he left the series in Season 17, I got tired of this series, just like how I did with American Idol many years before. – S. Indramalar Some things should just be left the way they were. Big Little Lies, based on the novel by Liane Moriarty, was supposed to be a limited series when it was released in 2017. But because of the tour de force performances from stars such as Reese Witherspoon, Nicole Kidman, Laura Dern and Alexander Skarsgard and off-the-chart ratings (not to mention scooping several TV awards along the way), a second season was ordered.

However, with no murder and a lack of mystery to propel the series, Big Little Lies Season Two was underwhelming as it was unnecessary. Not even the mighty Meryl Streep could save the show... and that’s no lie. – Gordon Kho Sorry, Matt Groening. I tried. I really tried. The otherwise lacklustre first season ended in such a way that I decided give the second season a shot, but gave up after three episodes of weak and largely laugh-less fantasy 'parodies'. The characters somehow got even more annoying, and as if one hugely irritating elf was not enough they 'imported' an entire village of them into Dreamland this season.

Disenchantment has been renewed for a third season, so it might have gotten better as the season progressed. Unfortunately, I never stuck around long enough to find out.

Oh, and like Mumtaj, I'd given up on the Arrowverse a long time ago, but decided to at least give it a shot with the Crisis On Infinite Earths crossover episodes. We're now halfway through that 'event', and I was reminded why I'd stopped watching the Arrowverse in the first place. – Michael Cheang 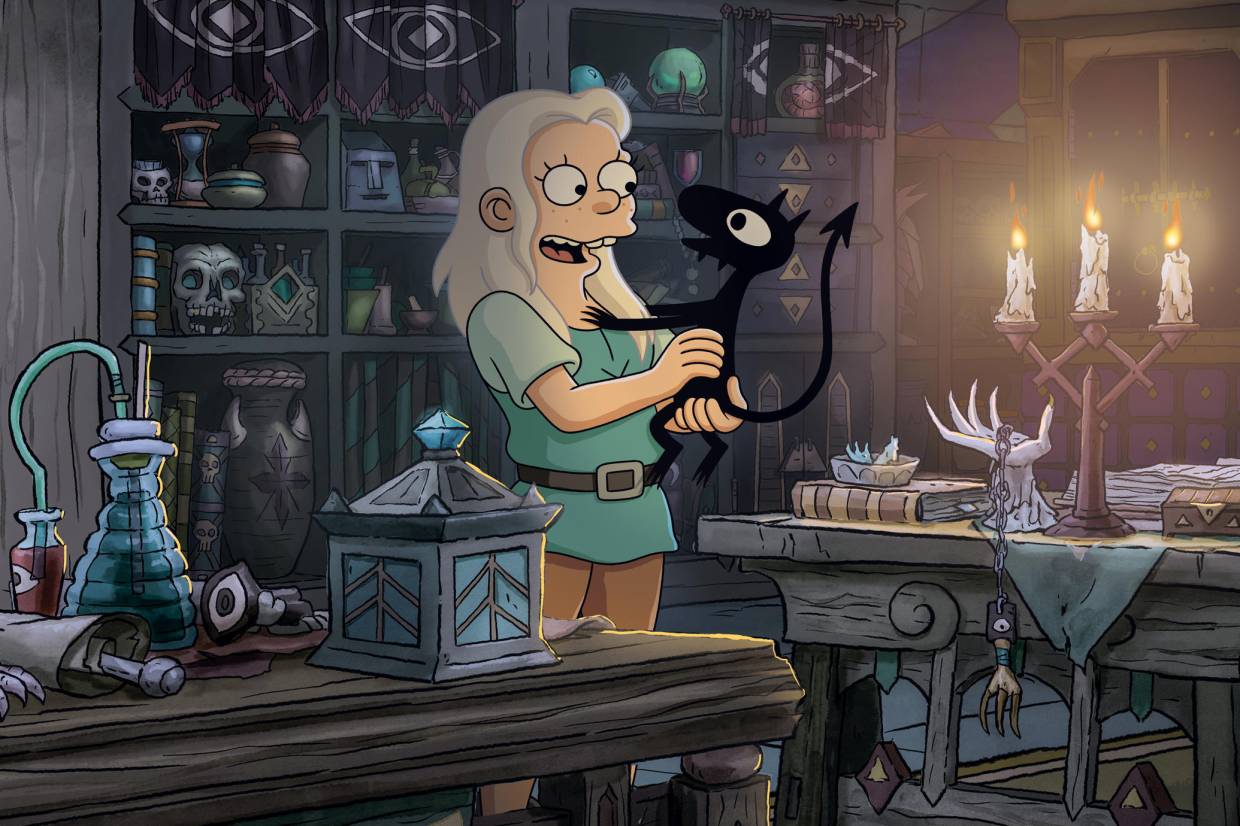