THE Thai authorities have apprehended wanted Malaysian fugitive Tedy Teow Wooi Huat after police there cracked down on gambling syndicates in Southern Thailand.

Thai police announced they had detained Teow on July 22 for alleged money laundering.

His capture came after a number of local politicians in Songkhla and Nakhon Si Thammarat provinces were arrested for alleged involvement in gambling syndicates and Thai police managed to link them to Teow.

They captured him as he was trying to flee Thailand on an unregistered fishing boat.

According to Thai police, Teow is believed to be the major financier for online gambling rings in the kingdom.

However, Teow is also a wanted man in both China and Malaysia and both countries have sought to extradite the billionaire to face trial in their respective courts.

Teow has hit the headlines numerous times with his involvements in various scams since 2008.

He was the key figure in the Island Red Cafe franchise fiasco from 2008 to 2010 that turned out to be an investment scam.

He and his son were sentenced to a day in jail each and a fine that totalled RM160,000 for their involvement in the scheme that fleeced investors of over RM1mil.

By 2018 Teow was in hot water again and fined RM3mil for his company's (MBI International Sdn Bhd) involvement in M Mall 020 digital coin that Bank Negara flagged as a pyramid scheme.

As a result of that scam, hundreds of Chinese nationals protested outside the Chinese Embassy in Kuala Lumpur asking help from the Chinese to recover the millions they had poured into investing in MBI International.

Disgruntled investors even accosted one of Teow's sons in his home with a knife and dropped off two fake bombs in the house after they fled.

The final straw for Malaysian authorities came in 2021 was when police busted a huge Macau syndicate and linked it to Teow and his two sons as their main suspects.

According to the police, the syndicate would get victims to transfer money to a mule account which they would then syphon off into other accounts.

They added that a total of RM336mil had been stolen to be invested in Bitcoin and properties.

Prior to this discovery, police said that Teow had already fled to Danok in Thailand by January 2020. 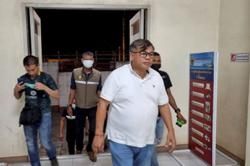