KUALA LUMPUR: Nine people have so far been detained over a Hari Raya-themed online gambling advertisement just as another similar video made an appearance on social media.

Police are now looking for the man behind the production of both videos.

“Two men, the video director and videographer, have been remanded until April 21 while six others, the actors, will be released on police bail after having their statements recorded, ” he told reporters at the Dang Wangi police headquarters yesterday.

Police are looking for a 35-year-old man believed to be the organiser of both videos.

“We believe that he was responsible in arranging for the production of both videos, ” he said, adding that initial investigations revealed that each actor in the first video was paid about RM180.

“We believe that the actors of both videos know each other, ” he said.

Police are in the midst of identifying those behind the production of the second video, including the producer and director.

“We will not compromise in taking action against those involved, ” he said, advising the public not to share the videos as these could cause public unrest and disharmony among the people.

“We urge those with information on both videos to contact the police as soon as possible, ” said ACP Mohamad Zainal.

It was earlier reported that Bukit Aman was investigating the first Hari Raya-themed online gaming video, which went viral on Thursday, after 38 police reports were lodged.

Investigations into the video, which was shot in Ampang and Hulu Langat on March 13, were made under Section 504 of the Penal Code and Section 4(1)(g) of the Open Gaming Houses Act as well as Section 233 of the Communication and Multimedia Act 1998. 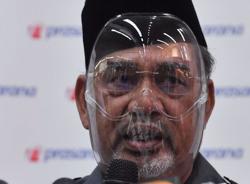