THERE has been an increase in demand for an imported breed of cattle known as ‘lembu sado’ this Hari Raya Haji despite the higher price of its meat, Utusan Malaysia reported.

Mohd Shahrir Mustapha@Harun, deputy chairman of a breeders’ association in Terengganu, said ‘lembu sado’ could cost up to RM25,000 each, depending on its weight.

The meat was of high quality, which explained the good demand for it, he said.

But the price per kilogramme could end up in it being cheaper than other cows, he said.

Citing the example of a 370kg ‘lembu sado’, Mohd Shahrir said a purchaser would pay RM40 per kg for the imported breed compared to RM60 or RM70 per kg for other breeds.

> For the first time in 26 years, Abdul Manas Md Isa has not been asked to help in the sacrificial slaughter of animals for Hari Raya Haji, Utusan Malaysia reported.

Abdul Manas, 53, who is a ‘tukang sembelih’, attributed this to the Covid-19 pandemic which led to the government limiting ritual slaughter to just 10 animals at selected mosques or other locations.

Previously, he would be getting invitations one month before Hari Raya Haji.

Also known as Ustaz Manaz, he works at the Negri Sembilan Religious Department.

> Actress Tasha Shilla, who tied the knot in February, said that

she would no longer take on the role of seductress as in previous dramas.

“I feel that it is no longer suitable as I am now a wife, ” she told Kosmo!Tasha, 33, however, made it clear that her husband had never placed any restrictions on her acting career.

On her part, she wanted to make sure her family’s reputation was intact.

“After marriage, I began to realise even more that a wife should take care of her good name and that of her husband, ” she said. 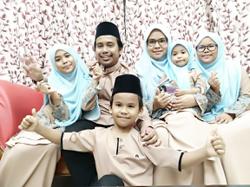 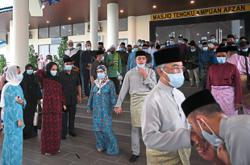