Sultan Ahmad Shah was all the more noble because of his humility, says Johor Permaisuri

In her heartfelt tribute to him on Facebook, she said it was common back in the pre-Internet days to see photos of Sultan Ahmad Shah, who passed away on Wednesday (May 22), mingling with the rakyat.

“It was not uncommon to see images and photos of Almarhum Sultan Ahmad Shah of Pahang, casually clad in a tracksuit, sitting quite at ease on the floor of a simple kampung home, chatting to an elderly man who was ill and who needed medical help,” she wrote.

“If there was a natural disaster in Pahang – most often, it was floods – it would be Almarhum Sultan Ahmad Shah who would be the first to be on the scene.

“For my family in Perak, we had become so used to seeing photos of him in the newspapers, always with his rakyat, that we did not see his unexpected appearance at a kampung house as anything uncommon,” she wrote.

Raja Zarith Sofiah, the daughter of Sultan Idris Shah II of Perak, recalled how the late Sultan Ahmad Shah discarded protocol during her wedding when it came time to decide who should begin the “merenjis” or blessings ceremony.

“He let my father – his uncle – begin the merenjis ceremony. He discarded protocol.

“He made his own decision: He was the Yang Di-Pertuan Agong, he was our King, and should rightly supersede all other Sultans, but he chose instead to adhere to his own values of being nobler by being humbler,” she wrote.

The Johor Permaisuri also talked about a very difficult time in her life – the passing of her fourth son, Tunku Abdul Jalil, who lost his battle with cancer in 2015 – and the impact that the late Sultan Ahmad Shah had on her family during those times.

“Almarhum Sultan Ahmad Shah was one of the first and most frequent visitors to see him and us, and to show us his concern and support.

“We did not expect a Sultan to show so much concern or care for our son; Jalil was someone he hardly saw or knew.

“The fact that his (Sultan Ahmad Shah’s) health had slowed him down, and he was not as strong as he used to be, made his presence there with our family all the more meaningful to us,” she said.

“There will be many other people who will have as many special memories of Almarhum’s words and actions.

“These are, however, our own and the ones which we shall never forget,” she wrote.

Perak MB: Flags in state to be flown half mast to mourn former Pahang Sultan 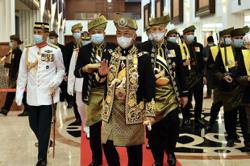 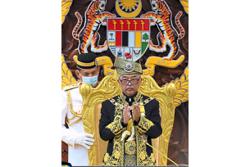