Man of the people: The late Sultan Ahmad Shah meeting Pahang supporters before the start of the second leg of the Pahang vs Johor Darul Takzim FA Cup semi final in May 2013.

Sultan Ahmad Shah was the longest serving FAM president. He replaced the late Tan Sri Hamzah Abu Samah in 1984 and led the association until 2014, when he was succeeded by his son, Al-Sultan Abdullah Ri’ayatuddin Al-Mustafa Billah Shah.

Under Sultan Ahmad Shah’s leadership, the M-League went through a rapid evolution, from a semi-pro league in 1989 to professional football in 1996. In 2004, it transformed into its current incarnation, the Super League.

In the last three decades, he oversaw the successes of the national squad, including the 1989 SEA Games gold medal, 1993 Merdeka tournament, gold medals again in SEA Games 2009 and 2011, and the AFF Suzuki Cup victory in 2010.

He also put Malaysia on the world map when it won the honour of hosting the FIFA Youth World Cup in 1997.

At the continental level, he had led the Asian Football Confederation (AFC) from 1994 to 2002, and was among the main figures behind the addition of places for Asian teams in the 2002 FIFA World Cup finals. 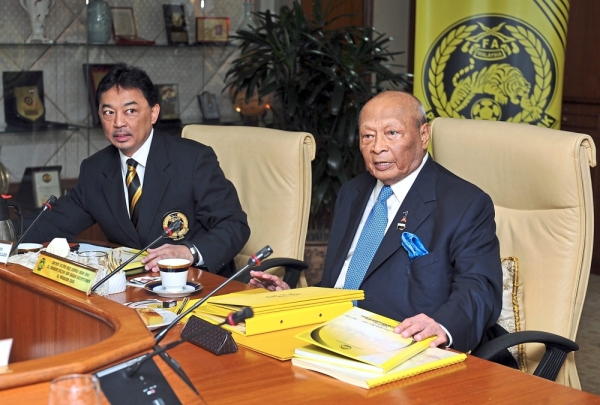 Royal sportsmen: The late Sultan Ahmad Shah, then the president of the Football Association of Malaysia, chairing a meeting at Wisma FAM in 2014 with his son, current King and Ruler of Pahang Al-Sultan Abdullah Ri’ayatuddin Al-Mustafa Billah Shah, who was then FAM deputy president. — Bernama

“He genuinely loved football, especially Malaysian football. He made sure he was updated on the national teams even when he was overseas,” said Windsor.

“A lot of people don’t know his contribution to the 2002 World Cup. He stood up against FIFA to get a larger quota for Asian teams. He also played a key role in getting Japan and South Korea to co-host the World Cup amicably despite the countries’ intense rivalry on and off the field.”

“Sultan Ahmad Shah was always a team player. He never drew attention to himself and worked well with everyone. There was criticism against him but he always took it in his stride.”

Sultan Ahmad Shah was also president of the Asean Football Federation (AFF) from 2011 until 2019, with the success of the AFF Suzuki Cup becoming the federation’s crown jewel.

Azzuddin, who worked with Sultan Ahmad Shah for 11 years as secretary general of FAM and AFF, said his boss was a man who had football first in his heart.

“I served him with FAM for six years and with AFF for five years. His legacy for football is evident. The AFC House in Bukit Jalil was his brainchild. It’s unfortunate that he passed away before seeing the completion of the new AFF building in Putrajaya,” said Azzuddin.

“He was such a noble person, and was generous and firm with his decisions. He was the type who followed the book.”

“He was criticised for the failure of Malaysian football but he never gave up and stayed on until the team delivered the 2010 AFF Suzuki Cup.”

Rajagopal delivered the SEA Games gold medal in 2009 after 20-year hiatus and then in 2010, he guided the national senior team to their first ever AFF Suzuki Cup title.

“I was given a free hand with the team. He was always supportive and very concerned about the team’s progress. All the effort paid off when we won the 2009 SEA Games and the 2010 Suzuki Cup,” said the 62-year-coach.

“He always called and checked on the team. He knew when to joke and when to be stern with the players.”

“I can’t forget the moment when we won the first leg of the AFF Suzuki Cup final 3-0 in Bukit Jalil. Sultan Ahmad Shah was very happy. He hugged me and we took pictures of the historical moment.”

“He was an easy person to work with as he was always jovial and looked after the people. He was also a good listener and made decisions after consulting people. Another thing is he just never gave up on the national team and never ran away from criticism.”

“He was in Jakarta for the 2011 SEA Games but due to security reasons, he could not be in the stadium. After the match, we immediately went to his hotel to show him the gold medal. He was very happy,” Ong recalled.

“He really loved football. You could see it when he talked to the players and motivated them. He always asked us to play for the national flag,” said the PJ City striker.

“He also ensured that the players’ welfare were taken care of. We received match bonuses on time. We all wanted to win the Suzuki Cup for him and I’m glad we did it.”

Sultan Ahmad Shah was also a keen hockey player, but was known for being impetuous on the field.

He was sent off in one game in his youth by Malaysia’s first accredited international umpire and former national player, K. Aryaduray.

Years later, when he was Yang di-Pertuan Agong, Sultan Ahmad Shah presided over an awards ceremony at Stadium Negara to honour those who had contributed to national sports.

The family of Aryaduray, who was the manager of the famous 1956 Olympic team and who passed away in 2011, recalled that when their father received his medal, the King leaned over and whispered in his ear, “I remember you; you gave me a red card”.

He then patted Aryaduray on the shoulder, and said, “Don’t worry, you did the right thing.”