An employee walking in the Musee du Louvre in Paris, which has temporarily shut. You can now go on a virtual tour of the museum. — AFP

Sightseeing is probably the last thing on most people’s minds as the world grapples with the Covid-19 crisis. As a matter of fact, you are now encouraged to just stay at home to curb the spread of the virus.

Around the world, many popular landmarks and destinations have shut down during this tough time, too. However, just because you’re stuck at home, doesn’t mean you have to completely abandon your wanderlust.

Instead, opt to go on a different kind of tour – the virtual one. Here are some interesting virtual tours that you can do from the comfort of your own home.

Go outdoors – virtually, we mean – at the Big Apple’s iconic vast green landmark. One of the world’s most beloved public spaces, Central Park is located in the middle of Manhattan. Thousands lounge on its green grass on warm days and walk on the forest-like paths of the Ramble. Other attractions here are the Alice in Wonderland statue and an outdoor theatre dedicated to John Lennon.

The virtual tour will walk you through the popular sites at Central Park as well as highlight important events that took place on its grounds. One of the world’s most beloved public spaces, Central Park is located in the middle of Manhattan. - AFP

Leave it to the Internet to come up with a meme of the Mona Lisa catching a breath in a deserted space. The world’s largest art museum has temporarily shut down when Paris went into lockdown recently. But you can still see many of its fantastic collections online, thanks to a variety of virtual tours on the museum’s website.

The Egyptian Antiquities tour, for example, showcases the Pharaonic period collection while the Remains of the Louvre’s Moat shows the museum’s past as a fortress. You can still see many of the Louvre's fantastic collections online, thanks to a variety of virtual tours on the museum’s website. - AFP

This national museum stunned the public when it opened its doors in 1759 and it is still the most famous museum in London today, receiving around 5.8 million visitors annually. Some of the venue’s more notable exhibits include controversial Parthenon sculptures, the Rosetta Stone and Sutton Hoo Ship Burial relics.

On a virtual tour of this renowned museum, prepare to be astounded by beautiful graphics. There are also cool interactive features such as a musical guide to the world.

The Parthenon Marbles, a collection of stone objects, inscriptions and sculptures, also known as the Elgin Marbles, are displayed at the British Museum in London in this file photo. - REUTERS

This world-class museum houses nearly 700,00 ancient Chinese imperial artefacts and artworks, easily making it one of the largest of its kind in the world. Some of the exhibits are kept by generations of Chinese emperors.

Designed in the style of a Northern Chinese palace, the museum is a must-visit for travellers to Taipei. With the virtual tour, you can see a rich media presentation of some of the museum’s past and current exhibitions. Fans of national parks should put the Grand Canyon on their travel bucket list. Big and beautiful, the Unesco World Heritage Site has some of the most magnificent vistas in the world. It is also home to a big range of flora and fauna, with the most famous animal here being the rare California Condor.

The virtual tour lets you discover ancient places within the canyon where people lived long ago. Check out interactive 360° photos that show archaeologists at work, along with their tools.

A rail holiday is a great way to reduce carbon emissions 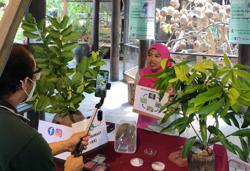