Nine Malaysian climbers stranded in Lukla and Kathmandu Nepal since March 23 are appealing to Wisma Putra and other Malaysians back home. - BERNAMA

A large group of Malaysians are currently stranded in Lukla, Nepal, unable to fly out after the country imposed a seven-day lockdown on March 24.

Nearly 100 climbers have been stranded since then, unable to fly out because of travel restrictions. In a report, an official with the Nepal Tourism Board said that they are currently coordinating with the Nepal Home Ministry to obtain permits to rescue the tourists.

Nepal announced on Tuesday that the country was on full lockdown, restricting movements to just essential services, after it reported a second case of Covid-19 infection. Prior to that, Nepal had already set rules to require all foreign visitors – as well as Nepali nationals and residents – who enter the country from March 14 to place themselves in self-quarantine for 14 days. Nepal had also stopped issuing visas to foreigners from March 14 to April 30.

On top of that, the country had shut its side of Mount Everest on March 13, following China's decision to shut the Tibetan route a day earlier. All Mount Everest climbing permits are now suspended.

In a letter to The Star, Yeoh Wan Xin, who travelled to Kathmandu with four friends on March 11, and later to Lukla on March 13 to start their trek to the mountain, said that as of early this week, there were 34 Malaysians currently in Nepal.

Based on her letter, the group has been trying to reach out to the Malaysian embassy in Kathmandu, but have so far only been told to "keep calm and obey local laws". 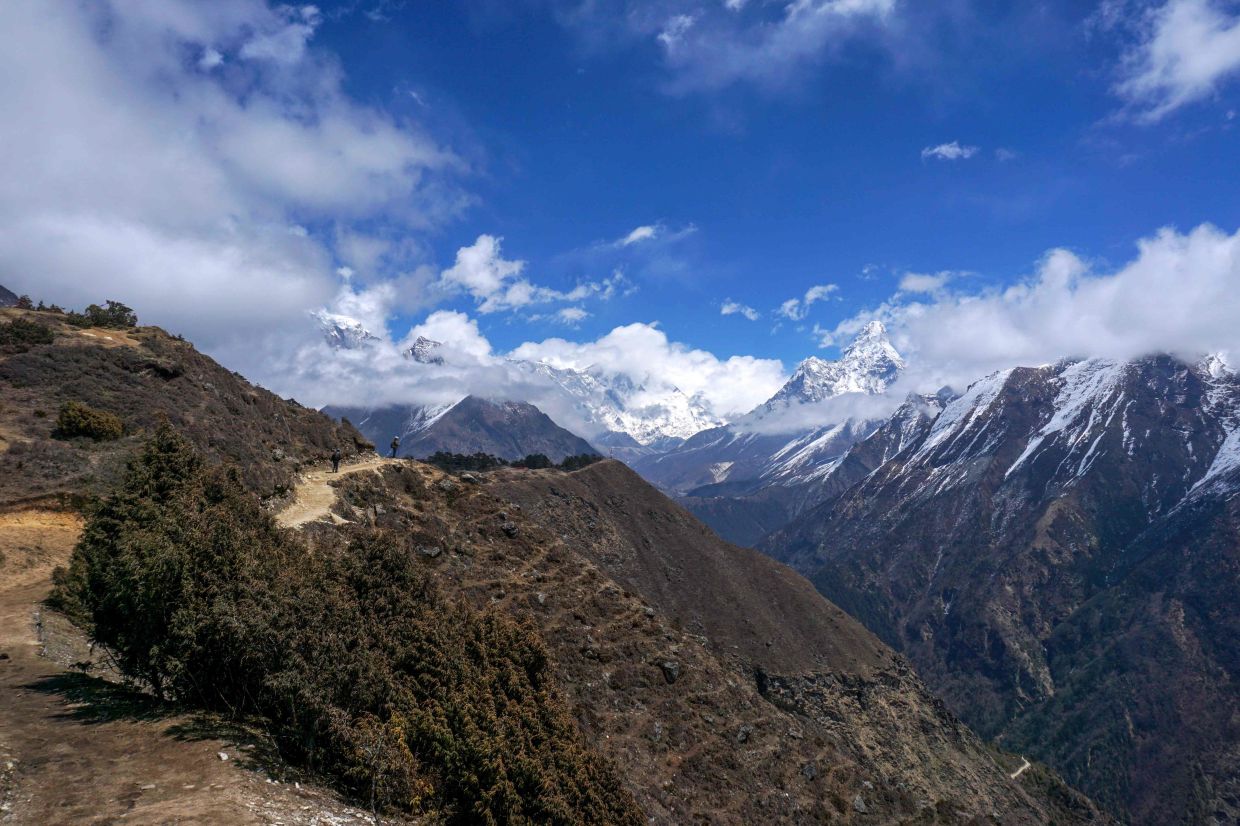 The path along the Mount Everest range is deserted during a government-imposed natiowide lockdown as a preventive measure against the Covid-19. - AFP

In an email, the embassy told The Star that they and the Ministry of Foreign Affairs (Wisma Putra) are aware that Yeoh, her friends and the other Malaysians, are stranded in Nepal. "The Embassy is in contact with all the stranded Malaysian in Lukla and we in a process to evacuate them from Lukla to Kathmandu," wrote Albony Basir, the third secretary of the Embassy of Malaysia in Kathmandu.

Meanwhile, the Embassy of Nepal in Kuala Lumpur told The Star that they do not have the full details of the stranded Malaysians in Nepal but are in communication with their headquarters.

In her letter, Yeoh said that the Malaysians are trying to stay in touch with each other via chat groups and social media but things are getting harder for everyone to do so.

"At the very least, those of us still in Lukla, where electricity is not stable and the weather is in single digits, and mineral water, Wifi and phone charging have to be paid for, want to go to Kathmandu where there are better facilities and access to medical treatment," she wrote.

To date, Malaysia, with the help of local governments, embassies and airlines, have already repatriated (or are in the middle of doing so) many stranded citizens from countries like India, Iran, Italy, Bangladesh and Cambodia. AirAsia and Malaysia Airlines have played crucial roles in providing flight services for some of these rescue efforts.

Let's hope that our fellow Malaysians in Nepal are able to get home safely, too. 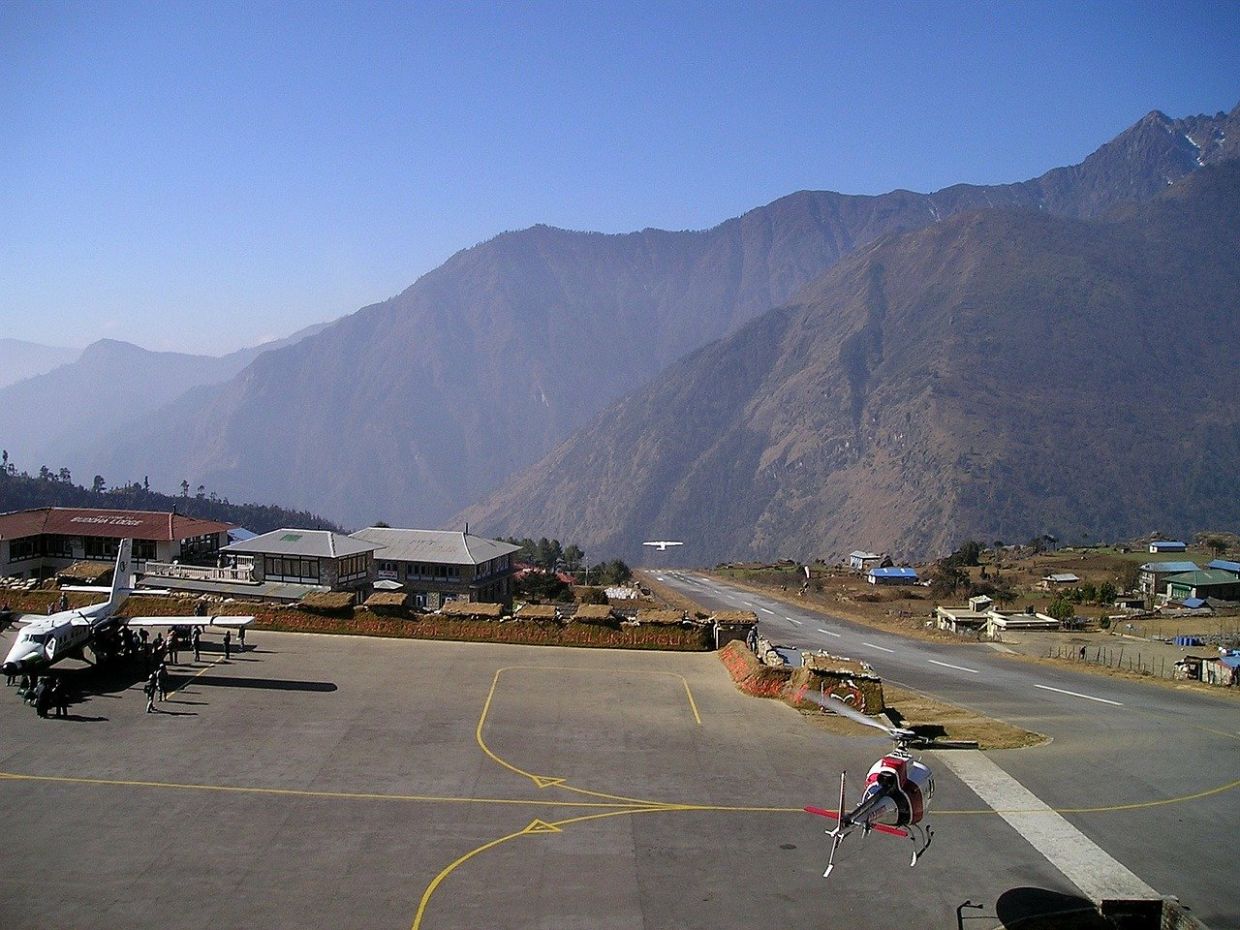 The Tenzing Hillary Airport in Lukla, Nepal. There are reportedly more than 30 Malaysians currently stranded in Nepal. - Pixabay

Below is an edited version of Yeoh's letter to The Star:

As I write this, only a rusty chain link fence separates me from the airstrip of what many regard as the world’s most dangerous airport, the Tenzing-Hillary Airport in Lukla, Nepal. It is Day 3 of lockdown for five of us Malaysians stranded in this picturesque mountain town situated 2,860m above sea level which is the gateway to Sagarmatha National Park, home to the Everest mountain range.

We first made plans to hike to Everest Base Camp in November 2018. Over the course of a year, we scrimped and saved. I took on weekend tasks to make more money. This is no Friday evening getaway to Malacca, after all. We trained hard, running before and/or after work, doing cardio, strength trainin and hiking at the many hills around Peninsula Malaysia. We even started taking the stairs at work – imagine the horror! We watched our diet and our health.

In January, Malaysia reported its first case of Covid-19. We were taken aback. What do we do? Some of us have made full payment. We have bought our gears and apparel. Flight tickets, travel insurance, leave applications were all sorted. All necessary arrangements have been made. Domestic yacks walk on a deserted path during a government-imposed natiowide lockdown as a preventive measure against the coronavirus, from Syangboche in the Everest region - AFP

In the media, attention was very much on Malaysian politics. Intermittently, coverage – albeit with a slightly xenophobic slant – was given to sporadic new cases of Covid-19. The masses were told to stay calm and wash their hands. That, we decided, we most certainly can do.

After discussing, and weighing the fact that there were no reports in Nepal, we decided to proceed as planned and we all coughed up whatever outstanding balance on the payment for our trip. We applied for and were granted our visas for travelling.

We flew to Kathmandu on March 11 and on March 13, we were at Lukla and started trekking. By no means was it a stroll in the park. There was the altitude. At night, we had the freezing cold to contend with as temperatures hovered around -5°c or sometimes lower. Our last shower had been on day one of the trek, when there had still been running water.

After about eight days and roughly 65km, we reached the Everest Base Camp. It was deeply moving. It had been gruelling and taken a toll on us. In the aftermath, we combatted fatigue, hypothermia, acute mountain sickness. But we did it all by ourselves. Now we return home. Or so we thought.

During our trek, when Internet access had been patchy, we got news that Malaysia was imposing a movement control order, whatever that meant. We were told to report ourselves to the embassy and we did so on March 16. In the meantime, flights were being rescheduled or cancelled. On March 18, the MCO was enforced. Our flights home on March 29 were cancelled. We were at risk of being stranded.

The plan was to keep calm, return to Kathmandu and decide on our next move. On the way down, we successfully contacted someone from the Malaysian embassy in Nepal. To our shock and disbelief, we were told that the embassy never received our list of names sent on March 16. It was hours later that a different person called back saying he did receive the list. This apparent lack of coordination and communication within such a small consulate certainly left us concerned. But we decided to keep the faith.

Within three days, we reached Lukla. Flights have been booked to fly to Kathmandu the next morning. We had to be at the Malaysian embassy and airline offices to sort out our return to Malaysia. Then, Nepal detected its second case of Covid-19 and the country took swift action to go under lockdown. There was to be no domestic land or air transport. A curfew was imposed and no one is to step outside their homes. The dramatic reaction stood in stark contrast to the dithering of our own government back home. I was deeply impressed.

However, that also meant that my fellow hikers and I were effectively under house arrest in our lodge at Lukla.

We contacted the embassy time and again for updates. All we hear is to keep calm, to obey local laws: “Apa boleh buat.” In short, nothing of use to us.

We have news that the French and Australian governments have tried to send in planes to get their citizens out of Lukla.

(On Thursday, as many as 192 French and German trekkers have been rescued by their respective embassies and governments.)

Meanwhile, our efforts at contacting the officials at the Malaysian embassy have gone nowhere.

We are sorely dismayed at how things are turning out. In the news we read that Malaysians stranded in India, Iran and elsewhere are being returned home. When we check on the Wisma Putra website, which has not been updated since March 18, there is no mention of Nepal.

To all Malaysians, let us all comply with the MCO. Perhaps then, when we manage to flatten the curve just maybe, all Malaysians abroad can finally return home.