A rail holiday is a great way to reduce carbon emissions

The Shinkansen in Japan is a great way to travel within the country, but tickets are not cheap. — Filepic

Going on a journey on the Orient Express used to be something of a bucket list item for some travellers, until the original railway company shut down in 2009.

In its early years (1900s), the service was the best way for folks in Europe to cross borders and travel internationally, though perhaps only the wealthy could afford to do so. In a way, this cemented the Orient Express’ reputation as a luxury railway service, which continued all the way up to modern times.

Today, some of the old carriages are still being used in Europe by the international travel and hospitality company Belmond, while in South-East Asia, the company runs an exclusive luxury railway travel service called the Eastern & Oriental Express. The E&O train routes cover Singapore, Malaysia and Thailand and tickets go from about RM8,000 per passenger.

That’s steep for many of us, but for those who can afford it may want to check it out some time next year or whenever it is wise to start travelling again.

My first train ride was about 30 years ago when, out of the blue, an aunt suggested that we all – my extended family – take the train to Beaufort for fun. These were the old Sabah State Railway trains that had been around since the 1900s; it is the only railway system in Borneo. The trains are still in service today, though some routes have changed and most of the carriages have either been refurbished or replaced. There’s also the North Borneo Railway, a twice-a-week deluxe service that’s purely for tourism purposes (passengers get a colonial-style tiffin lunch on board!). We lived in Penampang, Sabah which is about 20 minutes away from Kota Kinabalu and some of us kids had never been to Beaufort before. I was excited to go on the journey because I had always waved to passengers every time the train passed by – finally, I get to be the one “receiving” those waves!

I don’t remember much about the trip that day, though, only that the train was slow.

Beaufort is a 90-minute drive away from town; that train ride took three hours one way, which, to a child would seem like “forever”. Once we arrived in Beaufort, we went for lunch and to the tamu, a weekly farmers’ market. (Travel Tip: First time in Sabah? Remember to check out a tamu!)

We went straight back to the station after that because the adults wanted everyone to be home before it got dark. In case you didn’t know, nightfall in Sabah is an hour earlier than in the peninsular.

Since then, I have always been interested in rail travel and have been lucky enough to experience the different types of trains overseas. For example, the Shinkansen or bullet train in Japan. On a work trip there more than a decade ago, a group of us travelled to Kyoto from Tokyo on a swanky bullet train. As expected, the train was clean and the journey was smooth. The Shinkansen in Japan is a great way to travel within the country, but tickets are not cheap. — Filepic

Unfortunately, as the train moved really fast, it was difficult to take pictures – at least good ones. And since this took place before the age of smartphones, there was nothing much for us to do on board save for sleeping and reading a book. If you wanted to have a conversation with your seat neighbour you had to do it in hushed tones because, well, it’s the polite thing to do.

This was in stark contrast with the train ride I took with friends from New Delhi to Agra in India 10 years ago. The carriage was so loud that we had to raise our voices among ourselves just to be heard.

Now a train ride in India for international tourists seems like a bad idea but it really isn’t. You’d be prompted to buy “VIP tickets” (don’t worry, they’re still very affordable) as seats on the other classes/categories are mainly reserved for locals who need to take the train on a daily basis.

While the seats on the VIP class were comfortable and clean enough, the same can’t be said of the toilet, although it still wasn’t the worst I had ever encountered. The need to go to the toilet is one of the biggest challenges of travelling and often, we can’t ignore it. 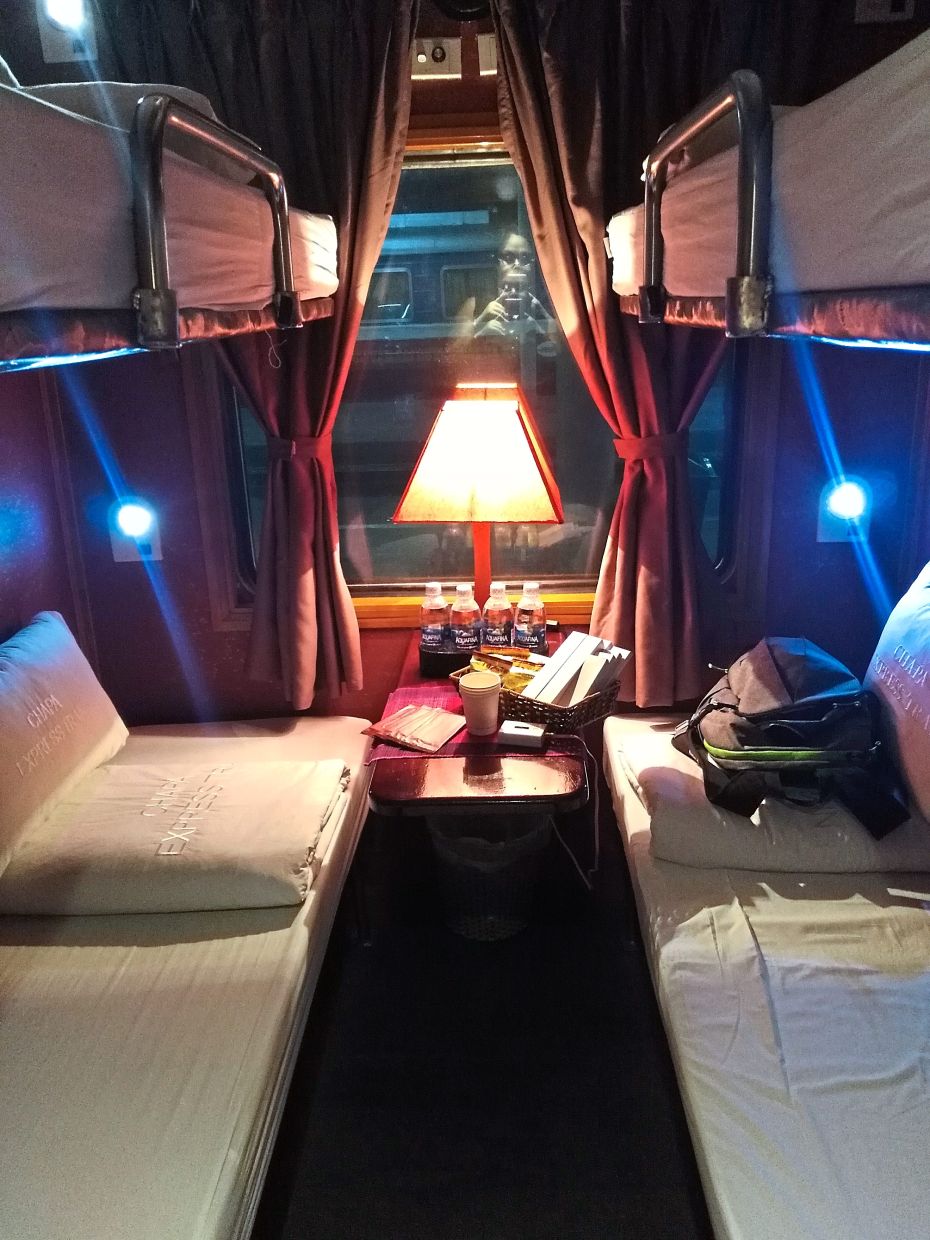 The cabins in the overnight trains in Hanoi were kept clean and tidy for passengers.I encountered the same challenge on an overnight sleeper train from Hanoi to Sapa in Vietnam three years ago. A sleeper train is like a railway red-eye service where you board at night and arrive in the morning just in time for breakfast. Lots of tourists and locals do this in Hanoi as it is the cheapest mode of transportation for long-distance domestic travel.

Again, I was prompted to buy the VIP tickets, but they were sold out so I had to take the “soft berth” tickets instead. This is basically a four-berth cabin, meaning you would have to share the space three strangers. You can opt to have the whole cabin to yourself – you just need to pay for the three extra berths!

I was a solo traveller back then so I was a little apprehensive about sharing a “room” with strangers but things turned out well in the end. Two ladies turned up just as I had nicely tucked myself in on the lower bunk bed. A man came later saying that I was in his space but somehow, my roommates managed to turn him away!

I was grateful for that because I don’t think I could have handled being on the top bunk all too well. The train ride was incredibly shaky and loud; it was difficult for me to sleep throughout the seven-hour-or-so journey. The overnight train ride from Hanoi to Sapa in Vietnam is very popular with tourists. — Photos: MELODY L. GOH/The StarI would have loved to see the views outside but since we travelled at night, everything was dark. We stopped at several stations and each time I peeked out our window, all I could see were shadows. That was kind of scary.

About 45 minutes before we reached our final destination (Lao Cai train station), music is played over the intercom to wake us all up. To be safe, my roommates and I took turns to go to the bathroom – there were toilets, as well as common rooms with sinks for you to wash your face/brush your teeth in each section of the train. My advice is to go early as the place can get pretty wet, gross and smelly towards the end!

When we finally reached Lao Cai the sun was not out yet but station was already buzzing with activity. Remember to book your ongoing ground transport to Sapa prior to your trip because otherwise you would have to be really quick to book a spot on the earliest bus or van with locals and other forgetful tourists.

The ride to Sapa from Lao Cai takes another hour or so (mine was longer because the van broke down mid-way) but as you inch closer to the hills, the scenery drastically changes and everything looks so serene.

Hopefully, by then, you would have forgotten about the smells of the train toilets and move on to more lovely things. Go virtual

In 2016, Expedia released the Virtual Flam, a 360° virtual look at what a ride through the Flam railroads in Norway – known as one of the steepest tracks in the world – would look like. It was made in conjunction with Flam Railway’s 75th anniversary and features some of Norway’s most beautiful landscapes.

The original video, which was 44 minutes, no longer exists, though a handful of other 360° virtual train ride experiences have popped up since then and can be viewed on YouTube. There are also many “driver’s eye view” videos of train rides from around the world, some of which are quite mesmerising.

It is currently not safe to travel anywhere and we recommend putting off all travel plans in the next few months. In the meantime, we welcome submissions from our readers. Your story – experiences, tips – should be 700 to 800 words long in Word or Text format. Please attach at least five photos (1MB, captioned) in a separate e-mail.

We also accept photo essays. Send us at least eight hi-res pictures taken during a holiday, and include detailed captions for each item. Photos must always focus on the destination (for example, photos of sunsets, beaches, food, local folks, costumes, traditional dances, nature), so please don’t just send us your selfies and wefies! 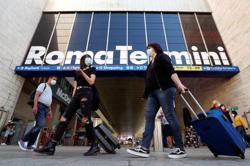 Italians on the move again as lockdown restrictions ease