Training together for two months not only helped the cast members of Netflix K-drama My Name to hone their physical skills but also to form great friendships.

South Korean actor Ahn Bo-hyun said this during a video press conference recently: “Thanks to the training, we were able to easily develop a sense of camaraderie... and I was able to film comfortably on set.”

It was revealed that during their training, he and cast members such as Han So-hee, Park Hee-soon, Lee Hak-ju and Jang Ryul would all hang out and, in turn, they’ve really got to know one another.

Apparently, they even started their own group chat and would often check on each other whenever they don’t get to meet.

Perhaps due to this closeness, the 33-year-old star confessed that after filming My Name he realised that he has become more open about his emotions.

He mentioned: “In the past when I have any problems or I’m experiencing any sort of trouble, I will try to resolve it myself. I will shut the door, so that nobody else sees it.

“But these days, I have changed a bit. I will share my thoughts and feelings with my closest friends or with someone who’s older than me, so that I’ll be able to get their advice.

“So, I think that was the change that I experienced from this project.” In the series, Ahn plays detective Jeon Pil-do, who ends up partnering with Han’s character – a woman out for revenge – as they work together at the police’s narcotics unit.

Describing Pil-do as a capable man with a strong sense of principle, Ahn pointed out: “Since my character is the ace of the unit, he has to be good at everything. He has a strong set of values and he’s very focused on wiping out the drug cartel.”

Although the 186cm-tall actor used to participate in amateur boxing competitions in high school and knows a thing or two about physical training, he admitted that preparing for the action scenes for My Name was totally different.

“We had to be in sync all the time (when doing the action sequences) to make sure no one got hurt. I would take videos and share them with the other cast members and we’d try to synchronise our moves.”

Ahn also helped co-star Jang as the latter worked hard to lose almost 10kg for his role as the power-hungry, lean baddie Do Gang-jae.

Jang stated: “Ahn Bo Hyun taught me about diets and exercise methods (so I could lose weight healthily).”

Ahn recalled that the biggest challenge working on My Name was the weather: it was really cold as the series was shot in winter.

“We were using hot packs and wearing heated clothing underneath, but it was still so cold.

“That was really tough. But there was such great synergy and energy on set, so the overall experience was very pleasant.”

Starting out as a model, Ahn has been acting since 2014, appearing mostly in minor roles.

The industry began to take notice of him when he starred opposite Park Seo-joon in the 2020 hit drama Itaewon Class.

Although he played a despicable young man in that series, Ahn lent his character both complexity and vulnerability, which made him a far more layered person than a one-dimensional villain.

This year, besides My Name, Ahn can also be seen in the romantic drama Yumi’s Cells, headlined by actress Kim Go-eun. 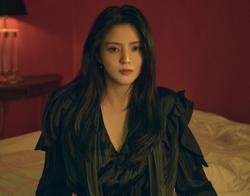