Childhood friends Sang-woo and Gi-hun are forced to go against each other in 'Squid Game'. Photo: Netflix

Korean actor Lee Jung-jae is known for portraying cool and charismatic characters on screen, as seen in drama Chief Of Staff and films Assassination, Along With The Gods and the 2020 film Deliver Us From Evil.

However, in the new Netflix series Squid Game, Lee plays, well, a loser, as described by the series’ writer-director Hwang Dong-hyuk.

“Lee’s character in Squid Game doesn’t have any charisma, and is a total failure in life, a loser,” Hwang informed StarLifestyle during a video interview session with the Malaysian press.

“People were actually worried when I cast Lee in this role, and some had doubts about him.

“But you’d see, when watching this series, that this cool, handsome actor pulled it off so perfectly. I was amazed... it was a lot more than what I expected. I think he brought to life the most lovely loser in the best way possible.”

Even Lee himself was a little taken aback with his performance when he viewed the final cut of the series.

“I was laughing so hard, because I was so surprised to see myself... I thought that I was like brainless or something,” confessed the 48-year-old.

Lee further shared with StarLifestyle that although he’s involved in creating a character’s looks on other shows at times, he didn’t interfere at all for Squid Game.

“I literally did not say anything regarding how my character would look. I did what I was told and I wore what was given to me.”

In Squid Game, Lee plays Gi-hun – a jobless, divorced man, living off his old mother and is in deep debt due to his gambling problems.

Unable to pay the loan sharks nor able to be a good dad to his little girl, Gi-hun is at his wits’ end.

At his most desperate, Gi-hun receives an unbelievable offer – a chance to take part in a six-round game where the prize money is 45.6 billion won (RM161mil), and the winner gets to take it all.

Unknown to him and the other 455 contestants, there is a catch: the six rounds may be made up of children’s games, but if the participants lose, they end up paying with their life.

This contrasting scenario between a children’s game and the deadly situation is exactly what piqued Lee’s interest to take part in Squid Game.

Add on the fact that Gi-hun is unlike any character Lee has ever played before, it was an easy yes for the popular star.

“There are various emotions and situations that are all played out in an intriguing way in the series. I thought it would be a fascinating story to explore,” mentioned Lee. 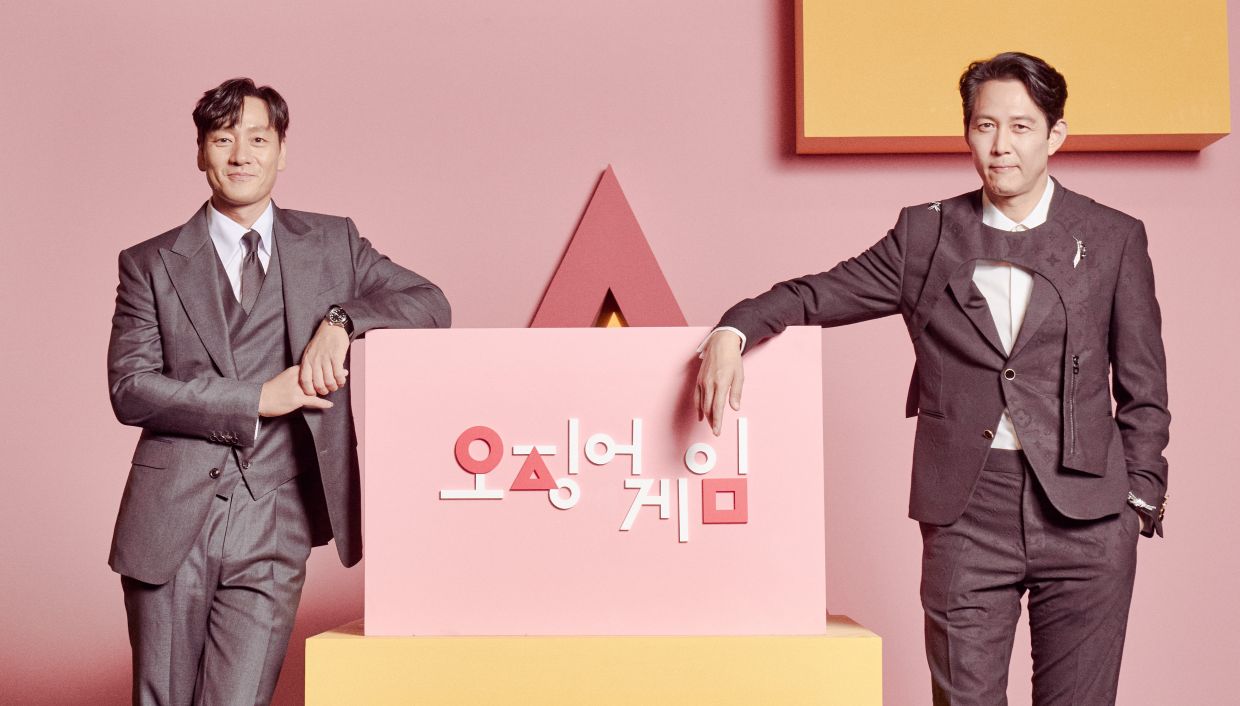 Park Hae-soo and Lee Jung-jae (right) say the originality of the story behind 'Squid Game' is one of the reasons why they signed up to star in the series.

Similarly, co-star Park Hae-soo (Time To Hunt, Prison Playbook) was drawn to Squid Game because of the original idea it brought to the fore.

“The fact that through children’s games, the deepest and darkest desires of adults would be portrayed and explored, I was just really drawn to that irony.”

Park, who turns 40 this year, also commented how Squid Game is a thought-provoking show: “The basic setting of Squid Game is a survival competition. But there are so many layers to it.

“When you look at the characters, they all come from different backgrounds, but they’re people who have lost something that’s very important in their lives.

“I think there’s a lot of messages that the characters bring forth. It could be hope, it could also be how in an extreme situation, human desires are expressed through rage or anger, and how there’s betrayal of one’s values and conscience.

“At the end of the day, this show poses a question in terms of what really makes us human, or what is the essence of human.”

In the series, Park plays Sang-woo – a calm and calculated man who knows how to assess a situation and comply accordingly.

Unlike his childhood friend Gi-hun, Sang Woo was on the path of success as a team leader of an investment company despite his poor background. But, he ends up in the same game as Gi-hun, after making a few wrong investments which lands him in a mountain of debt.

According to director Hwang, Park’s character is probably the most difficult to tackle for an actor.

“Sang-woo hides a lot of his feelings – desire, fear and a sense of superiority – when he’s grouped with people he considers as losers.

“He can’t really accept that he’s facing the same fate as all the other people in the game,” Hwang told StarLifestyle.

“All of that must be expressed in a really subtle way, hidden from the others. And Park Hae-soo pulled it off so well; he brought 120% to the role.” Very little CGI was used and the sets were kept real.

Other than the actors’ top-notch performances, the other noticeable thing about Squid Game is the visuals the show presents.

Both Lee and Park noted they were impressed with the huge sets that were built as the playgrounds for the six games.

Lee said: “When I read the script, I was really curious how the set was going to look like. The art team went far beyond my expectation.

“I didn’t think it was going to be that huge. I thought that the series would use a lot of computer graphics, but the sets were built for real. And 456 people actually took part in it.

“So, the scale was amazing. It was almost overwhelming.”

Director Hwang explained that he wanted to use minimum amount of computer graphics and built actual sets as he wanted the actors to be physically present in each game, which he felt would enhance the realistic elements of the show.

At the same time, Hwang wanted to create a dream-like imagery with each set, hence the colours are bright and inviting, not unlike children’s playgrounds, to add on the absurdity and the brutality of the situation the participants find themselves in. 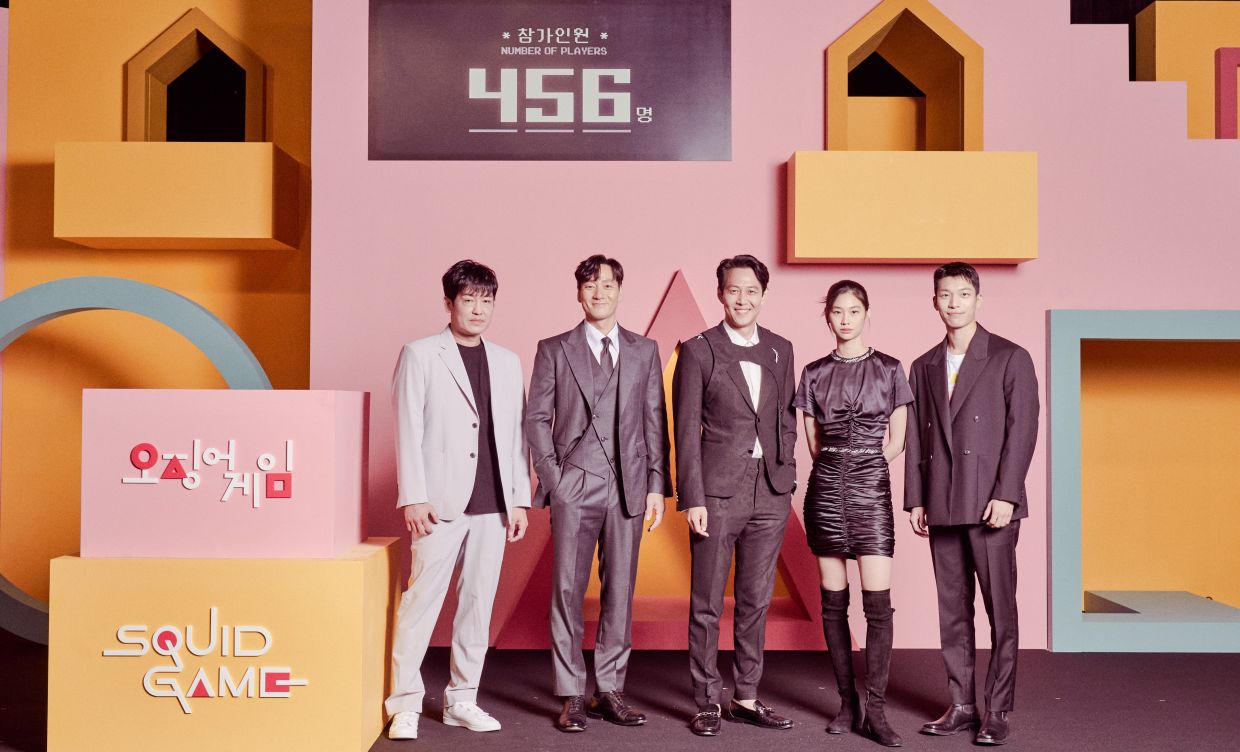 This also meant that the actors had to literally play the games, like for real.

Lee divulged that Squid Games was physically challenging for him.

“There was a lot of action in Squid Game. Even just participating in the simple games, it felt like an action sequence because there was a lot of physical movement involved, and also a lot of fight scenes.

“It was actually even more than what I had expected. So that was definitely challenging.

“One of the most difficult scenes was when I had to do these action sequences and fight in heavy rain,” Lee said.

Park continued: “We actually went through about two to three seasons for the whole shooting period of Squid Game. So, there were days when it was really hot, and some that were very cold. Park (left), Lee and Jung Ho-yeon in a scene from 'Squid Game'.

“And as you’ve seen in the trailer, the tracksuits we wore were quite comfy, but not very cool.

“So, you get quite hot as you do a lot of motions, and actions. Also, there was obviously a lot of people on the set.”

Despite the many challenges, the actors stated they are proud of the project that’s an allegory of modern capitalist society.

Here’s what Hwang hope for the audiences to take away after watching Squid Game: “We are in a severe competition in our day to day life.

"While the show presents a different competition than what viewers are experiencing in their daily lives, I hope – after watching the show – viewers will ask themselves this, ‘Why do we have to compete all the time; where did this all start and where is this leading us to?’

“Maybe also think about why we’re in this situation. I hope this kind of questions will pop into viewers’ heads after watching the series.”

All nine episodes of Squid Game are available on Netflix.