Director Hwang Dong-hyuk admitted he auditioned a lot of actresses for the role of Sae-byeok for his new Netflix series Squid Game, but no one felt right.

That is until he received an audition tape from top Korean model Jung Ho-yeon, which the latter recorded in New York where she was walking the runway for the New York Fashion Week.

“When I saw the self-tape from Jung, I knew straightaway that she was the perfect fit for Sae-byeok,” said Hwang during a virtual press conference in South Korea that StarLifestyle was invited to.

“I felt it right away – the tone of her voice, the glare and the aura, everything was perfect.”

So convinced was the director of Jung as Sae-byeok, that he wanted to meet her in person right away to confirm that his impression was accurate.

Fortunately for Hwang, Jung was equally keen to play the role of a jaded North Korean defector in Squid Game, that the 27-year-old took the next flight out to South Korea from New York to meet Hwang.

The busy model also cleared her schedule so she could concentrate on Squid Game.

“I really wanted to be part of this series, so I put a lot of thought and energy into practising (Sae-byeok) lines for the audition tape,” shared Jung, who is making her acting debut with the series.

She revealed further: "When I started reading the script, it was late at night. And I read it until the morning, in one sitting. I stayed up all night reading it; that's how great the story is."

After getting the job, Jung completely immersed herself in the role of Sae-byeok – a woman who’s had more than her fair share of problems and tough days.

Part of that preparation was taking lessons to master the North Korean dialect, in which Sae-byeok speaks in with certain people.

Jung explained of her character: “Sae-byeok pickpockets to make a living. But she needs a lot of money if she wants to be with her family. And, that is how she ends up taking part in the game."

Squid Game centres on 456 cash-strapped men and women who are recruited to participate in a deadly survival game.

If they make it through six rounds of games, the winners will get to keep the prize money amounting to 45.6 billion won (RM162mil). If they lose, they are eliminated... literally.

The nine-episode series starts streaming on Netflix on Sept 17, at 3pm. 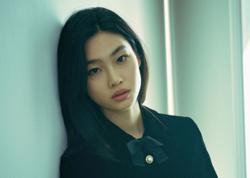