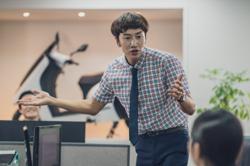 After being on Running Man for 11 years, it’s understandable Lee Kwang-soo is unable to let go of his “training” when he showed up for a new variety show.

Lee, along with his co-stars of the upcoming movie The Pirates 2, appeared on the first episode of House On Wheels' spin-off called Lending You My House On Wheels.

Unlike actors Kang Ha-neul and Han Hyo-joo who preferred to take it easy while doing whatever activity they're supposed to do, Lee seemed to want to get moving and do something, and quickly too.

A Korean news portal translated the exchanges between the three of them in the Sept 13 episode.

When Kang told Lee that he’s working too hard and Han agreed by asking Lee to just stay still for a moment, Lee couldn’t comprehend their requests that he take a break.

He simply informed them: “I’ve been running around without staying still for 11 years.”

And when the three of them went shopping, Lee rushed around the supermarket looking for items as if he had to complete the task within a set time.

“There’s no mission here," Han said to Lee. "You don’t have to find things as fast as possible. It seems like you’ve really gotten used to doing things (like on variety shows).”

Lee said: “You’re right ... I think it’s an occupational hazard – it feels like if I find the bread really fast, I’ll come in first place.”

House On Wheels started with actors Sung Dong-Il and Kim Hee-won driving to various locations with a wheeled home attached to the back of their vehicle.