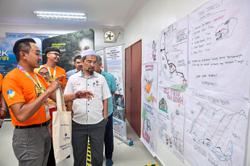 Sulaiman (in white shirt), pictured here during the Kenyir Lake tour guide course, says logging near the waterfall has been suspended until its waters are pristine again. – BERNAMApic

KUALA BERANG: The Terengganu Forestry Department has temporarily halted logging activities in the area near Kenyir Lake, said to be the cause of murky water at the Sungai Lasir waterfall.

State tourism, culture and information technology committee deputy chairman Sulaiman Sulong said it was understood that logging activities in an area about 4km upstream of Sungai Lasir had been halted as soon as the pollution issue was reported in the media.

According to him, logging has been suspended until the waterfall, a focal point for tourists to Kenyir Lake, is pristine again.

"The Forestry Department has taken immediate alternative actions to ensure that the logging activities... can be prevented or minimised.

"At the same time, the heavy rain is also believed to have caused the water to turn murky,” he told reporters after officiating the closing ceremony of the tour guide course at Kenyir Lake on Wednesday (Sept 14) afternoon.

It was reported earlier in the day that the water of the Sungai Lasir waterfall at the recreation forest at Kenyir Lake was murky and the cause was believed to be nearby logging activities.

In a statement the same day, Mentri Besar Datuk Seri Ahmad Samsuri Mokhtar said the murky water was because of heavy rain, not logging activities.

He said activities related to forestry and logging were bound by conditions, including maintaining a suitable distance between the logging area and bodies of water. – Bernama