The declassified report attached a letter sent by Boustead Naval Shipyard (BNS) on July 8, 2010 to Ahmad Zahid, who was the then-defence minister, asking for a letter of intent (LOI) on the LCS project.

ALSO READ: Ahmad Zahid: Don't blame me for LCS issue, it was after my time as defence minister

The letter from BNS was signed by former navy chief and then BNS managing director Tan Sri Ahmad Ramli Mohd Nor, who is now facing three criminal breach of trust (CBT) charges over the issue.

In the letter, Ahmad Ramli said BNS had made plans to begin construction for the LCS project – which would take two years – and they needed a mandate from the government to ensure the OEMs' confidence to commit to the project.

Ahmad Zahid had jotted on the top right corner of the letter "SUB perolehan, sila laksanakan" (Under secretary of procurement division, please execute), along with his signature in the letter.

Ahmad Ramli had said that the BNS required an LOI from the government consenting to original equipment manufacturers (OEM) for the LCS project.

"Any support and assistance from Datuk Seri on this matter is much appreciated," the letter read.

The summary of the declassified report mentioned that after the July 8, 2010 letter by BNS was sent, Ahmad Zahid gave the green light to BNS with his "sila laksanakan" endorsement on July 9, 2010.

It also mentioned that BNS had been trying to acquire an LOI from Putrajaya since 2008 after having several discussions with then-defence minister Datuk Seri Najib Razak.

Najib then requested the Finance Ministry to issue an LOI to BNS on Jan 15, 2008.

Though it is unclear why the LOI request was not approved, the report stated that BNS attempted to engage Najib till June 2009, even though the Pekan MP had become Finance Minister by then.

On Aug 7 (Sunday), Ahmad Zahid said the fiasco on the procurement of LCS should not be pinned on him as he was not the defence minister when the project was awarded.

Ahmad Zahid said anyone involved in the issue should provide an explanation to the PAC.

The report on the investigation was led by former auditor-general Tan Sri Ambrin Buang.

The LCS controversy gained momentum over the past few days after the PAC revealed that none of the ships had been completed so far, although five should have been delivered by August 2022.

These were among the findings contained in the bipartisan committee's 250-page report that was tabled in the Dewan Rakyat on Aug 4. 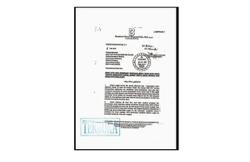