“Several facts in the report were redacted by the Prime Minister’s Department. But as a whole, it does not affect the overall report.

“Nevertheless, the PAC’s stand is that the redaction of the report was unnecessary,” he said in a statement on Wednesday (Aug 17).

Wong added that the redacted information was related to the director and shareholders of Boustead Holdings Bhd, Boustead Naval Shipyard (BNS) and Perstim Industries Sdn Bhd.

“This is open information and it can be found via a Companies Commission of Malaysia (SSM) search.

“The PAC is still waiting for a forensic audit report on BNS to be declassified, in line with the Cabinet's decision.

Wong also said it was the Cabinet’s decision on Aug 10 to order the Prime Minister’s Department to declassify the report, in line with PAC’s recommendation on the initial LCS acquisition report that was tabled in Parliament on Aug 4.

The report was prepared by the Investigating Committee on Procurement, Governance and Finance, headed by former auditor-general Tan Sri Ambrin Buang.

The LCS controversy gained momentum over the past few days after the PAC revealed that none of the ships had been completed so far, although five should have been delivered by this August 2022.

These were among the findings contained in the bipartisan committee’s report that was tabled in Dewan Rakyat on Aug 4. 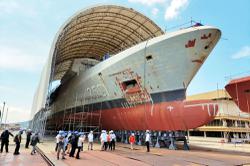