It further added that another RM50mil in loans was obtained by Boustead Holdings Berhad (BHB).

"The debt-ratio analysis to measure the percentage of assets financed by debts found a worrying trend.

ALSO READ: Ahmad Zahid: Don't blame me for LCS issue, it was after my time as defence minister

"BNS is expected to face difficulties and inability to pay its interest and debt in the long term if its financial situation continues to be weak," read the LCS report by the Special Investigating Committee Report on Procurement, Governance and Finance.

The report further mentioned that BNS had limited financial capability to carry out the project.

It also stated that BNS had applied for a deposit of RM1.8bil or 20% of the contract value to kickstart the LCS project.

"The deposit was needed by BNS to pay original equipment manufacturers (OEM) and suppliers for the acquisition of parts, services for the design and engineering estimated at RM1.9bil," it said.

However, the Finance Ministry did not grant the full amount requested by BNS and instead approved RM1.365bil or 14.95% of the total contract value, which was RM9.128bil.

"The Finance Ministry also gave an exemption for bank guarantees amounting to RM836.9mil for the approved deposit," the report read.

The investigating committee of the report found that the Finance Ministry's approval of RM1.365bil to BNS and bank guarantees exemption to be out of the ordinary of the Treasury Circular and procurement regime that stated the government cannot provide deposit payments of over RM10mil to any local manufacturer or supplier.

"This shows that the company (BNS) had limited financial ability to carry out this acquisition," said the report.

Meanwhile, the declassified report cited BNS' financial statements in 2015, 2016 and 2018 had losses amounting to a whopping RM462mil, affecting the company's equity (with RM130mil of paid-up shares) to negative RM332mil.

It was also mentioned that BNS' poor financial management and cash flow issues had caused payments to the OEMs and suppliers of the LCS project to be delayed.

"As a result, these companies refused to supply raw materials and parts, Stalling construction work at the shipyard.

The LCS controversy gained momentum over the past few days after the PAC revealed that none of the ships have been completed so far, although five should have been delivered by August 2022. 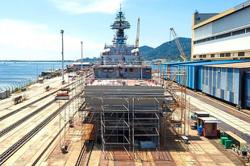