“Previously, silat did not receive much attention as some were under the impression that it is just a village art of self-defence, but the film has changed that perception,” said the trainer.

He added that he expects the number to grow after the association’s enrolment programme.

Ahmad Shafiq said given the impact of the local hit movie, it will not be surprising to see parents sending their children as young as five years old to learn the art.

He added that there are also adults aged 50 interested in taking up silat.

> Shuib Sepahtu says he needs space to lead a peaceful life after the loss of his wife, singer Siti Sarah Raissuddin.

“It has been 10 months since Sarah left me and the children. It is an unusual feeling. Sometimes I don’t know how to articulate it.

“There hasn’t been a day when I do not think of Sarah. It is difficult to carry on with life and that is already pressure on me,” the 37-year-old comedian-entrepreneur told Kosmo!.

“I thank those who care for me but sometimes when it comes to talk of a partner, love or befriending someone, I feel pressured.

Shuib, whose real name is Shahmira Muhamad, also said he does not want his children to be affected by comments on social media.

Siti Sarah passed away aged 36 on Aug 9 last year from Covid-19 shortly after giving birth to their fourth child, a boy. 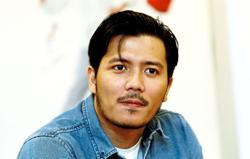