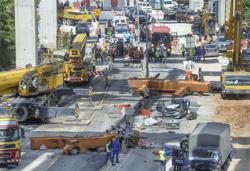 Kuala Lumpur Fire and Rescue Department director Nordin Pauzi said the body of the victim, identified as Mu Tong Zheng, a Chinese national, who had previously reportedly fallen and was caught between the tracks under construction, was extricated by firefighters at 3.58am.

He said that previously the victim could not be extricated as firefighters were facing difficulties due to the unstable construction structure, and the victim was stuck between the construction beam and the gantry crane structure.

“We went up (the structure) at about 3am to make a risk assessment before three firefighters in personal protective equipment suits went up and brought down the man’s body using a crane.

“The operation to retrieve the victim took half an hour, and the body was in a state of decomposition,” he told reporters at the scene here.

Nordin said that, with the last body retrieved, the three-day rescue operation which began on Monday has been completed, and the case has been handed over to the Department of Occupational Safety and Health (DOSH) for further investigation.

On Monday (March 22), three Chinese workers were killed while a local driver was seriously injured following the incident, where one of the gantry crane components at the highway construction site fell and crushed a moving vehicle. - Bernama 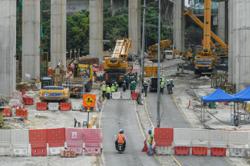