Work at the SUKE construction site in Cheras has stopped pending a safety audit.

STEPS are being taken to ensure that the elevated ramps at the Sungai Besi-Ulu Kelang Elevated Highway (SUKE) are safe.

“We are in the midst of ensuring the structure is intact so no further accidents occur, ” said a spokesperson from highway concessionaire Projek Lintasan Kota Holdings Sdn Bhd (Prolintas).

Three workmen died and three others were injured following a crane collapse on March 22.

At press time, Fire and Rescue Department personnel were still trying to retrieve the last body at the site.

One of the injured was a motorist who was driving past the site when the crane fell from a height of more than 36.5m.

Works Minister Datuk Seri Fadillah Yusof had ordered that work at the site stop immediately to allow for a safety audit.

The Prolintas spokesperson said they could not disclose if the three workmen who died were insured.

“We have to check with the contractor who hired them, ” he said when contacted by StarMetro.

Cheras MP Tan Kok Wai, who visited the site, called for an independent inquiry to be set up to investigate the incident.

“The frequent accidents involving the construction of SUKE has raised doubts among the public about its safety.

“We question if competent safety officers are stationed on-site to monitor the work and ensure no untoward incidents happen, ” he said, while calling on the minister to issue a stop-work order for the entire 24.4km expressway to ensure public safety.

He added that the Occupational Safety and Health Act 1994 should be revised to include stricter rules on highway construction, with heavier penalties for offenders.

A notice at the site stated that a 100m stretch of the road was closed. 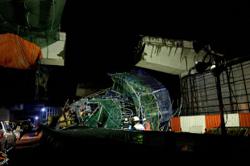