KUALA LUMPUR: A stop-work order has been issued and an immediate safety audit ordered on the Sungai Besi-Ulu Kelang Elevated Expressway (SUKE) site where a crane toppled, killing three workers, injuring two others as well as a member of the public.

The last is a Malaysian man who was the driver of a car, and he has been described as “gravely injured”.

Works Minister Datuk Seri Fadillah Yusof said only rescuers would be allowed at the scene, a SUKE site in Cheras.

“The contractor and their safety team must also come up with suggestions for better safety measures if they wish to continue with the project.

“The road here will be closed while an alternative route is being located. If no route is found, they have to explain to us how they will ensure safety while construction work is ongoing.

“Maintenance work was being carried out when the crane collapsed. Now the priority is to stabilise the site, ” he added.

Fadillah, who visited the accident site yesterday, said an investigation to be conducted by the Malaysian Highway Authority and Construction Industry Development Board (CIDB) would also check why the roads were not closed to the public before such heavy construction work was carried out.

The former is the regulator for the building of all highways while CIDB is the authority overseeing all construction site operations.

The minister said he was angry and saddened by the multiple accidents at construction sites, causing the loss of lives, despite continuous warnings to contractors.

“We are authorised to blacklist or suspend contractors from any future Works Ministry tenders for at least two years if they are found not to have followed the SOP (standard operating procedure).

“We will investigate whether the SUKE contractor in the latest accident followed the SOP.

“I want strict action to be taken if the contractor is found to have been negligent in safety, not only of their workmen but also of the public.

“If the construction has to be halted to complete the investigation, so be it, ” he said.

He pointed out that all contractors were required to have insurance policies for the safety of the public and their workmen prior to starting work, to enable compensation should accidents happen at a work site.

Earlier, Fadillah presented “letters accepting tenders” for projects worth about half a billion ringgit to contractors at the Works Ministry.

In the SUKE incident, a Malaysian motorist was badly injured and two construction workers died after falling 120m to the ground.

This is the second incident this year involving SUKE.

On March 3, a portion of a bridge under construction fell after it was hit by a trailer carrying heavy machinery, trapping five people in a factory van travelling on the MRR2 Highway near Bandar Tasik Selatan.

Projek Lintasan Sungai Besi-Ulu Klang Sdn Bhd confirmed, after that incident, that the trailer that impacted scaffolding belonging to the SUKE construction site was a private vehicle and was not involved in or affiliated with the construction of the highway in any way.

An investigative team has been ordered to conduct a comprehensive probe into the latest incident, said Deputy Human Resources Minister Datuk Awang Hashim.

He said the FT and Putrajaya DOSH had issued a stop-work order at the project site, for the team to conduct its investigation.

“According to the Occupational Safety and Health Act 1994, it is the duty of the employer to protect the safety, health and welfare of each of their staff while on duty, as well as the public, at the workplace under their control, ” he said.

Awang said employers had full control over all activities at their work site, and that included conducting an effective risk analysis before allowing any of their employees to start work.

“This is to reduce risks and avoid any untoward incidents.

“The Occupational Safety And Health In Construction Industry (Management) 2017 also requires every party, including clients, designers and contractors, to act responsibly at work sites, from the design stage of the project, ” he said.

A SUKE representative confirmed the incident, saying: “The incident may have occurred after one of the gantry crane components fell during maintenance work. The exact cause is still under investigation.” 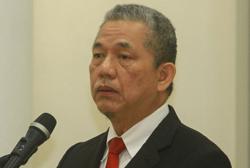