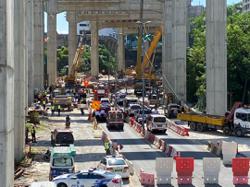 KUALA LUMPUR: Three foreign workers have died and one road user has been injured after a construction crane fell along the Sungai Besi-Ulu Kelang Elevated Expressway (SUKE).

The cause of the incident is still under investigation.

“The SUKE Emergency Response Team and the Fire and Rescue Department has closed traffic there and rescue efforts are still ongoing, ” said a SUKE representative in a statement on Monday (March 22).

It was understood earlier that two construction workers were killed while another two were believed to be seriously injured after a crane fell on top of a car at a construction site of a highway at Puncak Banyan, Persiaran Alam Damai here.

The driver of the car - a Malaysian - was severely injured while two construction workers fell 120 feet from the construction site and died at the scene.

A Kuala Lumpur Fire and Rescue Department spokesperson said that firemen are currently rescuing another worker trapped at the site.

"We received a call on the incident at 8.45am and 25 firemen from Cheras, Tun Razak and Hang Tuah were deployed to the scene," he said in a statement.