Projek Lintasan Sungai Besi-Ulu Klang Sdn. Bhd said this was done to facilitate efforts to rescue the victims in the incident.

It added that a SUKE emergency response team, as well as Fire and Rescue Department personnel, have shut the traffic flow in both directions at Puncak Banyan, Persiaran Alam Damai as the rescue work is still being carried out

“The preliminary investigation shows that three construction workers, who are Chinese nationals, have died and one road user has been injured in the incident," it added in a statement.

“It was understood that the incident took place after one of the components of a gantry crane fell. The cause of the incident is still under investigation," it also said.

Following the previous incident, it confirmed that the trailer that impacted scaffolding belonging to the SUKE construction site was a private vehicle and was not involved in or affiliated with the construction of the highway in any way. 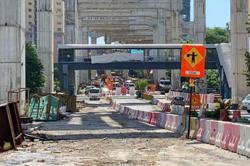