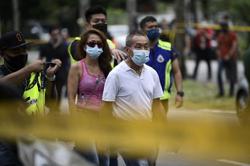 Ampang Jaya OCPD Asst Comm Mohamad Farouk Esha said both were brought to a nearby hospital after sustaining light injuries, he said when met at the crash site yesterday.

“We believe they were from Subang heading to Genting Sempah,” he said.

“They can go to the Taman Melawati police station or Ampang Jaya police headquarters,” he said.

The case is being investigated by the Transport Ministry’s Air Accident Investigation Bureau.

The road where the crash occurred will be re-opened once the debris is removed from the site.

A resident, who declined to be named, said he was trekking in the nearby forest.

“A few of us rushed to the scene and saw a blue helicopter which crashed while the red one landed at the Tamil school,” said the man, who is Mohamed Sabri’s neighbour.

“At first, I thought it was the sound of a lorry in front of the apartment,” he said.

A crowd gathered to get a glimpse of the crashed helicopters since noon.

One of them said she was out buying food when she saw the red helicopter land on the field just at the school.

Shortly after that the black one landed as well.

“It was so lucky that none of it hit the houses because it is a well populated area and it landed so close to it. I actually didn’t expect there to be any deaths,” she said.

Helicopters belong to aviation enthusiasts club based in Subang 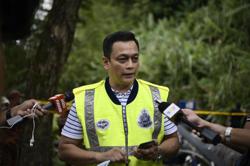