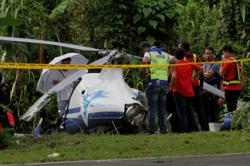 CHERAS: Mohd Irfan Fikri Mohd Rawi would send a text message to his family WhatsApp group informing them of his flight plans.

Dr Mohd Izani is used to seeing his brother’s messages, but he did not expect yesterday’s to be the last.

Irfan, 44, died in a helicopter crash in Taman Melawati after a mid-air collision with another helicopter in the area.

Another man who was with him in the aircraft was also killed. He was identified as 56-year-old Mohamed Sabri Baharom.

Izani, 48, said he received the devastating news via the same messaging platform about noon.

“At that time we did not know whether he was dead or alive, ” he said when met at Hospital Canselor Tuanku Muhriz Universiti Kebangsaan Malaysia here.

Irfan, a businessman, left behind a wife and five children.

Izani spoke of how his brother loved flying. “It had always been his passion since he was a child. No one else in the family had the same level of interest in aviation as he did.

“Irfan had invited me to fly with him but I declined as I am scared of flying, ” he said.

He said his brother had a licence to fly but was not sure how long he had trained as a helicopter pilot.

Izani, who is the eldest in the family of 10, described his brother as a nice person and had no problems with anyone.

He said the rest of his siblings were at home caring for their aged parents and the children.

It is believed that both helicopters, which are from a flying club, left the Sultan Abdul Aziz Shah airport in Subang at 11.11am.

The first helicopter crashed to the ground in Taman Melawati while the second one with Ahmad Jauhari and Tan inside crash-landed near a school in the area at 11.33am, 22 minutes into the flight. Both of them survived the crash.

Helicopters belong to aviation enthusiasts club based in Subang 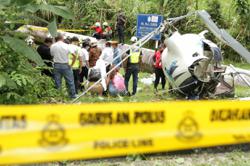 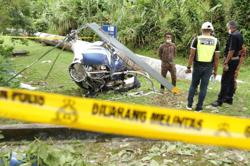