GEORGE TOWN: Even before the proposed RM100mil Penang Hill cable car project has yet to lift off after running into funding problems, another similar idea has been mooted.

Foreign investors are forming a consortium to propose the 6km cable car project to be built by China, one of the largest builders of cable cars in the world.

He said such an attraction might mean new international appeal for the Teluk Bahang and Batu Ferringhi tourism belt.

“Let’s face it. Our tourism belt is losing out to places like Bali and Phuket.

“What else are we going to sell? More horse rides on the beach and water scooter trips? We are not being fast enough. We need a new element, ” he said, adding that there “will be no theme park plan”.

Sim Leisure Group, which is publicly listed in Singapore, owns the Escape theme park in Teluk Bahang and is one of the foreign investors in the consortium.

Sim said his company had been discussing the project with the state since 2015 and was prepared to set aside a few acres of land it controls in Teluk Bahang for the lower station of the cable car line.

“The hill can thrive as an attraction without the burden of needing more infrastructure. We are against more development on the hill. We want Penang Hill to remain as a flower garden.

“Visitors can enjoy the hill and return to their hotels in Teluk Bahang and Batu Ferringhi – even at 1am or 2am – by cable car, ” he said.

The proposed cable car line will be 6km, with one middle station and about 20 pylons, while the maintenance road below will be 10km.

“The road is longer because we will have to snake around trees. Cable car lines around the world today are built while carefully preserving the forest floor.

“The footprints of pylons will be unbelievably small because we know people want the sense of riding through the air over untouched forests. That is the selling point of any cable car ride, ” he said.

Built with interlocking paving so that the 10km road will follow the shape of the terrain, Sim said the plan was to make this publicly accessible to hikers free of charge.

He said his team was aware of non-governmental organisations’ (NGOs) concerns and was prepared to be fully transparent with the construction plan.

“We are on the same page as the NGOs. We transformed a brown field in Teluk Bahang and made it green as the present-day Escape, ” he said.

Many developers have tabled lofty plans for Penang Hill in the past.

In 1990, a developer proposed a cable car for the hill, a water world, a Disneyland-type theme park, a five-star hotel, 350 condominium units, a shopping centre, “summit acropolis” and a 103ha hillside golf course.

It was shelved after a huge public outcry.

In 1992, the state government announced plans to build a cable car line to the hill from Teluk Bahang but it never left the drawing board.

The Federal Government approved the Teluk Bahang-Penang Hill cable car plan in 1999 but this was drowned by debate among the government, NGOs and Opposition lawmakers until 2009.

In 2013, the state government revived studies for a cable car line to the hill with the backing of the then Tourism and Culture Ministry.

Proposed sites for the lower station include Penang City Park, a site near Penang Botanic Gardens and Teluk Bahang.

Last year, then finance minister Lim Guan Eng approved a RM100mil allocation for a cable car from Botanic Gardens to Penang Hill but the allocation was cancelled recently.

When contacted, state Tourism Development Committee chairman Yeoh Soon Hin said the state exco was aware of the foreign investors’ proposal of the Teluk Bahang-Penang Hill cable car line and would look into it. 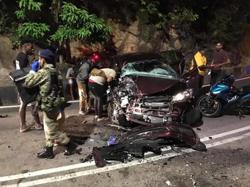