PETALING JAYA: As Malaysia moves on to the recovery movement control order (MCO) phase, it is still challenging for families with special needs children who are unable to go to school, or get the therapy they need.

Tomas and Lydia (not their real names) said they struggled to care for their 15-year-old son, who has autism spectrum disorder (ASD).

Having no therapy to turn to, they said, their teenager ended up playing games on his mobile phone while being confined at home.

The increased screen time has made their son difficult to control when the phone was taken away.

"Sometimes, he screams for as long as an hour," said Tomas.

The couple, both engineers in their late 30s, are devastated and said their son needed his therapist.

With no support, another father, Frank (not his real name), said he often felt helpless caring for his son.

He said Michael, who also has ASD, often had terrible meltdowns.

"Once, I made the mistake of changing the channel while he was watching his favourite programme, and he started running up and down the house screaming," he said.

Frank added that when he did not relent, Michael ended up on the floor and started hitting his head.

Being the only parent who is involved in taking care of the child, the 40-year-old father is also hoping for his son's school to reopen soon.

Ruth S. Arunasalam, who, for almost two decades, has been researching and helping people communicate with children with autism, said the MCO left parents without access to therapies and support.

"Children are being kept at home and taken out of their routines, which are important for those with autism.

“This spurred many challenges on two sides of the pendulum; not only for the child, but also the parents, ” she said in an interview.

Ruth added that she had been getting calls for help from parents daily since the MCO started, and even until now.

She said parents needed the right understanding and approach to cope with a child with autism.

“What works for child A may not work for child B. Parents must understand that most of the behaviour is not within the child’s control, so they should refrain from using words or actions that can worsen the situation.

“They need to come up with a plan at home to accommodate the child’s needs by coming down to his level, so that he would not feel the break from their routine, ” she said.

As for high-functioning children, she said parents could come up with a question-and-answer session to make the child understand the situation.

“If parents are empowered with the necessary awareness and action plan, both children and parents will go through the Covid-19 pandemic and still maintain a good quality of life, ” she added.

Senior consultant paediatrician Datuk Dr Amar Singh HSS also said it was important for parents to create new routines for their children at home during the MCO.

“Some children are more vocal and some less. Parents need to engage them by asking what is their preference for new routines at home.

“Secondly, there must be a game plan when there’s a meltdown, especially in preventing the child from hurting himself, ” he said, adding that a learning corner could be created to support a child to continue learning at home.

National Autism Society of Malaysia (Nasom) chairman Feilina Feisol said it took her two weeks to make her 23-year-old son with autism understand there was no school, no outings and no eating out.

“I had to set up a routine for him, ” she said, adding that parents needed to plan with the teachers and therapists.

On a related matter, she said NGOs advocating autism awareness like Nasom had been facing challenges to stay afloat during this difficult time, as one of its centres had to shutter permanently.

“Some parents could not afford to pay the fee, even though it is the lowest in the industry, between RM500 and RM700 a month.

“We allow parents who are from the B40 group or who were laid off to pay half or less. That was a deficit of RM30,000 a month, ” she said, adding that Nasom had 16 centres with 550 children and young adults nationwide, with 287 teachers and staff.

Dr Amar concurred, adding that some centres for early intervention, autism and other disabilities were going down because they could not sustain during the MCO and beyond, as people were less likely to donate due to financial concerns.

“The community and government need to support these centres and give them a lifeline. They are important to help the special children, ” he added. 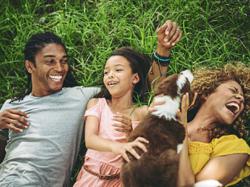 Pets help kids with autism and their parents