PETALING JAYA: Former PKR lawmakers aligned to Datuk Seri Azmin Ali have denied accusations that they are traitors to the party and the Pakatan Harapan government.

The group of 11 MPs instead labelled those who tried to oust Tun Dr Mahathir Mohamad as the "real traitors".

"This is because they prioritised their agenda to remove the prime minister instead of focusing on the implementation of government policies in a bid to improve the economy and to protect the well-being of the people," the group said in a statement late Monday (Feb 24) night.

The statement was issued after the group gathered for a meeting at a five-star hotel here.

The group had announced earlier that, "We, the MPs of PKR, announce our decision to leave PKR and the Pakatan coalition to form an independent bloc in Parliament," they said in a statement issued at 2.15pm Monday.

The group also noted that there were clear efforts during the last Pakatan presidential meeting on Friday (Feb 21) to remove Dr Mahathir out of office by forcing him to give an exact date to hand over power to PKR president Datuk Seri Anwar Ibrahim.

"The campaign, which began since a few months back, became more aggressive in order to shift the public's attention from the efforts of improving the economy and institutional reforms.

"We are confident that the attempts to force the prime minister to give an exact date on the transition plan is an evil plan to make Dr Mahathir a 'lame duck prime minister'," the group added.

It said that the attempts to change the prime minister in the middle of the term will give a bad impression to the people and investors.

"Therefore, we have taken a proactive action to stop the conspiracy to remove the prime minister in the middle of the term," it said.

According to a source who declined to be identified, he asked the media to wait for a "big surprise" on Tuesday (25 Feb).

Earlier Dr Mahathir, who had announced his resignation was summoned to Istana Negara.

The Yang di-Pertuan Agong accepted Dr Mahathir's resignation and has consented for him to continue running the country as interim Prime Minister while waiting for a new premier to be appointed and a new Cabinet to be formed. 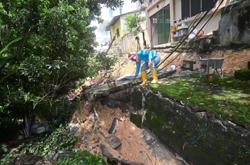