Staff members and students from Universiti Tunku Abdul Rahman and Aichi Gakuin University learning from each other in the virtual study tour.

The event, themed “Unmasking Japanese Culture”, saw students from Aichi Gakuin University (AGU) sharing their views on two topics — “The Half” and “Acculturation of Foreign Food in Japan”.

The former covered challenges faced by children of mixed marriages, while the latter touched on the preparation, presentation and consumption of food influenced by native cultures.

During the event, AGU students shared that athletes and celebrities such as Naomi Osaka, Ariana Miyamoto and Rui Hachimura, who are of mixed parentage, were perceived negatively and their achievements were largely disregarded because of their mixed identities.

The students also noted that they hoped to emulate Malaysia’s multicultural society, whereby people, regardless of ethnicity or background, were widely accepted.

On the second topic, AGU students shared how various native foods from other countries were introduced in Japan and later prepared, adjusted and served to suit the local culture.

The event saw the participation of 269 staff members and students from UTAR and AGU.

The event was also held as part of an effort to maintain a long-term partnership between the two institutions.

“I have never been to Japan so when I saw the announcement about this programme, I was intrigued.

“It was a great opportunity to interact with the Japanese students virtually and exchange our travelling experiences.

“I really hope that I will be able to join the study tour to Japan when the pandemic is over,” he said.

“Although it was held virtually, it was done well.

“There was a lot of interaction between AGU and UTAR students in terms of exchanging views, thought-provoking questions and opinions, and even laughs.

“I am glad that I participated in this virtual study tour.

“Getting to know a little more about the city of Nagoya, the Japanese culture and, of course, the AGU students has inspired me to visit AGU and the city someday,” she added.

“It was a rare opportunity for my students to speak in English online to about 250 people.

“They were nervous in the beginning, but they seemed to enjoy their presentations later.

“I hope we can organise this event again,” she said. 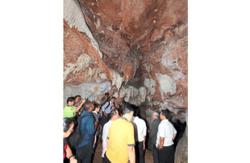