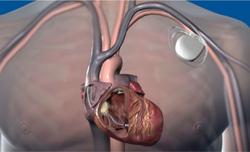 Ong (left) showing an automated external defibrillator installed at the P84 rest area on Penang Hill before the full lockdown.

THE P84 team of hikers on Penang Hill hopes the state can help set up an emergency response team to go to the aid of hikers who suffer from sudden cardiac arrests (SCA) while exercising on the hill.

P84 committee chairman Datuk Jimmy Ong said the hikers themselves were trying to come up with an aid team for fellow hikers and cyclists.

“It will be good for everyone on this team to learn cardio-pulmonary resuscitation (CPR).

“When people collapse due to SCA, CPR is the most immediate thing to do.

“If everyone knows CPR and can perform it, they can at least keep the victim alive while waiting for an AED (automated external defibrillator) or rescue team to arrive.”

Ong was speaking at the hand-over of AED devices to P84 and P39 Penang Hill committee teams on the hill.

The event was held before the full movement control order 3.0 and lockdown came into force.

He urged the public to be mindful of the intensity of exercises they do. Jagdeep says the state will look into the hikers’ request to have an emergency response team on the hill.

“Some can hike for two to four hours at one time. They may think they are fit.

“But once cardiac arrest comes, the response time is very short so it all comes down to how quickly the surrounding people react to the situation.”

The AEDs will be placed at strategic spots on Penang Hill.

AEDs, there were now 70 publicly accessible AED devices in Penang. Lions Club of George Town members and hikers planting trees at the P84 rest area before the lockdown.

“We will make sure there are more such devices at strategic spots, ” he added.

He assured the P84 committee team that they would look into having an emergency response team on duty on Penang Hill.

“Throughout the state, we already have emergency response teams but perhaps we need one based on the hill too, ” he said.

SCA is a condition in which the heart suddenly stops beating. Breathing also stops and the victim loses consciousness.

Last July, The Star published an exclusive report detailing how four people died of SCA in Penang within three weeks.

This was shortly after the first MCO was relaxed, allowing people to take part in sports activities again after being cooped up at home for almost three months. 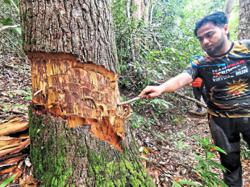