The Agriculture and Food Industries Ministry has come up with a programme to help fishermen in the B40 group generate more income.

“The fishermen will be involved in planting cash crops such as chillies, ladies’ fingers, sugarcane, banana, ginger and turmeric, which can be harvested within six months after they are planted.

“If successful, they can gain an additional income of RM250 per month, ” she said.

She added that the fishermen would be divided into groups of 10 and there were nine area fishermen’s associations in the state.

“Participants will be given RM1,000 worth of seeds, fertilisers, tools, equipment and pesticide, ” Intan Suhaila said, adding that each group would have 8sq ft of plantation area, which would be expanded if successful.

Each area will plant a different type of crop and planting is expected to start next month.

For example, Gelang Patah will grow chillies while bananas will be planted in Kukup. Kampung Pasir Gudang Baru in Johor Baru will focus on sugarcane.

There are also three types of fertigation that the participants could choose from, namely group fertigation, mini fertigation and individual fertigation.

“Aside from providing them with the basic equipment and tools, they will also be given technical training, ” she said, adding that the Johor Agricultural Department would also be involved in the project.

She said LKIM was currently in the final phase of distributing all the equipment and tools.

The distribution process, which began last October, is expected to be completed next month.

“We hope those who have chosen to take part in this project will do their best to produce high-quality products that are marketable so that they would have another source of income aside from going out to the sea, ” she added. 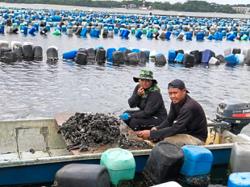