Who will save Asia's hotels with Covid-19 on the rampage?

In Malaysia, some big chain hotels have been slashing their room rates and coming up with two-for-one buys since the start of the conditional movement control order. — ART CHEN/The Star

With Covid-19 on the rampage and ever more sly as travellers await an elusive silver bullet vaccine, Asia is on sale. In a trend that began early 2020, over-leveraged independents and smaller hotel groups are racing to offload debt as hungry property funds with groaning war chests sniff around for rock-bottom deals.

The wholesale offloading of property in a hugely depressed market has sent prices crashing as no one has a magic post-Covid looking glass – or a suitable algorithm – to predict travel habits once the current plague is passed.

This has created an odd situation. Larger international hotel chains are sitting on rapidly depreciating assets sans cash flow (many renegotiating management fees downwards by 50% or more in some cases) and those that own their hardware still need to service existing debt at usurious rates. There are no debt write-offs in sight.

Now is the time to dip into a secret ingredient that has been forgotten or disregarded. It’s called experience. Remember that? Intuition. Instinct. Gut. None of these words fit into any comforting ROI (return on investment) or RevPAR – revenue per available room, in hotel speak – formula. These lifesaver skills, that the industry once prized and paid handsomely for, have atrophied over the past decade.

Instead of searching their memory bank for solutions, hoteliers beholden to financiers are trying to project trends and numbers that offer solace to accountants but rarely reflect the real world outside.

To pull a rabbit out of a hat, experience is a sound prescription. Not an algorithm. 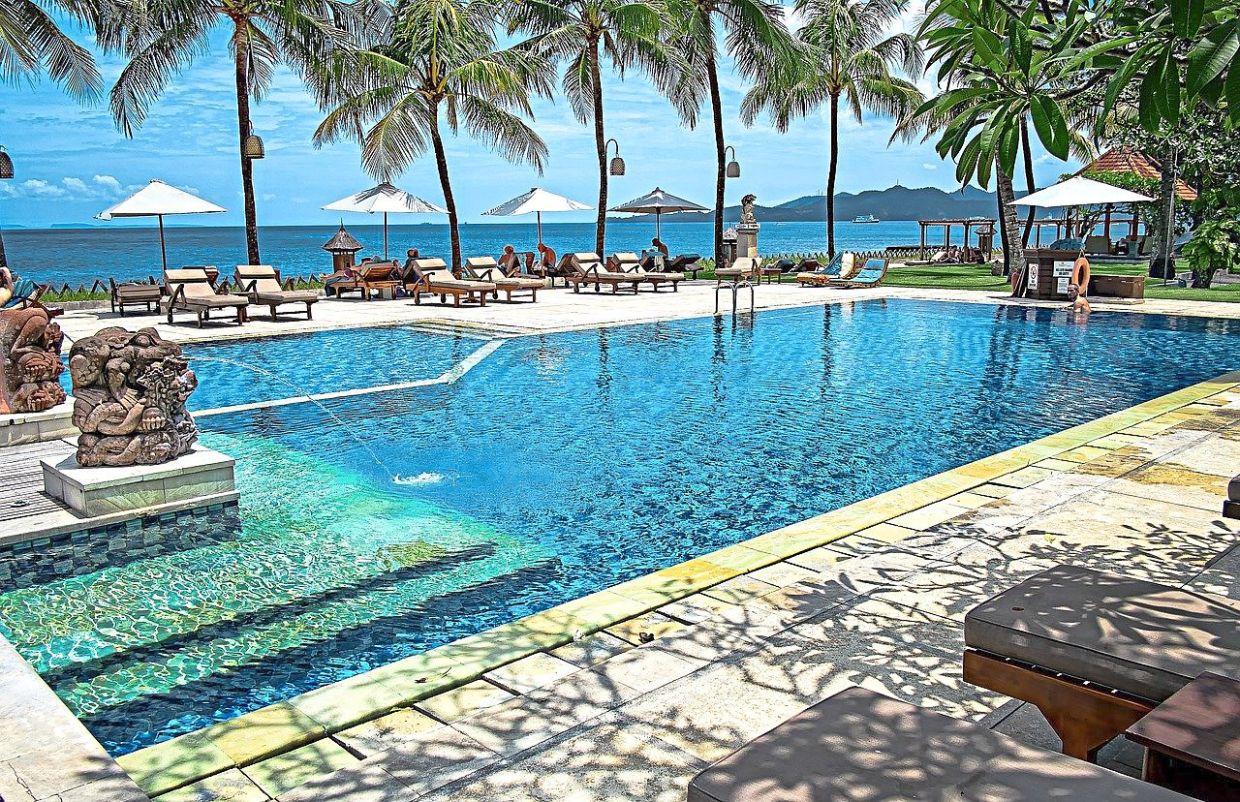 Many hotels around the world are looking forward to the return of Chinese travellers who used to make up a big chunk of the annual number of international travellers. — Pixabay

Clearly these are not sustainable figures despite the cushioning provided by domestic tourism. To make matters worse, in several regions, travel was in flux well before Covid-19.

Small wonder then that some management companies are backing out of new or in-the-pipeline mega-projects. The “for-sale” signs are everywhere. Shangri-La’s long awaited Nusa Dua, Bali (Indonesia) foray remains up in the air – in danger of becoming yet another shaggy-dog story – though Raffles Bali bravely went ahead with its soft launch in July. Meanwhile, the Andaz Bali has announced operations by December or early 2021.

Another casualty of the “big Chinese Covid-19 no-show”, the marble-slathered Mulia Bali on the Nusa strip, is up for sale.

Marriott’s cloud-piercing Edition Bangkok bit the dust two years ago to make way for Accor’s reticent and yet-to-open Orient Express MahaNakhon. Yet others are motoring on for a late 2020 or early 2021 launch. Watch for the 46-key Azerai Ke Ga Bay (Vietnam), Banyan Tree Krabi at Tubkaek Beach (Thailand), and the Chedi Kudavillingili (Maldives).

The much-anticipated Sindhorn Kempinski Bangkok was “partially” opened on Aug 1 with the neighbouring Kimpton Maa-Lai Bangkok due in October along with the riverside Capella Bangkok. The bedsheet thread count has gone up while the head count has gone down thus raising the financial threat count.

Unsurprisingly, Thailand’s hard-hit hotels particularly in Phuket and Samui are up for grabs (at rates as low as US$15mil/RM62.1mil to US$30mil/RM124.3mil) or changing hands. Property funds have made a beeline for Thailand while rich pickings are available from the Philippines to Indonesia.

According to Preqin Ltd that specialises in data analytics for alternative assets, private equity firms could have up to US$328bil (RM1.63tril) globally for property snatches. Major investors from China (Fosun group), Hong Kong (Li Ka-shing’s Cheung Kong) and Singapore have been on the lookout for deals, hampered only by the reluctance of some governments to let in foreign buyers.

With bulk “wholesale” travel in disarray (this accounts for a large portion of hotel leisure traffic), online travel agents (OTAs) have been hyperactive as the few travellers braving aircraft filtration systems, Covid-19-free certificates, and random sneezes are out shopping for deals rather than heading to safe harbour through loyalty programmes.

On search, having outspent hotels (which have slashed marketing budgets), OTAs are better positioned to drive traffic. Well-heeled travellers will return seeking the safety of professional and consistent travel protocols at luxury chains and spread out private island resorts, but this is further down the line. For now the deals are on for travellers with the moxie and a dash of cash.

It is time for recalibration. Property distress sales can offer opportunities for lower re-entry operating costs and better rates that are more in line with traveller expectations. Looking at current operation and investment costs, sensible returns on several mega-projects are simply unattainable. Larger hotel groups are understandably looking at “greater efficiencies and leverage on technology” – Accor hopes to reduce 200 million euros (RM992) of recurring costs.

Other hotels are seeking soft loans and assistance. In an article in TTR magazine, Thai Hotel Association president, Marisa Sukosol Nunbhakdi, was quoted as saying that “Banks need to be more lenient with soft-loan financing”. Thailand hoteliers would welcome government funds as the country explores “bubble tours” with visitors to, say, Phuket, transferred privately and securely for a 14-day quarantine after which they’d be free to move around on a 30-day holiday with regular health checks and surveillance.

It will be a slow climb back. In India, a panel put together by the Institute of Risk Management determined that 75% of normal pre-pandemic travel could return by next summer, much of this driven initially by the domestic forays of younger adventurers. The Indian Civil Aviation Minister Hardeep Singh Puri taking a more sanguine view, declared late August that the country’s domestic travel numbers would be back by Nov 14 in time for Deepavali. In August, domestic numbers were 33% of the normal trend line.

India, Thailand, Indonesia and China have a robust domestic travel market that could spark a turnaround and much interest has focused on this audience, unfettered by visas and quarantines.

But for many hotels around the world there is just a single panacea for their Covid-19 woes – the return of Chinese travellers who hitherto made up 12.5% (or one in eight) of all international travellers. These visitors, and many others, will likely be preoccupied with privacy and low-density destinations rather than the usual tourist bucket list. The graduation of the discriminating Chinese traveller (from the group tourist heap) would be welcome news anywhere.

But for a stable future, diversity will have to be sought and re-imagined. Gone are the days when hotels chased prized Japanese wallets, even setting up dedicated tatami rooms with futons. When the Japanese dwindled, these rooms became a hindrance.

Others focused on women. The Lee Garden Hotel in Hong Kong famously blocked off several floors for ladies, later rolling things back with “women’s clusters” (or a few rooms together per floor), eventually bowing out in a spectacular Cluster’s Last Stand with the hotel demolished to make way for an office tower.

Hotel general managers in Asia who took pride in catering purely for, say, high-spending Germans (“No Asians here...”) walked a very doubtful fine line between revenue and racism. Then the Chinese arrived to save travel. Will they do so again?

Vijay Verghese is a Hongkong-based journalist, columnist and the editor of AsianConversations.com and SmartTravelAsia.com. The views expressed are entirely the writer’s own.

Langkawi targets tourism growth in Q4
What�does it take to restart tourism in Malaysia and all over the world?
Malaysians need to reconsider the way they pack for a post-pandemic holiday Premium
Tokyo Olympics 2020: Japanese Games mascots are too 'kawaii' to handle Premium
Preserving trams, a popular heritage in Lisbon
Malaysian experiences a special Onam festival in Kerala before pandemic
Malaysians unite over 'craziest' travel experiences on Twitter
Malaysian travellers expect travel sector to get better over the next 12 months
Prioritise safety for women travellers, says Tourism Minister
Cartoons come alive in Hong Kong for Pixar's 35th anniversary