Muhammad Dain Othman commands the show behind the scenes during a wayang kulit performance. Photos: THE STAR/Chester Chin

The sound of a lonesome serunai pierces the night air at the small town of Wakaf Bharu in Kelantan. That singular note is then joined by the canang, gendang, rebab and a variety of other traditional instruments to form a rousing nostalgia-laced melody.

Suddenly, a trio of shadows with intricate designs dances against the white screen in front of us. Soon, a man’s raspy voice glides over the music, narrating tales of epic proportions.

The storyline seems terribly fascinating... if only I could actually understand the sing-song Kelantanese dialect that the man is singing in.

But behind the screen is where the real story unfolds. Wayang kulit continues to be a strong tourism draw in Kelantan.

Here is where Muhammad Dain Othman commands the show; projecting his voice with seasoned confidence to the audience on the other side of the screen. All the while, he deftly manipulates the movement of beautiful leather puppets with unmistakably trained gestures.

The 68-year-old man, better known as Pak Dain, is one of the few remaining wayang kulit Tok Dalang (master puppeteer) in Malaysia.

He is the 13th, and the only person currently, who has received accreditation in the traditional Kelantan Malay wayang kulit.

And tonight, he’s pulling out all the stops to showcase his craft to a group of journalists and travel writers from Kuala Lumpur in a bid to save the dying art. Muhammad Dain Othman commands the show behind the scenes during a wayang kulit performance.

Although it continues to be a tourism draw to Kelantan, wayang kulit has stood on shaky grounds for many years in the relatively conservative state.

With its strong Javanese and Hindu influences, the traditional shadow puppet play is regarded as opposing the values and teachings of Islam. In other words, wayang kulit is deemed haram – forbidden or proscribed by Islamic law.

“Here’s the thing, I don’t blame some clerics who label wayang kulit as haram, ” Pak Dain says carefully adding: “There are some rituals associated with wayang kulit, that even I personally feel isn’t right.” 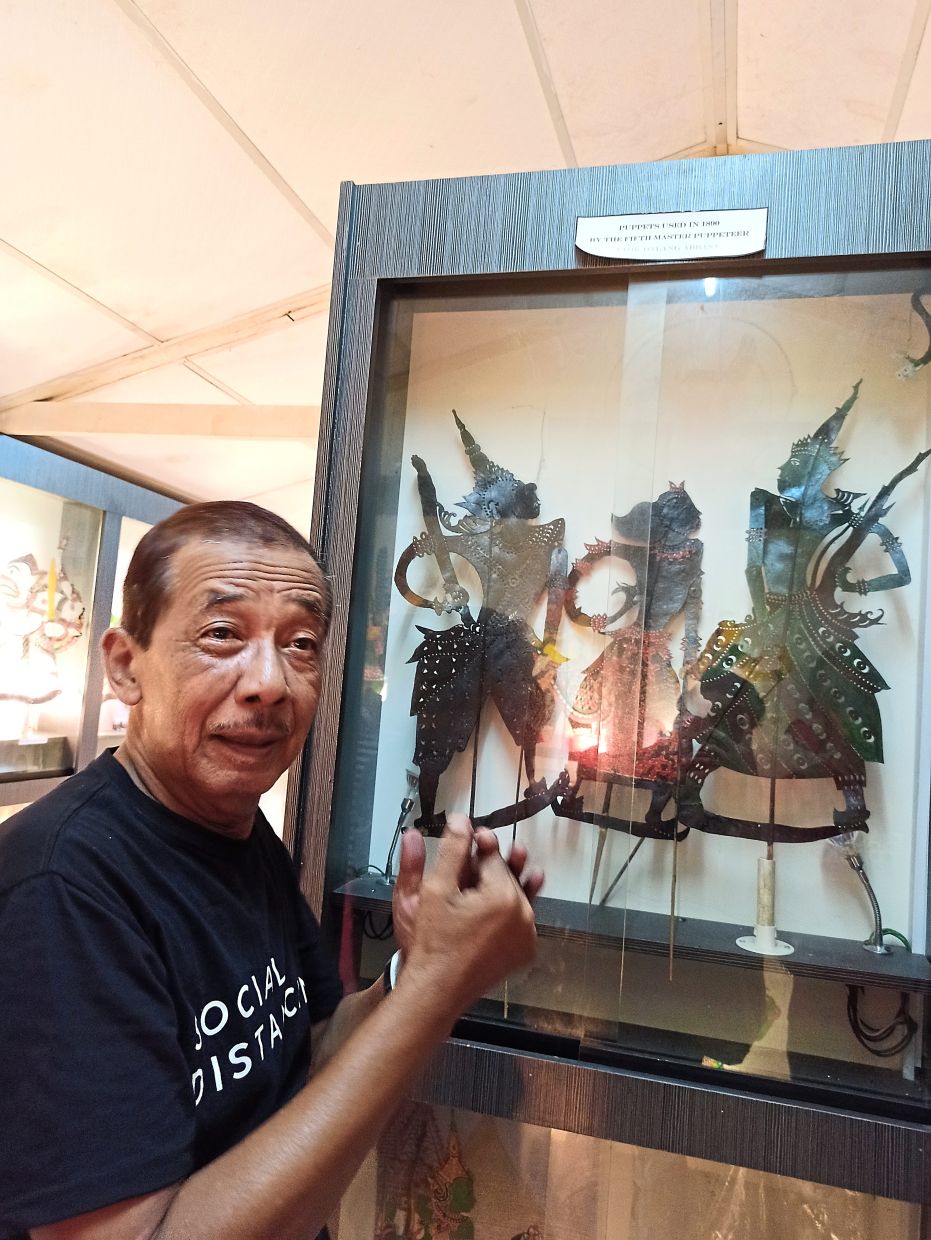 Pak Dain is one of the few remaining Tok Dalang in Malaysia.

In the past, some semblance of ritual significance – with incantations and offerings – is tagged onto wayang kulit. However, these practices have long been scrapped to adapt with societal values here in Malaysia.

“The problem is that the perception remains. Although we do not incorporate ritualistic elements any more, society still holds on to the belief that the play is haram, ” Pak Dain says when met at Galeri Wayang Kulit Tradisional Melayu Kelantan recently.

He adds that a general lack of interest from society is also threatening the existence and relevance of the shadow-puppet play.

“Wayang kulit is an art form that is no longer appreciated by the old as well as the new generation.

“For the old timers who have stepped into the realm of religion, wayang kulit is something that is frowned upon, ” he says. 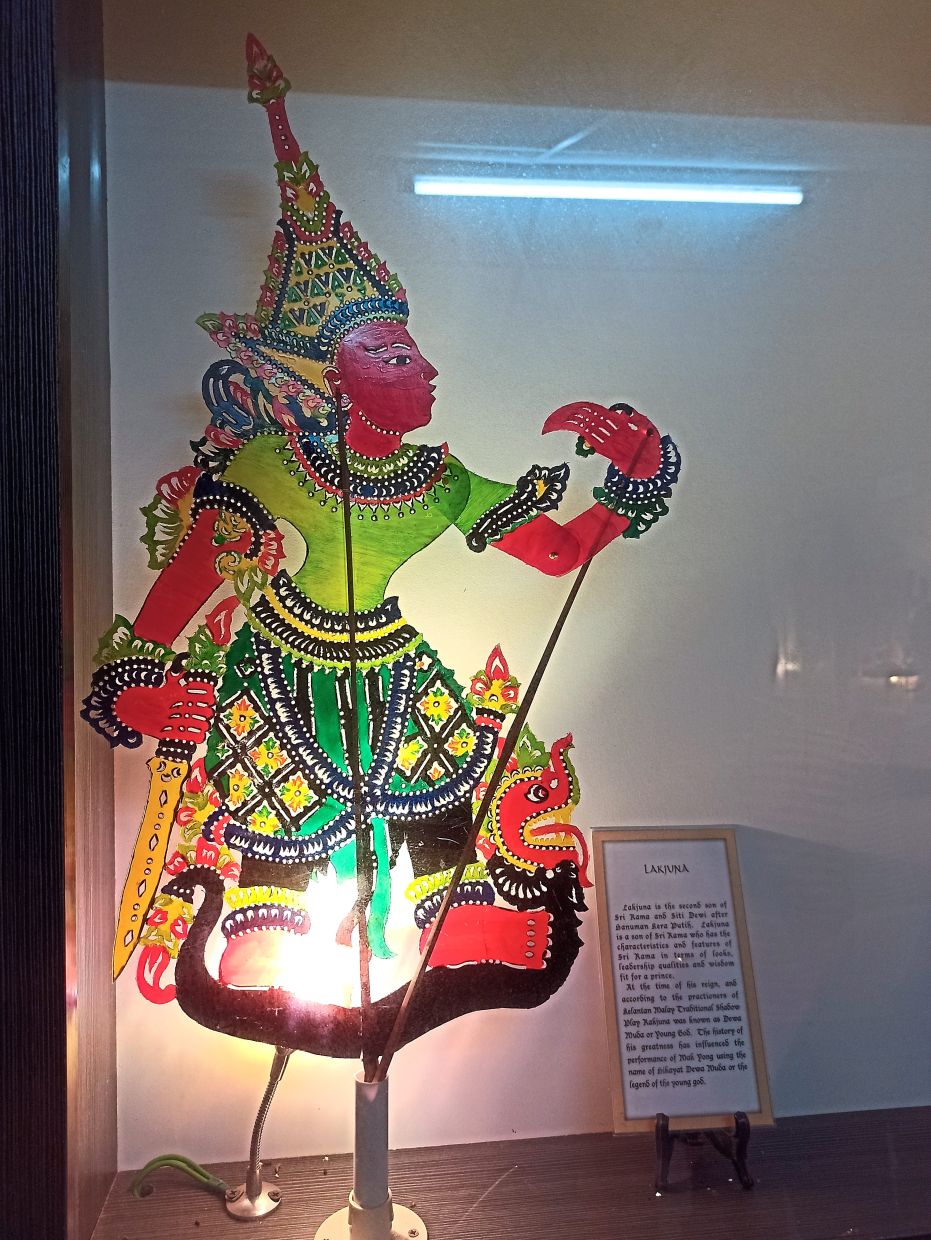 A puppet on display at the gallery.The youths meanwhile are simply preoccupied by other new and shinier forms of entertainment.

“Due to these reasons, the art of wayang kulit has been on the decline over the years. Practitioners are also not inspired to stay active as there is simply not that much demand (for performances), ” Pak Dain shares.

Under the law, shadow play is only permitted in closed venues.

Despite all the controversy surrounding wayang kulit in the state, Kelantan is still considered to be the heartland of the art form.

There are many differing opinions about the origins of shadow puppet play, but what’s certain is the usual staging of epics such as Mahabharata and Ramayana.

To keep up with local sensibilities, practitioners here stage Hikayat Sri Rama instead, which is the Malay adaptation of Ramayana. Sometimes, secular tales and humorous analogies are also weaved in with local folklore.

Much of this backstory can be traced at Galeri Wayang Kulit Tradisional Melayu Kelantan which Pak Dain founded in 2008.

“I don’t want the art of wayang kulit to go extinct. That’s why I decided to spent hundreds of thousands of my own money to build and fund this gallery.

“To me, this place helps ensure the continuity of wayang kulit. In the event that there are no more Tok Dalang in the future, at least people can still learn about wayang kulit at my gallery, ” he says. 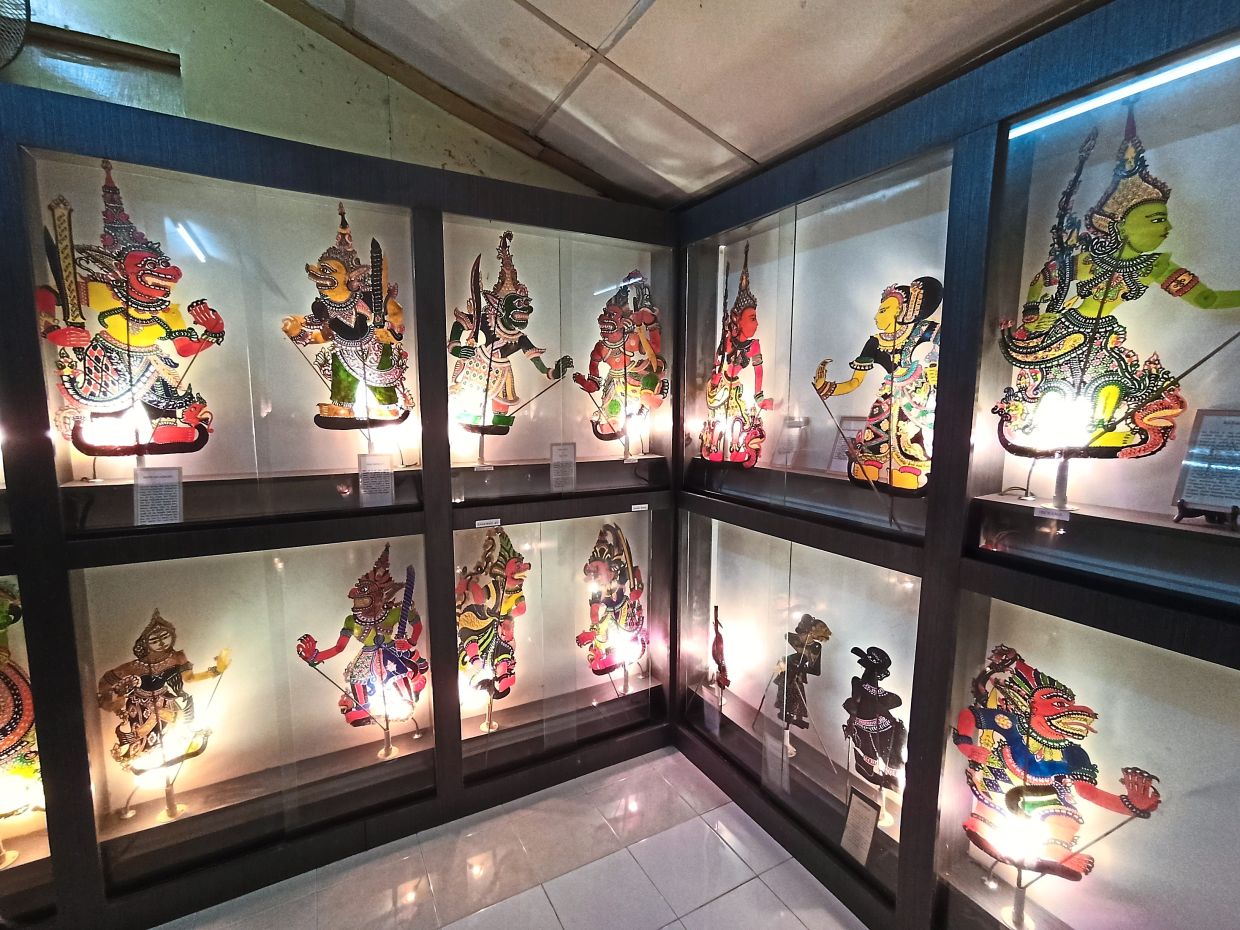 The backstory of wayang kulit can be traced at Galeri Wayang Kulit Tradisional Melayu Kelantan.

Since its inception, the gallery has been a regular fixture on Kelantan’s tourism map. Pak Dain says response from visitors have been encouraging over the years, with many who are genuinely curious about wayang kulit.

It helps that tourism boards and private travel companies help to drive tourists’ eyeballs to the venue.

The pressing issue now would be to look for a worthy successor. Pak Dain’s search for the next Tok Dalang is still an ongoing battle, with no foreseeable respite.

Pak Dain received his accreditation from a previous Tok Dalang back in 1982. To date, there hasn’t been another person deemed worthy to be accredited as a master puppeteer.

“There are some experienced practitioners out there, but none of them have received accreditation, ” says Pak Dain, who likens the process to a graduation.

To be an accredited master puppeteer involves years of training under the tutelage of another Tok Dalang. Students of wayang kulit are required to memorise the names of characters by heart and be able to shift their voices to go with a particular characters’ qualities.

“These groups of people will judge whether you are fit to be a master puppeteer, ” says Pak Dain. Pak Dain was part of the Peperangan Bintang project in 2012, a wayang kulit staging of Star Wars. Photo: Filepic

Over the years, Pak Dain has trained several students. However, only a few of them have remained active in the scene, becoming musicians and puppet crafters.

“Some of the younger ones stopped their lessons when they had to further their studies, ” he shares, adding that many of the students are school leavers who are awaiting their Sijil Pelajaran Malaysia (SPM) results.

But Pak Dain isn’t giving up hope on the future of wayang kulit just yet. In the past, he had even staged a Star Wars version of wayang kulit to appeal to the modern crowd.

“I’m willing to do whatever it takes to keep wayang kulit alive. It’s a tough battle, but I’m willing to make the sacrifice, ” he says as a stray moth flies around the lantern onstage, casting errant shadows on the blank screen.

Germany’s Dresden is one of the hottest destinations to travel to in 2023
Here's a basic safety checklist for folks who prefer to fly private
Airbnb is making it easier for people get started as hosts
Taiwan's largest airline company will bring in bigger aircraft to meet demand
Siem Reap reinvents itself to attract more high-value tourists
Quaint English villages and towns to visit outside of London
Malaysia lagging behind neighbour countries in terms of full tourism recovery
10 must-visit museums in Malaysia to learn about our culture and heritage
Will half a million free tickets save Hong Kong from tunnel vision?
What to do in Qatar, as the 2022 FIFA World Cup opens today