A sanctuary of tranquility 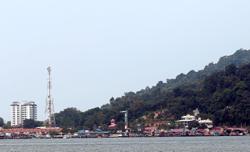 Sun, sand and sea: The beautiful beaches in and around Pangkor provide a welcome escape from the hectic pace of the city.

Pulau Pangkor stands out for a myriad of reasons – its abundant nature, its attractions, its food, as well as the hardy resilient yet friendly nature and culture of its people.

This is not to mention the island’s significant role in the country’s history, not only as the namesake of the Pangkor Treaty 1874 but also for the period before that, the remnants of which you can still see today through the 17th-century Dutch fort and the Batu Bersurat in Kampung Teluk Gedung.

And now, as Malaysians welcome the new year with Visit Malaysia 2020, the island ushers in its duty free status that visitors can benefit from.

As the federal government has already gazetted the order – although the fine print is being finalised – you will be able to purchase a prescribed volume of cigarettes and alcohol, aside from consumption on the island, which is not subject to the prescribed quantities.

Located between two of the country’s busiest city centres, Penang and Kuala Lumpur, the island is a breath of fresh air for urban dwellers thanks to its forests, said to number among the oldest and most biodiverse tropical rainforests in the world. 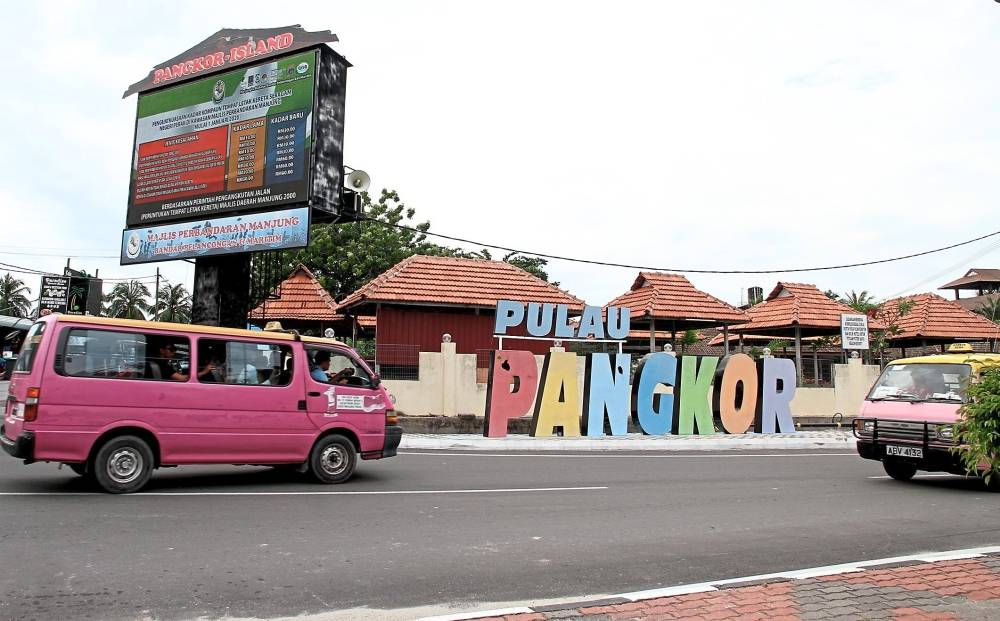 Plan a trip: Pangkor’s duty free status has commenced, making it an ideal time to visit.

Locally known as balau putih, the rare timber species only exists at several other locations in the world, which are all within Perak’s borders.

In terms of the island’s fauna, one special experience that marine enthusiasts will welcome is the chance to visit the turtle hatchery in Teluk Ketapang to observe baby turtles before they are released into the ocean, especially when the only other turtle hatchery on the west coast is the Segari Turtle Sanctuary in Lumut.

The island is surrounded by smaller islands including Pangkor Laut, Pulau Mentagor and Pulau Giam, meaning that there’s a lot on offer when it comes to sea-based activities. Snorkelling and diving, jet skiing, banana boating, island hopping – you name it, Pangkor has it.

One of the most fascinating activities visitors can experience only on Pangkor is walking on water. If you visit at the right time – typically around the upcoming Chinese New Year period – you can take a walk on the seabed from Teluk Nipah to Pulau Giam

This annual low tide phenomenon, something that tourists are generally unaware of, sees the sea level dropping to a low enough point that a watery path emerges. You can then walk across a short half-a-kilometer stroll to see the corals and aquatic life from a different perspective.

Perhaps best of all is the fact that Pangkor is easily accessible from Kuala Lumpur, Penang and even Ipoh, to name a few key cities. With the opening of the West Coast Expressway reaching full completion in 2020, it will be easier than ever to reach its shores.

Travellers from Kuala Lumpur, for instance, will be able to reach Lumut – the gateway to Pangkor – in approximately one-and-a-half hours, as compared to the current three hours.

Rail and air connectivity have been improved as well, as part of significant infrastructural developments cutting travel times and easing access into the area.

On the island itself too, everything is within close proximity. While it is a tiny 8km2 island off the western coast of Peninsula Malaysia, there is much to see and experience, even with a leisurely two-hour cruise along the picturesque road that borders the island’s coastline.

During the journey, catch a glimpse of the indigenous greenery that are part of Pangkor’s three virgin jungle reserves, alongside stretches of the beautiful sandy white beaches of Teluk Dalam, Teluk Gedung and Teluk Nipah, speaking volumes about the abundant nature that the island is blessed with.

Naturally, the island is famous for its seafood, so be sure to give the local fare at Restoran Pasir Bogak a try, especially the specialty fried satay fish.

Not to be confused with the dried seafood snacks Pangkor is also known for, the dish is the islanders’ twist on the assam fish recipe, with the fish deep fried and then cooked with satay sauce and onions among other ingredients, resulting in a tangy and flavourful sauce.

Another solid recommendation would be the sizzling hot plate prawns generously seasoned with a sauce made of onions, lemongrass, lime, chilli and other spices. 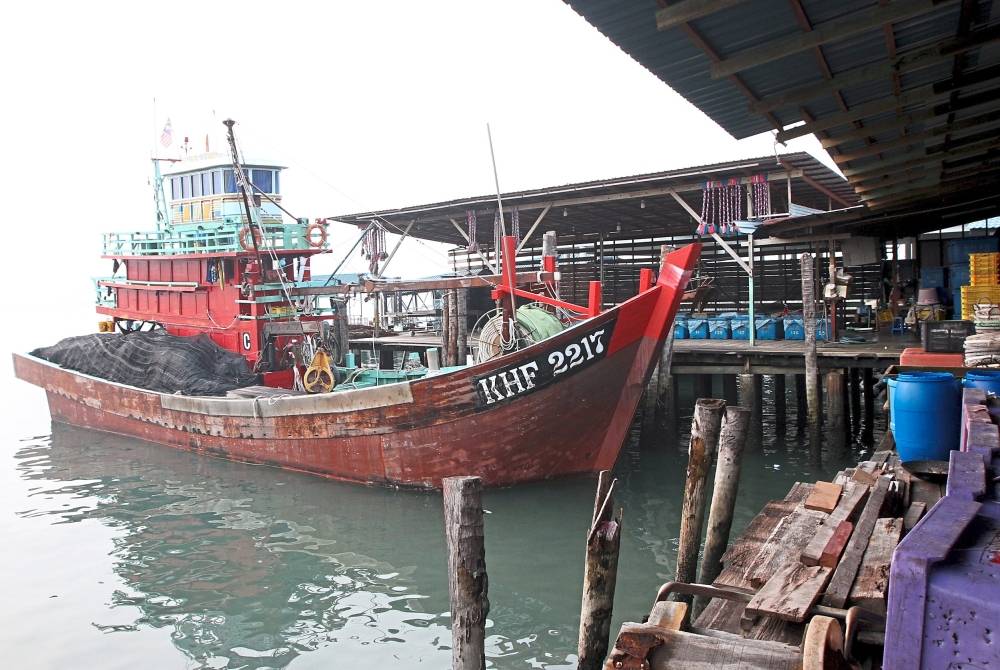 Island living: Catch an insight into the islanders’ daily lives as you explore Pangkor, especially as you walk through alleyways to discover new sights and sounds.

A Blend Of Nostalgia

Time moves differently on the small island, and the best way to see it is to visit the quaint fishing village of Sungai Pinang Kecil.

Its numerous alleyways retain its nostalgic charm, with traditional structures peeking out between newer buildings and the pace of progress on the island, in preparation for its duty free status commencement.

There is much to uncover along the way as you get to see a brief snapshot into the islanders’ daily lives, be it areas where fishermen dock their boats to sell their catch or mend the nets necessary for their livelihoods, or locals prepare snacks and meals for sale to passersby.

Open your eyes to the interesting array of options available at the old schools eateries and kopitiams that line the streets.

The most famous of his offerings is the 'Four Heavenly Kings', featuring several distinct layers of tea, Horlicks, Milo and finally coffee at the top. Quickly drink from the bottom up using a straw, savouring the sweetness of the tea, which brings out the aroma of the rich taste of thick, bitter coffee. 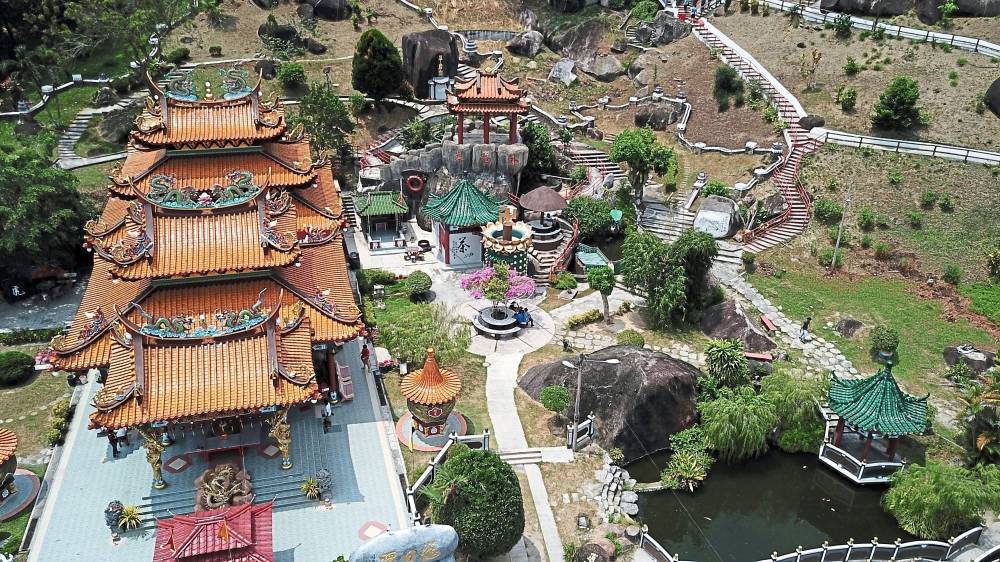 Worth a thousand words: An aerial view of the Taoist temple Fu Lin Kong, which boasts a mini Great Wall garden. The island has an interesting mix of religious architecture to explore.

Make a stop at the Hai Seng Hin Enterprise dried satay fish factory to learn more about how the snacks are made with a short tour along the production line. It’s a little known fact, but the production of satay fish originated in Pangkor during the 1980s.

Until today, however, it is still a main commercial activity on the island, with a wider range of processed seafood such as fish, prawns and squid. With the satay fish, it starts off with dressing and descaling the raw materials, which are then dried and processed into packaged products of different textures and flavours.

Don’t miss the chance to do some shopping, as the various goods on sale are great souvenirs to take home. Right next door is Hoo Huat Boat Builder, one of Pangkor’s few remaining shipbuilding factories, which is another traditional industry on the island.

The island’s fishermen still purchase boats from these boat-builders to ply their trade. A dying tradition, it is passed down from one generation to another, with each boat-builder learning the craft and honing their skills over the years.

It takes around five months to build a boat, which is made based on accumulated experience and the customer’s requirements, with no drafts or plans, meaning that each is unique in its own way. 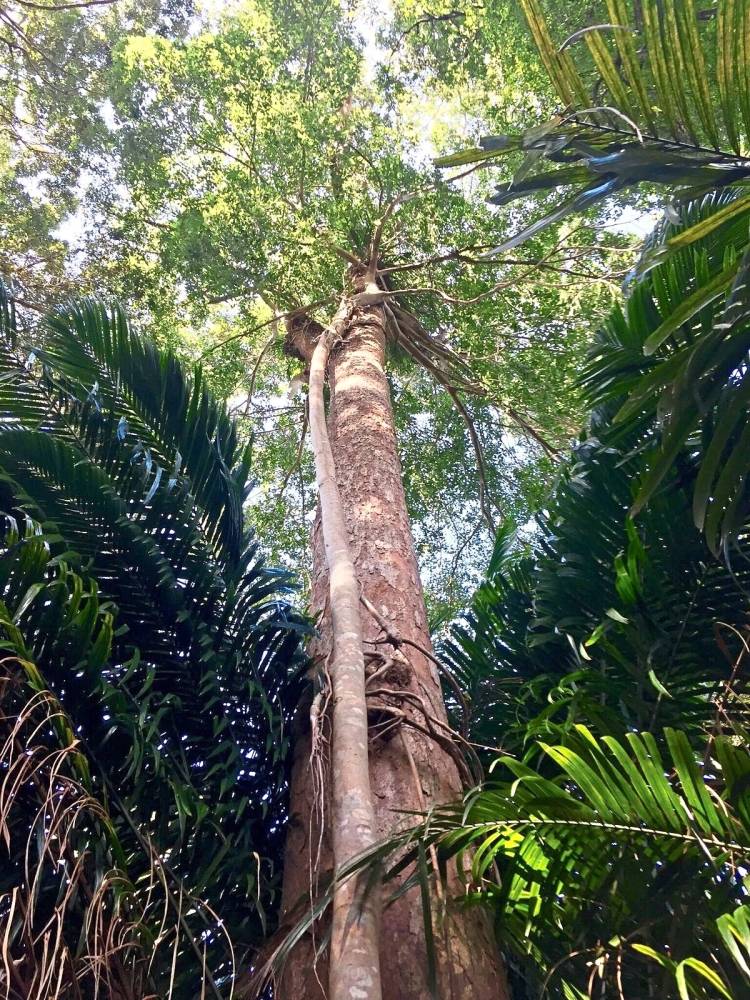 Rare species: The magnificent Shorea lumutensis tree is found in only three places in the world, and mostly in Pangkor.

A Microcosm Of Cultures

Aside from its traditional trade, Pangkor is also home to many different cultures that manifest in the form of religious architecture.

Many may not know that the island boasts its own floating mosque, the Masjid Al-Badr Seribu Selawat, where sunset would be the best time to visit to see the structure both in the light of day and the dark of night.

The colourful Sri Pathira Kaliamman Temple would also be a good place to take a breather, but to experience the colourful Thaipusam procession on the island, do take note that it culminates at the Sri Pathirakaliaman Temple.

Other sightseeing spots include the majestic Lin Je Kong, where you can take a hike up a hill to take in an aerial view of the island, or Fu Lin Kong, where you can enjoy a miniature version of China’s Great Wall of China without leaving the country.

The island is so much more than just its sun-drenched beaches, beautiful as they are. Away from the maddening crowds of the city to experience rare glimpses of nature for its ambience, the island is easily accessible due to its proximity to major urban centres.

There’s no better time to visit than the present. Why not plan a longer trip of leisure to the island to escape the drudgery of running in the rat race, spend quality time to relax, and bond with family or friends?

Pangkor offers a wholesome experience combining nature, food, fun and leisurely relaxation, with lots of outdoor activities for all ages. A day trip is simply not enough – especially now that you can enjoy its duty free benefits and get better value for your money! 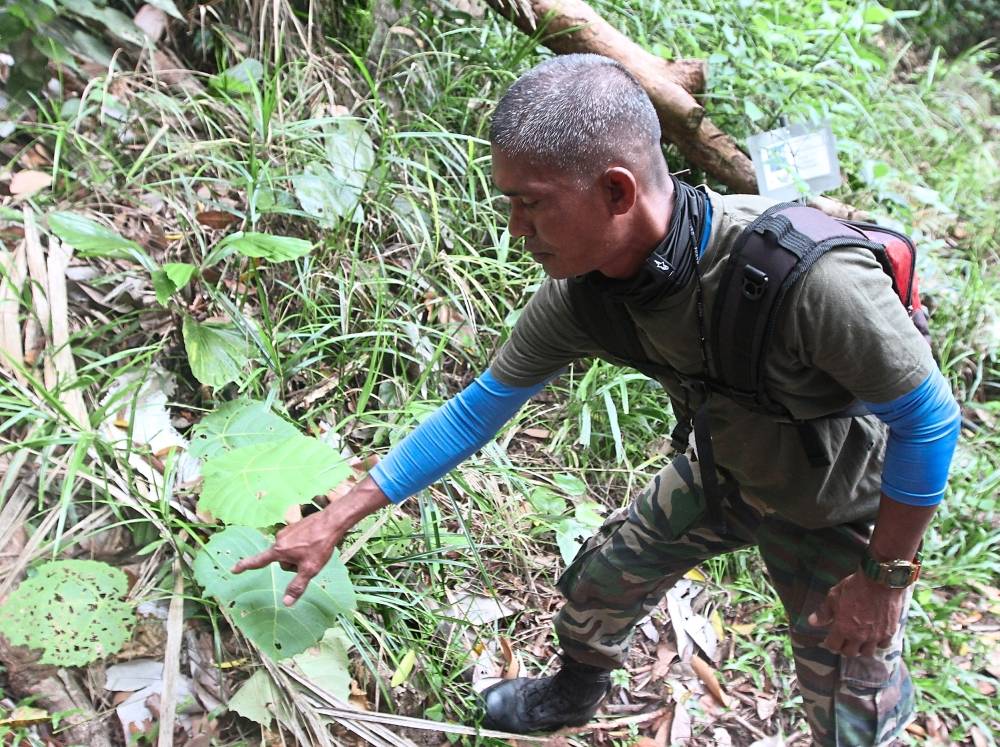 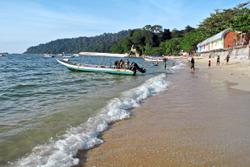