Latiff Sher Mohamed found his niche in providing “how to” solutions to problems confronted by many personnel managers, now referred to as HR managers, in their day-to-day affairs. Photo: 123rf.com

If one was pursuing a career in the field of personnel and industrial relations in the 1980s, one would have most likely attended a training seminar conducted by Latiff Sher Mohamed or obtained one of his books about finding professional solutions to work problems.

Standing at 6ft 2in (188cm), Latiff was an imposing figure. I am not sure if it was his height, personality or vast experience but Latiff was someone to be reckoned with. After successfully completing his Higher School Certificate in Anderson School Ipoh, Latiff pursued a Bachelor’s Degree majoring in Economics in the Universiti Malaya in 1962 and obtained Honours. Subsequently, he acquired a Chartered Secretaries and Administrators UK qualification and an MBA in Personnel Administration.

Jobs in the private sector were hard to come by in the mid 1960s. After a teaching stint, he joined a British plantation company for five years before moving on to the American electronics industry in the 1970s, notably in Texas Instruments Malaysia as personnel director.

After almost a decade with TI, he set up his own company to impart his vast knowledge to the personnel management fraternity, which was in dire straits for professional competence and guidance.

In the early 1980s, Good Year Malaysia, a leading American global tyre manufacturer, hired him as personnel director while enabling him to retain his own company. His humble startup enterprise was to grow by leaps and bounds, with the toil Latiff put into it.

Early in his career, he developed a strong inclination to mastering the labour laws of the land, a subject close to his heart. Soon after expanding his knowledge, he began conducting public Labour Law workshops, providing detailed insights and unique specialist interpretations, thereby boosting participants’ confidence and understanding of those laws. Latiff was also responsible for bringing the Industrial Court Awards, involving dismissals, to the attention of personnel and industrial relations managers. He had meticulously and painstakingly studied all Awards and to make it easy for non-legal minds, had the citations summarised and grouped into their respective subject matter (e.g dismissals, due inquiry, misconduct, and so forth). This was a boon to the manager’s effectiveness in advising top and line management so that dismissal decisions did not backfire or prove costly to the company.

Latiff found his niche in providing “how to” solutions to problems confronted by many personnel managers, now referred to as HR managers, in their day-to-day affairs.

For startup companies, instead of being in the dark, personnel executives could now get their hands on books such as Manual On Personnel Policies & Procedures, Documentation For The Personnel Department, Q&A On Labour Laws In Malaysia, and more.

In 1982, Latiff published his first book, Discipline Without Punishment – An Employer’s Guide. At the time, he probably did not know he would become a prolific writer and a walking encyclopaedia on any topic related to HR management and leadership. In the years ahead, he decided to share his wisdom through writing to impact the world of HR & IR in the country. His passion for the professional development of the HR function became second nature to him. He was a workaholic and a “production machine”.

Latiff stayed relevant with the times with his special knack of coming out with appropriate books in trend with local HR developments. For example, when the government was encouraging the formation of in-house unions or advocating policies in the workplace against sexual harassment or when the buzzwords were Quality Circles, Management Competences or Corporate Culture, Vision and Mission Statements or when the effectiveness of the personnel department was being questioned by CEOs, his books on the hot topics of the day were spot-on and sought-after.

When Information Technology was making inroads in the business world in the mid 80s, Latiff had the breadth of vision to quickly innovate. He hired the services of IT specialists and came out with the first local HRIS (Human Resource Information System) to help automate HR processes and offer a wide range of products to cater for different daily HR operational needs.

He came to the limelight in 1985 with his weekly articles in the Business Times which ran for five years. As he was a practitioner with an exemplary track record, corporate leaders and managers found his articles on human capital, performance management and leadership eye-opening, enriching and practical.

During his employment years, he had nerves of steel to take the bull by the horns and the courage to take action even if it involved making unpopular decisions. There was no way he was going to be the typical run of the mill HR director or someone’s rubber stamp.

He provided true leadership to the organisations he worked in. He was able to reel in people to get results by sheer force of personality and reputation.

He was the brains and an icon in his field. His work could match, if not surpass, those of international standard. I dare say that he was the only HR professional in the country who had documented all his work, leaving a legacy of over 150 reference books.

Although Latiff had loads of ideas to write about, he was not a hearty conversationalist. There was no time for small talk because of his preoccupation with work. It was unnerving for many people to communicate with him but he had a wry sense of humour to break the ice.

He had some personal luxuries that he indulged in – drinking good coffee, and listening to country and western music (in particular Hank Williams Sr and the likes of Johnny Cash). He was a Hollywood movie buff and never failed to watch the annual Academy Award presentations.

At times he found it frustrating that, in spite of his reputation and understanding of local culture and the ability to think globally and act locally, organisations continued to work with foreign consultants and the local a-dime-a-dozen training providers who were no match to his high standards and experience.

He had pride and did not suck up to anyone for any personal advantage and neither did he look for “crutches” from anyone.

Latiff was indeed a self-made man who didn’t compete for personal accolades. He had made a big difference by contributing immensely in the field that he loved dearly.

My beloved brother passed away suddenly on Sept 25 last year at age 77. He is deeply missed. 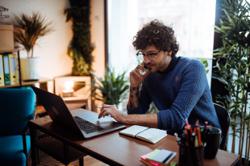 Is the hybrid remote-office model the future of work worldwide?