Heart and Soul: Sher Mohamed, my father, the top cop

In 2007, when Malaysia celebrated its 50th year of independence, my book, Kismet – Life, Contributions & Sacrifices Of Sher Mohamed Allah Baksh was completed. It was launched by Tun Dr Mahathir Mohamad in May 2008. It was a dream come true for me that a statesman such as he would honour my father’s memory.

During the launch, I informed the audience that I was contemplating to one day produce a movie on my beloved father’s life story. To illustrate this point, I presented the dramatic opening sequence of 20th Century Fox, with its captivating fanfare and iconic spotlights, to capture the attention of the audience. The audience waited eagerly in suspense of what was coming next. Alas, there was no trailer clip of a movie in production. Sighs of disappointment echoed. The guests had to be satisfied at this point of time with a slide presentation and video clips of my father’s career, which had been shown on television in the past. There was a lot of hard work to be done still. The author Mohamed Rafique Sher Mohamed and his mother passing a copy of his book, Kismet, to Tun Mahathir, at the book launch on May 15, 2008. File photo: The Star/Art Chen

I was dead set on making this movie based on the true story of my father, even though I was not in the movie business. After all, my father had the sort of career in the police force dating back to the pre-Medeka, British colonial and Japanese occupation eras and post-Independence years. I believe that my father’s story is of the stuff of Hollywood fare. A good movie director could grasp the story and turn it into a great movie.

It had all the elements of an interesting Malaysian story – historical perspective, gripping action, family, romance, friendship, adventure and destiny. I could visualise the story. In my view, it was also time for Malaysians to be inspired by true patriotic stories of local heroes, be they uniformed personnel or civilians, in our history. I reckon treading in uncharted territory is what it takes to make dreams come true. 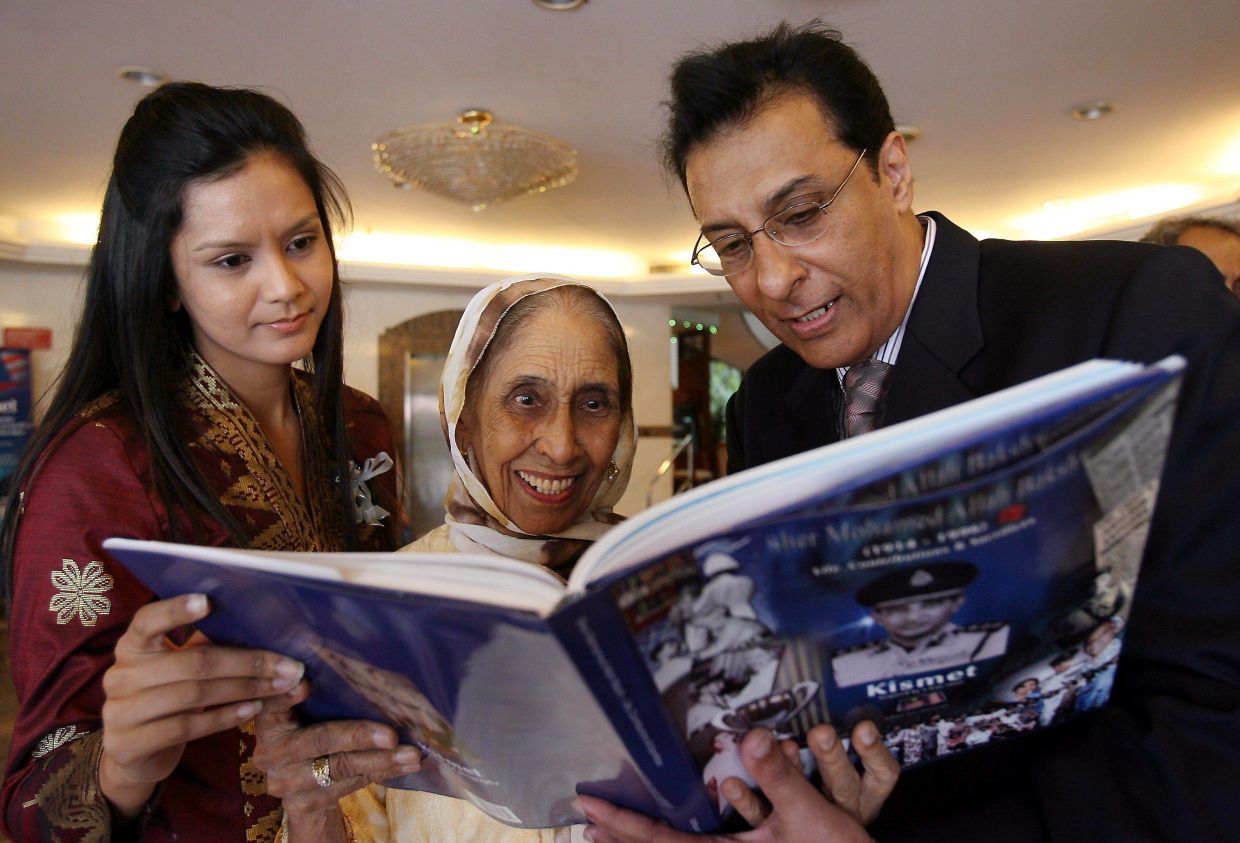 Things were going to be easier from the point of the book’s launch, so I thought, especially after all the publicity and media attention on my father’s career as a police officer. But sadly, I was to discover otherwise.

To proceed with my plans to make this movie, I approached people in the business to help me get started. I was advised to first write a screenplay. Although familiar with the written word, I had no clue what writing a screenplay entailed and was therefore intimidated by the suggestion to produce one.

Since the task proved daunting at this stage, even though I had familiarised myself with the basics of the craft to get up to speed on the fundamentals, I decided that the best approach to get the screenplay completed quickly, was to identify a scriptwriter, with good references, with whom I could work with on this project. This proved difficult and it became everything but the plan I had in mind. So, I embarked on my own.

With the basic knowledge I had acquired, I began writing the story that was in my mind. I was driven to get this blueprint ready for the feature film I was imagining, and before long, the script with its 120 pages was completed.

I contacted almost all the top local movie production houses, but none were forthcoming. I sought the help of intermediaries to put me in contact with producers, but this proved futile. I realised money was needed to make the movie and I made great efforts to contact the rich and famous in the country, including the big media magnates, to help me produce this movie by becoming sponsors. But no one came forward.

Then, President Barack Obama came to Malaysia and I was inspired to write an article on President Lyndon Johnson, who had come to Kuala Lumpur in 1966. At the time, my late father, as Deputy CPO, was responsible for looking after all security affairs during the visit. I later contacted the US Ambassador to seek his assistance on the making of this movie by putting me in touch with movie producers in Hollywood or any potential American sponsors to realise my dream to give Malaysians, particularly, and the global audience, a special kind of movie on our country.

Several staff members of the US Embassy responded by giving me encouragement and provided all kinds of leads to support my project. The Counsellor for Commercial Affairs invited me for a meeting and advised me to attend the American Film Festival in Santa Monica in 2014. I was also advised to find a sponsor for the trip, otherwise I would have to find my own way there.

This was a tough and expensive call to make since there were no guarantees. There was not much time and I had to act fast. There were other pressing matters at home, and there was also this anxiety about flying long haul. But if I didn’t go and give it my best shot, I would never know if I could succeed. So, together with my wife for moral support, we made the trip to America.

On the eve of the film festival, I fell in the bathroom of the hotel I was staying at, and was taken to a nearby hospital where my injuries were diagnosed as a bad contusion (upon returning home, I was diagnosed with four broken ribs). Bearing the pain, I limped daily to the festival at the Loews Hotel with the screenplay in my hand, and pitched my project to many producers, directors and distributors.

A few expressed interest in co-producing and one, who admired my passion and determination, even challenged me to find a Malaysian producer who was present at the festival to meet him to discuss plans for a joint venture.

Following a series of false dawns, it was apparent that some funding from my side was critical if the project was to take off with the American producers. I became confident that Finas back home would support me. As I and my wife took in the sunset on the pier in Santa Monica, someone spoke to us in Bahasa Malaysia. He was Kamil Othman, the director-general of Finas, though I didn’t know it then. We were happy to meet another Malaysian.

Upon returning to Malaysia, I went to Finas to brief the Production Management Division about my trip to the US and sought help in obtaining funding for my project. I was informed that there was a major shakeup at Finas and a new boss was appointed. I discovered the person at the helm was none other than Datuk Kamil Othman. My hopes soared.

Were doors finally opening for me? What a coincidence! Surely, he would help me.

For a year, I sought to meet him, but he was simply too preoccupied with his new portfolio. He, however, asked me to work with the Special Measures Unit, which suggested I set up my own production company before proceeding with any funding application.

When this was done and a license for my film production company had been obtained, I completed all required documentation for funding and submitted my application to the newly set up Content Malaysia Pitching Centre.

I was called to pitch my idea but two days before my turn came up, my beloved mother passed away. With a broken heart and with my youngest son Fazrul by my side, I gave the panel members the best pitch I could muster on my project. I even presented a “trailer” of sorts I had done to get the look and feel of the movie.

I shared my Santa Monica experience with them and referred to the two supporting letters in my application from the US producers/ distributors. Within two weeks, I was informed that my application for development funding was turned down.

After this dampening episode, I picked myself up again and attempted to get support from various bodies but these other attempts also came to naught.

We celebrated our 60 years of independence recently, as a proud and multiracial nation.

How I wish I could have promoted this movie during the celebrations but my dream to make a movie of Hollywood proportions for our beloved country, is still not realised. Maybe someday soon.