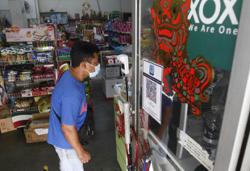 If you’re feeling under the weather, it’s best to just stay home and do some light stretches. Photo: AFP

Everyone falls sick once in a while.

And that messes up your workout regimen, especially if you’re progressing well towards achieving your fitness goals or are preparing yourself for a marathon.

Should we fight the ailment and continue exercising?

In general, moderate exercise can help boost your body’s natural defences against illness and infection, but intense exercises can actually lower your body’s immunity.

There is a difference between working out and doing physical movements.

A structured workout routine – one where you’re breathing heavily, sweating, working hard and feeling some discomfort – awakens a stress response in the body.

When you’re healthy, your body can easily adapt to that stress.

Over time, this progressive adaptation is precisely what makes you fitter and stronger.

However, when you’re sick, the stress of a tough workout can be more than your immune system can handle.

If the workout leaves you completely drained, chances are your symptoms are going to worsen, leaving you feeling more ill afterwards.

So, when you’re feeling under the weather, perhaps walk outdoors instead of run, or do some light stretches.

MC Hammer (remember him?) was rumoured to never allow his dancers to take a break from rehearsals, even if they were sick, because he reckoned exercise would enable them to fight off the infection faster.

There is some truth to this as exercising (with only a cold) can help relieve nasal congestion.

While on tour in the 1980s and 90s, Hammer and his entourage would dance for six hours a day, seven days a week.

But they had a masseuse who travelled with them to help deal with the daily aches and pains.

Just last year, he said he had not gotten a cold of flu for the past 20 years, and attributed his good health to God, working out and eating right.

Hammer starts his morning with a shake that includes protein powder, fresh and frozen green vegetables, a multivitamin for men, 2mg of fish oils and four capsules of glucosamine to keep his joints supple.

In a 2008 study on exercise habits and influenza published in the journal Plos One, results showed that people who never exercised got sick often, while people who exercised between once a month and three times a week did the best.

Those who exercised more than four times a week actually got sick most often.

Hence, being sedentary or overexercising can lower immunity, while exercising in moderation can improve immunity.

According to Mayo Clinic, it is okay to exercise if all your symptoms are “above the neck”, e.g. a runny nose, nasal congestion, sneezing or a minor sore throat.

Consider reducing the length and intensity of your workout though.

If your symptoms are “below the neck”, such as chest congestion, a hacking cough, an upset stomach, fever, fatigue or muscle ache, it’s best to just rest.

It’s pointless to push yourself when you’re feeling miserable and lethargic.

Let your body be the guide and allow it to dictate what’s best.

If you’re healthy, train hard. If not, scale back.

Despite putting Covid-19 measures in place, the gym isn’t exactly the most hygienic place in the world, so a cold bug could easily be spread by handling equipment that isn’t disinfected properly or through respiratory droplets in the air.

Hence, during this pandemic, whether you have a case of the sniffles or a body ache, just stay home.

Working out with super sets, giant sets and drop sets