Try some gentle stretching before your workout to help decrease the popping and snapping sounds. — Filepic

Almost every joint of mine clicks and pops painlessly.

Whether I’m walking on tippy toes or running, my toe and ankle joints will make sounds as if they have in-built anklets.

The clickety-clicks may not be melodious to the trained ear but my family can sense my presence when they hear these clicks.

My brother’s joints produce similar music and I kid you not, but he has a rhythm of his own. However, his sounds are limited to his lower extremity (between the knees and ankles) while mine involves more “instruments” i.e. various body parts.

Surely you must have experienced a click, crack or pop at some point when you move your limbs?

Growing up, cracking knuckles was a favourite past-time among my schoolmates. We’d have a mini competition to see how many finger joints we could crack.

Pulling the finger and hearing a pop sound didn’t count – you had to forcefully flex (bend) the joint and hear a loud sound to be crowned champion. It was a silly children’s game during recess (before the advent of gadgets) and I was never crowned cracking queen.

Yes, there were other girls who diligently practised at home and could make three sounds from one finger – that was a feat!

Over time, the cracking felt good and it became a (bad) habit whenever I was bored. Every time, my father would reprimand me as it annoyed him.

I stopped only because my grandmother said I was going to get knobbly, arthritic fingers in my old age and that no man would want to hold my hands.

Oh, the naivety of the young!

Although there is no scientific evidence to prove my grandmother right, some studies show that repetitive knuckle cracking can do some damage to the soft tissue of the joint. It may also lead to a weak grip and a swollen hand.

Now, when I try to crack my knuckles, it is painful and I cringe when I hear children doing this.

Do note that cracking (unnatural) and clicking (natural) is not the same thing. When you hear a pop or snap in your joint and experience pain and swelling, then you require medical attention. — 123rf.com

There are many theories as to why our joints make noises, but the exact cause is simply unknown.

As a rule, painless cracking of joints is not harmful. If it makes you feel good, why not.

However, common sense would generally suggest that the intentional and repetitive cracking of one's joints is not only potentially bothersome socially but could also be physically troublesome when it produces pain and swelling.

The cracking sound is actually coming from the compression of nitrogen bubbles that naturally occur in the spaces of the joints.

Scientists explain that the synovial fluid present in your joints acts as a lubricant. The fluid contains the gases oxygen, nitrogen and carbon dioxide.

When you pop or crack a joint, you stretch the joint capsule. Gas is rapidly released, which forms bubbles.

In order to crack the same knuckle again, you have to wait until the gases return to the synovial fluid.

Every dancer can attest to this: It is a relief to be able to pop your hip joints during warm-ups because the area feels “unblocked” and your legs can kick so much higher.

For us, a joint that doesn’t pop is painful because there is a locked sensation inside.

My pops and snaps can also be heard when I do shoulder presses. Every time I lift my hands above the head, there is a snap at the shoulder.

A client of mine emits grinding sounds from her knees when we do lunges and squats. She says it also happens whenever she sits and stands.

Apparently, our joints start making more noises as part of the ageing process due to the wearing away of cartilage.

Back then, my brother and I assumed our noises were from over-exercising and didn’t give it too much thought because it didn’t bother us.

It wasn’t until I was older and my body had taken a beating from the decades of athletic training and dancing that I began to hear more of these clicks, snaps and pops.

Medical experts say these sounds are nothing to worry about as long as there is no pain.

The sound could also indicate that a muscle is tight, and is rubbing and causing friction around the bone; or, it could stem from the tendons rubbing over the bone as they go about their gliding paths.

One way to avoid creaking joints is to get up and move as much as you can during the day.

“We say motion is lotion – the more you move, the more your body lubricates itself, ” says orthopaedic surgeon Dr Kim L.Stearns. “When you’ve been sitting or lying around, fluid in the joints doesn’t move. The more active you are, the more your joints lubricate themselves.”

You can try gentle stretching such as rotations of the ankles/wrists/neck/shoulders/hips to lubricate and limber the joints before embarking on your workout.

It’s only when you hear a pop or snap in your joint and experience pain and swelling, that you require medical attention.

The pain could be an indication of underlying abnormalities of the structures of the joint, such as loose cartilage or injured ligaments.

An unusual bulge in the groin could be a hernia 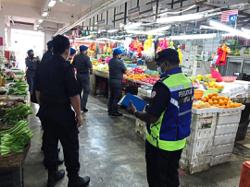 Scientists create new substance that helps trap airborne viruses on surfaces
Covid-19 vaccines effective against the Delta variant
Novavax Covid-19 vaccine over 90% effective
Tips to safely reuse your N95 face mask
Swollen lymph nodes after Covid-19 vaccination could be mistaken for breast cancer
Is 10,000 daily steps really the magic number for better health?
Enlarging your breasts through surgery: What you need to know
When too much work ends up killing you Premium
Eating disorders can affect anyone, regardless of gender or size
Have you started procrastinating more during this pandemic?