Aisya (centre) with two other junior bakers in a scene from the series. Photos: Screenshots

Twelve-year-old Aisya Syahrul from Manchester, United Kingdom is one of the finalists in Britain’s Junior Bake Off (JBO) showdown, which will take place today (Jan 28). She made it into the finals with her Malaysian-inspired dishes.

The eldest of three siblings, Aisya learnt how to cook and bake from her mother and grandmother.

According to her baking profile, her earliest baking memories are of learning how to make curry puffs from her mother. She enjoys using Malaysian ingredients and flavours in her baking and learns from her grandmother who video calls her from Malaysia regularly.

JBO, which is a spin off from Britain’s Channel 4 series The Great British Bake Off, featured 16 participants from the ages of nine to 15, who took part in two groups.

The selected participants from each group competed at the JBO big tent in the English countryside for the finals week which started on Monday (Jan 24).

The participants competed in a series of Technical Bakes and Showstopper Challenges with their own original recipes.

One of the three finalists will be crowned Junior Bake Off Champion today (Jan 28) and the winner will take home a glass cake stand trophy as the best junior chef.

Aisya’s culinary skills and use of Malaysian-inspired recipes impressed judges British baker and TV presenter Liam Charles and British pastry chef and author Ravneet Gill. The judges were particularly impressed with her pastries.

The schoolgirl whose ambition is to become a doctor like her father, created peanut butter tarts, which the judges said had “light and crumbly pastry that melts in the mouth”. She bagged first place in the Pop Tart Technical Challenge. Aisya wants to be a doctor like her father when she grows up but she joined the competition to improve her baking abilities.

Then, in the Family Crest Pie Showstopper where participants had two hours to create a personalised family crest pie, Aisya used Malaysian curry powder in the chicken, potato and peas filling, and topped her pie with the Jalur Gemilang and Union Jack.

The judges were extremely impressed with the pastry even though they found the decoration “a bit messy” and Liam was quoted as saying the chicken curry filling “brought them to Malaysia”.

In the Biscuit Challenge where participants had to make an “About Me” biscuit box, Aisya decorated it with hibiscus flowers.

She also came out as the Star Baker in the Dessert Imposter Challenge when she made a chocolate cake and topped it with realistic-looking “chicken satay with sliced cucumber, onions and sauce on a banana leaf”.

Aisya revealed that the satay is made of cookie dough and eaten with the sauce which is made of caramel and peanuts.

The judges said her cake “looks classic and gorgeous” and was “very clever”.

In an interview released by Channel 4, Aisya said she took part in JBO to showcase her baking talent and have it judged by Charles and Gill.

“I wanted my bakes to be tasted from a professional point of view so that I could get feedback and become a better baker,” she said.

Children experience stress too. How do we help them cope?

Helping others benefits us too

A right to belong in Malaysia

Championing the rights of children in Malaysia 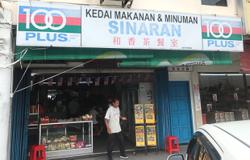