The South Korean actress, who tied the knot in December last year, is due to give birth in June. Photo: Lee Ha-nee/Instagram

On Dec 21, 2021, actress Lee Ha-nee shared that she got married to her non-celeb boyfriend in Seoul, Korea.

Not a month later, the 38-year-old is sharing yet another good news – she is pregnant with her first child.

Her agency Saram Entertainment confirmed on Sunday (Jan 16) of the actress’ condition and that she’s at a stage where she needs “rest and stability”.

One Korean news portal stated that “Lee is currently four months into her pregnancy and is due to give birth around June” while another reported the agency saying, "we are wary of providing precise details. We respectfully ask for your understanding.”

It’s said that Lee met her husband through an acquaintance early last year (2021). In November 2021, she confirmed the relationship.

The winner of the 2006 Miss Korea beauty pageant – who also goes by the name Lee Honey – made her acting debut in 2009 in the drama The Partner.

EXCLUSIVE: Actor Kim Moo-yul says he hated his despicable character in Korean movie 'On The Line' 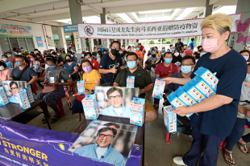