‘It’s no mystery how I ended up on this show – after all, I’m one of the original Fly Girls.’

Let's be clear about HBO’s new suspense-dramedy The Flight Attendant: its protagonist is a hard-partying, fast-living individual who blithely walks right into trouble.

And when we say “hard-partying”, we mean reckless boozing, lost weekends, memory gaps, one guy’s bed being as good as any other, you know the routine.

Also, as it becomes obvious to the viewer by the fourth episode, flight attendant Cassie Bowden (The Big Bang Theory’s Kaley Cuoco) did not exactly have the greatest father figure growing up.

And there’s a good reason why we see a lot of awkwardness when she tries to do a simple thing like set up a meet with her visiting brother Davey (T.R. Knight of Grey’s Anatomy).

So, a lot of what happens in the course of The Flight Attendant is the product of decisions made by an individual with a history of, without sounding too judgmental, dodgy decisionmaking.

If you expect sensible actions from someone with Cassie’s history, well, let’s just say you’re barking up the wrong logic tree.

And once we’re clear about that, we might find it easier to settle into the groove of this quirky, often bonkers adaptation of a 2018 bestseller by Chris Bohjalian. 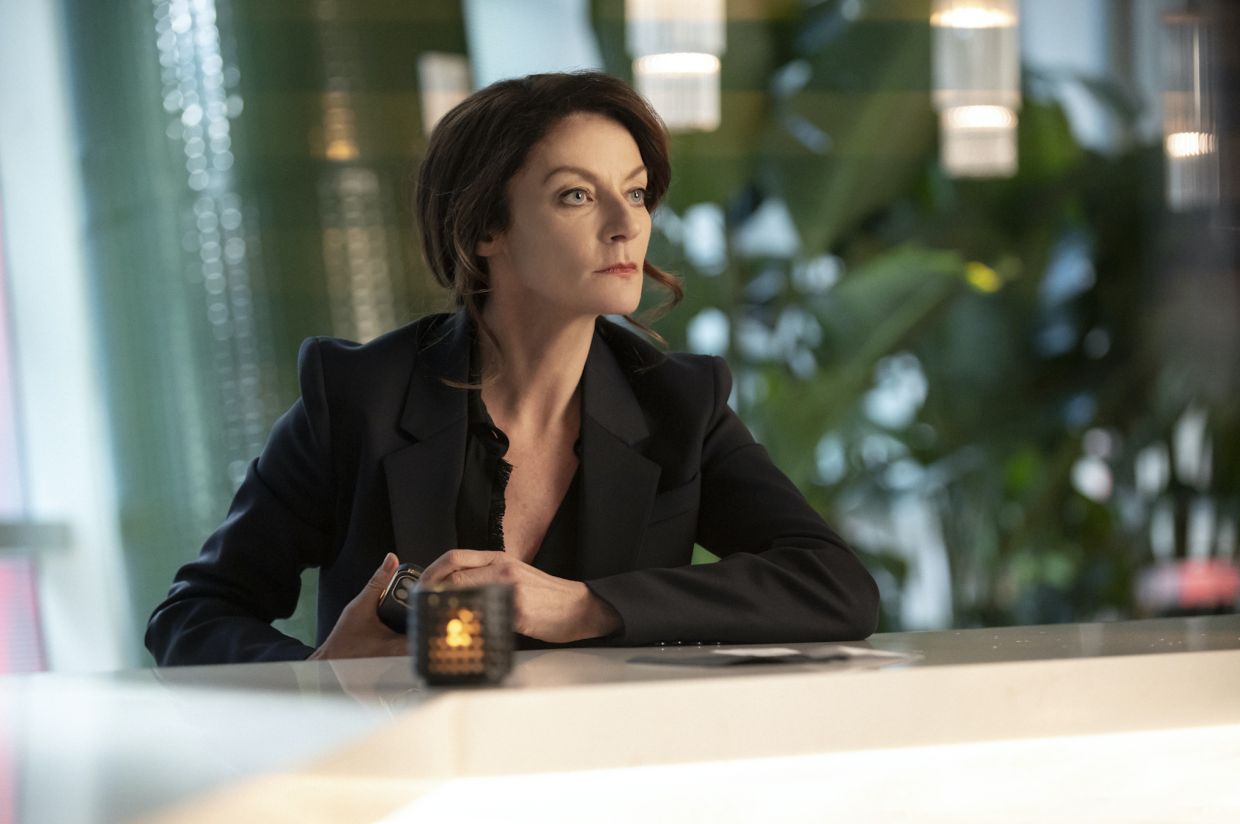 ‘I really need to stop landing in roles where service to a dark, evil master gets in the way of my self-allegiance.’

It’s not a spoiler but the founding premise of this eight-episode show that Cassie hooks up with mysterious, charming businessman Alex Sokolov (Michiel Huisman) on a flight to Bangkok and wakes up next to his corpse the next morning.

From there, it’s a madcap journey for Cassie and those close to her (not a very big group) as she tries to fill in those memory gaps and find out what Alex was involved in that got him killed (and put a nasty fixer named Miranda, played by The Chilling Adventures Of Sabrina’s Michelle Gomez, on her trail).

We have some moments of contrived convenience – her best friend Annie (Zosia Mamet) happens to be a top criminal defence lawyer, and Annie’s not-boyfriend Max (Deniz Akdeniz) happens to be a skilled hacker. Such handy tools, I mean, characters, eh?

Cassie’s airline colleagues are initially irked that they are drawn into an FBI investigation simply for being the crew on Alex’s flight, but it turns out that one – Rosie Perez’s midlife-crisis-grappling Megan Briscoe – has some intrigue going on in her own life that could be tied in somehow.

Lest we forget, Cassie is also prone to having conversations in her head with Alex, or rather her idealised version of a still-living Alex.

The scatterbrained decisions that Cassie makes while trying to put things right with her conscience and her life are what mostly contribute to the suspense.

Each episode, we’ll see Cassie snoop about and sneak into places where she has no business being, putting her life in danger and complicating the lives of those in her circle.

The Flight Attendant cleverly leads us to come to care for these poor folks as they dig themselves into deep holes to help Cassie – who is often oblivious to just how bad things are getting for them.

But then, it’s not as though things are all that easy for her, either.

A strong scene between Cassie and her brother sheds a lot of light on their childhood, and the choices she has made to remember the past how she wants to recall it – while the reality is still an open and raw wound for Davey.

Its great supporting cast aside, The Flight Attendant will command your attention on the sheer strength of Cuoco’s terrific central performance.

As we learn after a couple of episodes, this is not just a murder-mystery but also a pretty searing bout of self-examination for Cassie, and Cuoco is quite deft at blurring the boundaries between her character’s actions and reflections, softening the edges of what should be a thoroughly unlikeable individual.

Plus, the show’s pacing is tight, it makes neat use of split-screens to heighten the suspense as paths converge or parallel events occur, and its wild turns will pretty much grab you right from the spaced-out opening credits (over Blake Neely’s snappy title track).

The question before the viewer is, whether to give in to that nagging inner voice telling you to forget this claptrap put on The Queen’s Gambit instead; or let yourself be swept along by a bravura performance on a bonkers ride.

As for myself, I’m strapped in all the way to the finale.

All eight episodes of The Flight Attendant are available on HBO GO and Astro On Demand.

‘Scream’ review: Smug, bloody and fairly entertaining
K-pop group Wanna One’s album release might face hitch, according to reports
BamBam of K-pop group GOT7 drops second solo EP
Vivian Hsu to sing song about 'mask of kindness' at concert; is it aimed at Wang Leehom's wife?
Adele postpones Las Vegas shows because half her crew is down with Covid-19
Ex-‘Dance Mom’ Abby Lee Miller sues hotel chain for millions after door falls on her
Grammy-winning singer Meat Loaf dies at 74
Heidi Klum’s legs are insured for RM8mil, but one is worth more than the other
Bradley Cooper was naked for six hours to shoot ‘Nightmare Alley’ full-frontal scene
Horror classic 'Scream' is back, and promises a bloody good time Premium