‘No, for the last time, I AM NOT Leonardo DiCaprio underneath this get-up!’

A doctor, a rebel, and a cannibal walk into a prison – and no, that’s not a Father joke from Raised By Wolves but part of the premise of La Revolution.

Forget anything resembling an actual history lesson, of course – they have documentaries for that.

This is a gore-drenched, bizarre, always watchable, occasionally infuriating dark fantasy that only borrows its setting and some characters from the facts.

Its opening narration is quick to dismiss history as being whatever the victors want us to know.

The series also wears its heart plainly on its sleeve when it comes to portraying the class struggles of the day, making no apologies for that or for any perceived dumbing down of the complex sociopolitical issues that led to the actual French Revolution.

(I can only hope that the forthcoming Netflix production of Conan will embrace its own proclivities with such gusto and stand its ground in this snowflake-pandering era.)

So, back to La Revolution: it gets off to an intriguing start, as a badass figure rides down and decapitates a somewhat aristocratic-looking type, who. Bleeds. Blue. Blood.

Hah, yes, if ever the term “blue bloods” were meant to be taken literally, this show is where that happens. 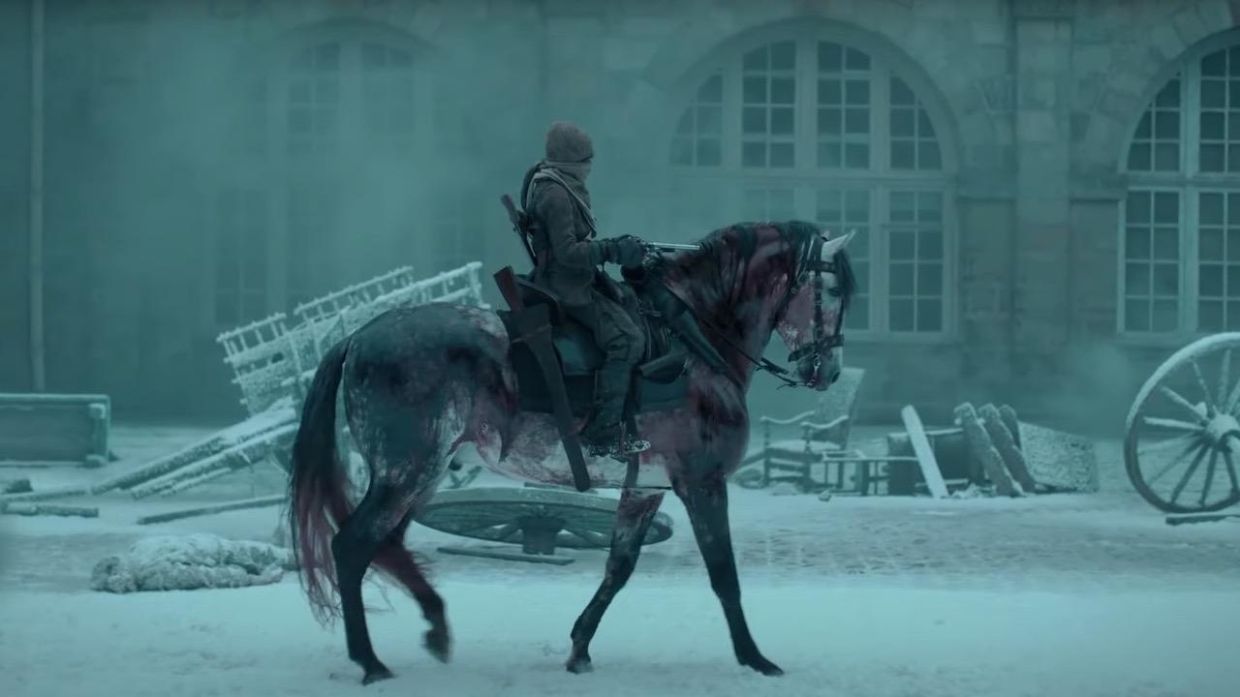 This portion of the show is brought to you by the letters D, for desolate, and W, for Witcher.

A mysterious disease is afflicting the people of 18th-century France, but mostly the nobles. It causes their blood to turn blue, and gives them certain enhanced abilities in exchange for removing others (like a heartbeat).

In the county of Montargis, prison doctor Joseph Guillotin (Amir el Kacem) hears of a young woman slain in a cannibal attack, and is soon brought in to examine the accused killer, a foreigner named Oka (Doudou Masta).

Guillotin realises that Oka is innocent, and high-ranking people are covering up the case to protect the true killer.

Wait, did you say Guillotin? Yes, no less a historical figure than the inventor of the infamous guillotine is one of the show’s main characters. He is portrayed quite differently from his real-life counterpart but I’m guessing his arc is, erm, heading in the same direction.

In whirlwind fashion, the series introduces us to other principal characters, including: noblewoman Elise de Montargis (Marilou Assilloux), who is strong-willed and dreams of upsetting the status quo; her harsh but ineffectual uncle Charles (Laurent Lucas); his weak, crippled and scorned son Donatien (Julien Frison); prison nurse Katell (Isabel Aime Gonzalez-Sola), who seems to know a lot about what’s going on; Elise’s mute sister Madeleine (Amelia Lacquemant), who seems to have special gifts even without the blue-blood affliction; and sinister police chief Edmond de Perouse (Dmitri Storoge), who serves the nobles unquestioningly and with ruthless efficiency (and an almost fanatical devotion).

More colourful and sometimes less than savoury characters show up in the course of the first season’s eight episodes, but I would rather steer clear of the spoiler territory that some of them inhabit.

Suffice to say that this French production is engagingly crafted and gorgeously filmed, with rather spot-on framing and lighting to fit the tone and mood of every scene.

This can sometimes be off-putting, especially when the camera chooses to dwell on horrifically mutilated bodies – and if just one of those makes you look away, you might as well watch the final two episodes with your eyes closed. Since he left his fiddle at home, Donatien decided to just strike Insta-worthy poses while his town burned.

The magnetic ensemble cast, plenty of intrigue, and action mixed with horror, all add up to make the eight-episode debut season an easy one-day binge. Just right, too, for a Halloween marathon.

I have to say, though, it’s not always plain sailing. There are some pacing issues while the rebels and nobles alike draw their battle lines in the later episodes, and the finale is quite the hot mess.

Without giving too much away, I was rather annoyed to find that a huge part of the rebels’ game plan involves a barricade that looks even less formidable than the props used in a lower-budgeted staging of Les Miserables.

The facepalm moments aside, the finale does have some shocking developments and leaves us with loads of new questions burning a hole in our collective brainpan while awaiting the (hoped-for) second season.

Oh, but these little gripes may not amount to much when you consider the way in which some of La Revolution’s themes may resonate strongly with viewers.

For one, there is the easily spread and voracious nature of the disease (enough said about that and its effects on well, everything).

For another, it is the way a particular stratum of society seems so engrossed in its little games and manoeuvring as to totally disregard the welfare of the other strata; indeed, to actually play games with those people’s lives and use them for sport.

Thirdly, with the (multiple expletives deleted) water cuts we’ve been going through particularly in the Klang Valley, it’s not hard to identify with the Great Unwashed here. To borrow a phrase from Monty Python And The Holy Grail, we can tell the (mostly) bad folks from the (generally) good ones because the former “haven’t got sh*t all over ‘em”.

All its strong points, intended or otherwise, make La Revolution the gut-punching series we didn’t know we wanted – but now realise we needed.

One can just imagine a clueless figure in authority, when told of the people languishing in the doldrums during these times of restricted movement, saying: “Let them binge-watch TV.”

Well, binge we shall, then.

All eight episodes of La Revolution are available on Netflix.

Enjoy it with rat stew, rat soup, rat pies, or the ever-popular ratatouille.