‘If I win my first case, the next thing I’m going to do is sue for ribeye every Thursday.’

Who doesn’t love a good underdog story, except maybe the top dogs in the tale?

And Aaron Wallace (Nicholas Pinnock), the central character of the gripping if sometimes manipulative legal/prison drama For Life, is as far from any sort of victory lap as the furthest “under” of the pack.

The series, which is just into its second season, is inspired by the life of Isaac Wright Jr, a US music producer who was wrongly convicted of being a drug kingpin in New Jersey and sentenced to life imprisonment.

While in prison, he became a paralegal and successfully fought to overturn the convictions of 20 other inmates before securing his own freedom.

That, in a nutshell, is what For Life – on which Wright Jr also serves as an executive producer – is all about.

Since it is only “inspired by” Wright Jr’s experience, it is not necessarily a given that Wallace succeeds in his endeavours.

Let’s just say that there are triumphs, some big and some small, together with more setbacks than mortals should have to bear; and they uniformly succeed in eliciting great amounts of sympathy and emotion from the viewer. ‘And in closing, Your Honour, the decision should go my way because I look sharp and my opponent didn’t even bother to adjust his tie.’

Also, know this: the 13-episode first season provides some of the most whiplash-inducing ups, downs and swerves of any binge-worthy serial in years.

Part of this is thanks to series star Pinnock (Criminal: UK Season One), who delivers a layered, measured and captivating performance throughout to give us a complicated but always watchable protagonist.

Wallace is smart, ambitious, proud and stubborn, traits that work both for him and against him, and his principles often land him in the soup with the authorities, his fellow inmates, and even his friends and family.

(He doesn’t even spare his benefactor, Timothy Busfield’s former US Senator and recovering alcoholic Henry Roswell, a tongue-lashing when the latter’s lack of focus hampers an important case.)

Then there’s the plotting, which is sharply executed and makes good use even of the obligatory melodramatic (and very foamingly soap opera-ish) elements of the series.

Yes, Wallace’s wife Marie (Joy Bryant) has stopped believing her husband will ever get out and is now in a relationship with his best friend Darius (Brandon J. Dirden).

The Wallaces’ teenage daughter Jasmine (Tyla Harris) still dreams of her father walking free one day, but has a bombshell of her own to drop. 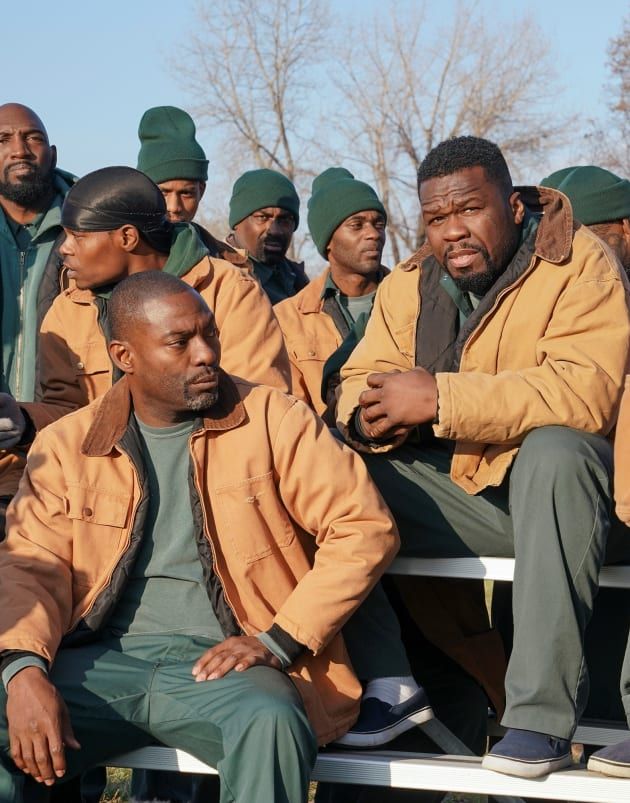 ‘I don’t trust that lawyer convict. Word is, he used to be a cop back in the UK.’

Then there are the ones who railroaded Wallace into his life sentence: District Attorney Glen Maskins (Boris McGiver, Person of Interest, House Of Cards), who is now running for Attorney General of New York; and his crony, assistant DA Dez O’Reilly (Erik Jensen).

They are so single-minded in their earnestness to enforce the law that it makes them almost two-dimensional, and it would all be a little hard to take if not for McGiver’s brilliantly hateful turn in the role of a lead meanie who has convinced himself that his cynical manipulation of the law is for the greater good.

Fortunately for Wallace, the prison where he is incarcerated is under the supervision of a reform-minded warden, Safiya Masry (Indira Varma, Rome), who happens to be married to Maskins’ rival for the AG’s post. Oops, plenty of potential complications there.

When it’s not showing us the hard struggles of wrongly convicted men (that is, after all, the essence of the series’ being and one of its core messages, about the ease with which lives can be destroyed for expediency in criminal investigations – and worse, it’s usually “nothing personal”), For Life also shows how power and privilege conspire to get rid of flies in the ointment like Wallace and Masry.

The result of one such conspiracy is the arrival of hardened criminal Cassius Dawkins (Curtis “50 Cent” Jackson, another executive producer on the show), whom Maskins and his collaborators get transferred to the medium-security prison where Wallace is held just to trouble our hero and Masry.

Jackson does a (face-) smashing job as the nasty Dawkins, quickly establishing an aura of menace around the convict through his imposing bulk, almost perpetually disappointed (with humanity) expression, and precisely-worded veiled threats/warnings – all without ever raising his voice.

The deftness with which For Life juggles the machinations of its two poster boys for villainy in the first season’s second half is what makes it hard to stop watching. (Can’t imagine how agonising it was for those who caught the show on a weekly basis when it first aired.)

Speaking of agonising, Season One closed on such a note – leaving our hero, his family, Masry, sympathetic inmates like Wallace’s cellmate Jamal Bishop (Dorian Missick) and viewers in a desperate limbo.

The Season Two opener wastes no time in unloading its cargo of daring manoeuvres – moves that shake things up considerably for nearly everyone.

We’re only two episodes into the series’ sophomore session as this is being written, and I can’t help but feel that a massive spanner is being hefted somewhere, just waiting to be thrown into the works.

Or, just maybe, viewers will get the chance to learn if an underdog has just as much appeal when he’s on top of the heap.

Season One of For Life is available on Astro On Demand. New episodes of Season Two air every Thursday at 9.55pm on Fox HD (Astro Ch 704/unifi TV Ch 453).

Still waiting for the other shoe to drop.