‘You know we picked the wrong planet to colonise when even aloe vera doesn’t grow right in this soil.’

With just the first hour of Raised By Wolves, a stunning, allegorical and disturbing rumination on faith and the human condition seen largely through non-human eyes, Ridley Scott atones for the sheer dissatisfaction evoked by Prometheus and Alien: Covenant.

My main peeve with both those films had to do with the plot being advanced (towards hollow ends) simply by the sheer stupidity of individual characters who should have known better.

Curiously, Raised By Wolves depends largely on the overall stupidity of humankind for its story to progress, but this did not bother me at all.

Maybe I just expect more of individuals separated from the herd than the cow collective itself; but I digress.

Let’s get back to this series and its incredible premiere episode, which had me running the gamut from fascination to sadness to gape-jawed astonishment.

On the strength of its first episode alone, Raised By Wolves immediately hooked me for the rest of the ride; yet it also raised its own bar to such a high level that subsequent episodes struggled to match it.

With Scott on board as an executive producer and director of the first two episodes, Raised By Wolves certainly bears his visual stamp.

It also has a strong resemblance to another key element in his body of work: namely, artificial beings (that also bleed milky fluids here) struggling to evaluate their existence and purpose. 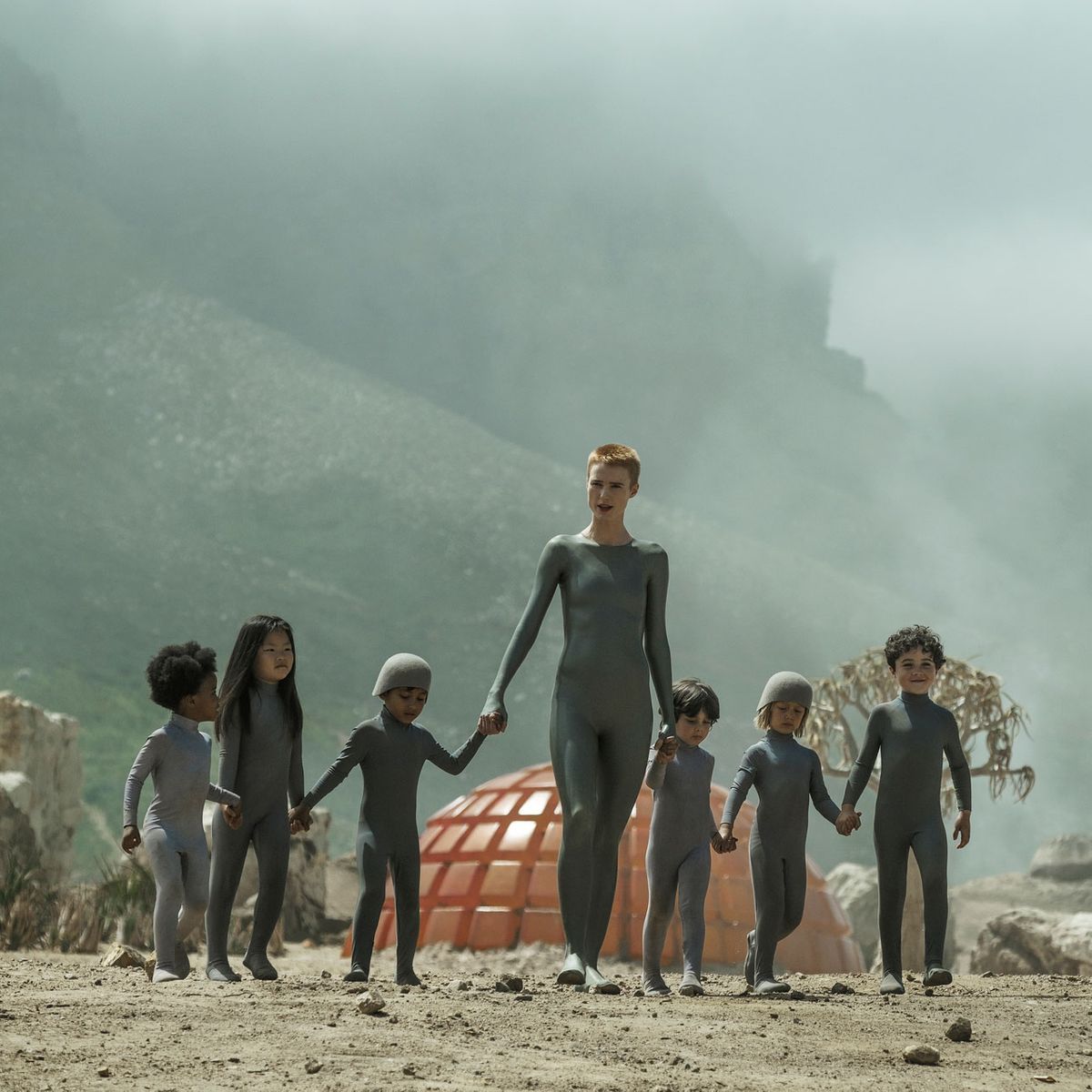 Every day on Kepler-22b was just another walk in the park for Mother and her brood. Not really, we’re just sugarcoating it so you won’t be too traumatised by what actually happens.

The main man behind the series is, however, creator/writer Aaron Guzikowski (who wrote the screenplays for Denis Villeneuve’s Prisoners and the recent Papillon remake).

It is the 22nd century, and war has destroyed Earth. Two androids, generically named Mother (Amanda Collin) and Father (Abubakar Salim), are sent into space with frozen, viable human embryos to colonise the distant world of Kepler-22b.

The other side in the war, meanwhile, has placed its chosen few (OK, a thousand or so) in a massive space ark bound for the same world.

Certainly, tensions are bound to arise when the two sides meet; but this was where the show’s first episode took a sudden, horrifically gory turn that made me rewind it just to make sure I hadn’t missed something crucial.

True enough, Guzikowski was holding a sizeable info dump back for the next episode, and all through it, he demonstrates enough respect for his audience to refrain from doling out exposition on a platter – leaving us to figure things out, and also without trying to steer us towards coming down on a particular side of the conflict.

While the series explores the parallel nature of faith and conviction, it also lets us experience its arguments through the fresh-eyed perception of Mother, Father, and the children they raise – specifically, their “child” Campion (Winta McGrath) and others whom they, let’s say, acquire.

Father, so wonderfully played by Salim, is clearly performing a role for which he has been programmed, yet he is sentient enough to alleviate the monotony on the colony world with his version of Dad jokes – and also to express doubt and frustration when he “feels” unappreciated.

Mother is the series’ central figure – she literally has mothering instincts hard-wired into her – and her journey goes beyond the physical trials of Kepler-22b, soon taking on a metaphysical aspect. ‘From the look of things, I figure we’re a little late for the colony-warming barbeque.’

Through it all, Collin radiates both earnestness (as she battles the odds to fulfil her nurturing role) and menace (after the first episode, you will realise that a smile from her is hardly a reassuring sign) with her courageous and committed performance, drawing our gaze to her like a beacon whenever she is on screen.

Father and Mother are not exactly Adam and Eve, and Kepler-22b is no Eden, but there is plenty of innocence that gets lost along the way.

While the serpents in the series are just massive bone skeletons left in the soil, a more metaphorical tempter arrives with the ark: not only its occupants – chiefly represented by warriors Marcus (Travis Fimmell) and Sue (Niamh Algar) and their son Paul (Felix Jamieson) – but also by what it represents (zealotry) and brings (technology that gives Mother access to, let’s say, hidden aspects of herself).

This is where Raised By Wolves struggles a little, bogged down by a soggy post-middle portion where the characters just seem to be stranded in a kind of limbo while Mother and Marcus advance their respective arcs.

Even then, Guzikowski entices us to stay with the tantalising seeds of a new mystery, one arising from the planet itself.

There is hardly a limit to the storytelling possibilities here, and the first season of Raised By Wolves does a wonderful job of exploiting the potential of its themes and setting.

A second season has already been greenlit, an encouraging sign in times when good serial science fiction is scarce.

Harsh without being cynical, capable of tenderness in the most surprising instances, this one is a frank look at humanity, artificial life, and which of the two has the greater penchant for inhumanity.

All 10 episodes of Raised By Wolves are available on Astro On Demand and HBO Go.