‘Why did we enter an ambulance in a death race? Duhh, pretty obvious, innit?’

From dusk to dawn, people barricade themselves in reinforced homes that seem to have come right out of the Purge movies.

Illegal street racers in heavily modified vehicles participate in a no-quarter-given Death Race-type competition with freedom from an oppressive regime held out as the prize.

Oh, and if you think some of these vehicles look like live-action reimaginings of famous cartoon automobiles, you are not alone.

And let’s not forget the garishly purple opening credits and 1980s-style synthesiser-heavy theme music. Or the whiffs of John Carpenter’s Escape From New York and Neil Marshall’s Doomsday.

All this sounds like someone put a bunch of favourite genre elements into a blender and poured the resulting roughie (it’s not all that smooth) into Curfew, the new eight-episode British dystopian thriller.

As you can imagine from the description, it is set in a grim dark near future, with assorted bits of backstory flashing past now and then to help you figure out how things got so grim and dark (so pay attention). ‘I carry this gun around as a deterrent in case any smart-aleck feels like shouting “Hey, Mr Bean!” when I’m out and about, y’dig?’

Basically, a viral plague has ravaged the planet, turning the infected into hungry horrors known none too affectionately as “mooks”. Anyone bitten soon turns into one, too; and if the mooks don’t get you, the stormtroopers will.

The street race – organised by reclusive billionaire Max Larssen (Adam Brody) – promises deliverance from this bleak existence, with the winning team getting whisked off to an idyllic virus-free island.

And so it is that the key figures – and there are many packed in here – find themselves in the latest edition of this race, for assorted reasons.

Some of these character arcs tie in to the greater scope of Curfew, hinting at sinister and far-reaching conspiracies – which present an added threat to everyone on the road.

The General (Sean Bean), a mean old hothead in a sporty rig with his due-any-day pregnant girlfriend Faith (Rose Williams), who has a rather tragic and twisted backstory;

The Donahues (whose patriarch is played by Hustle’s Adrian Lester), an average family in an armoured station wagon;

Joker Jones (Billy Zane), the martini-sipping driver of Team Awesome’s simply awesome camper van (which reminds me of the Scooby Gang’s Mystery Machine after it’s been driven through a river of controlled substances). 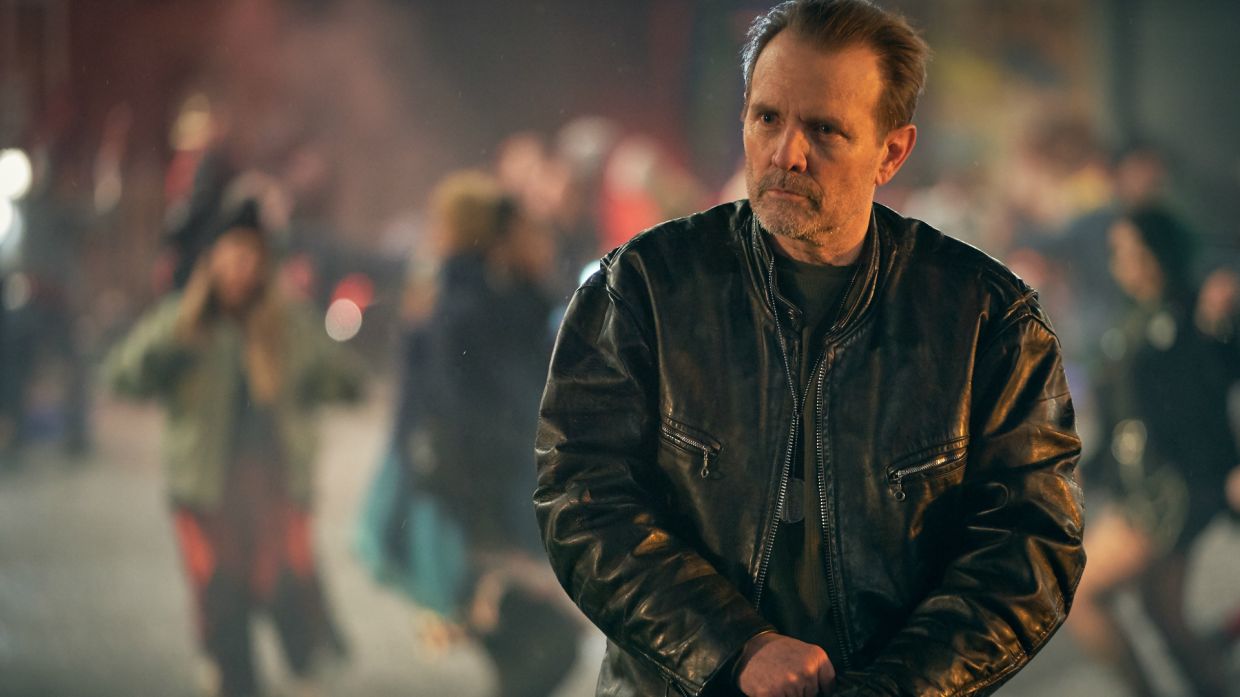 ‘Ride shotgun with me if you want to live. But only if your name’s Sarah.’

Pay attention and you will spot Michael Biehn as the ominously nicknamed Roadkill Jim, and acclaimed veteran Miranda Richardson behind the wheel of the armoured truck with Queens of Stone emblazoned on the side.

The vehicles, like the racers, are an eclectic lot. Some sport kooky exaggerations that would make them right at home on the beloved old Wacky Races cartoon, while others hold fast to a Mad Max/Death Race-style cocktail of offensive and defensive modifications.

All these precautions, though, do not add up to much when you have bloodthirsty folks at the wheel. And I mean the ones driving the show.

Series creator Matthew Read (a Peaky Blinders alumnus) certainly seems to have a hankering for spilling crimson, judging from the number of prominent characters who bite the dust in the first three episodes.

The best approach is to not get attached to anyone on the show. Surely you’ve had enough practice from all those seasons of Game Of Thrones and The Walking Dead?

As mentioned earlier, Curfew contains many familiar genre staples, and while it might appear derivative on paper, Read and his crew have imbued the show with a wicked humour and manic energy all its own.

Where it doesn’t fare so well is in the way it frequently falls back on cliches like: the infected relative kept locked away in a room; or the angsty teen whose brattiness leads to family tragedy (and which no one in the clan seems to bring up again); or the noob firing a missile launcher backwards (it already seemed corny when Rae Dawn Chong did it in Commando back in 1985); or the selfish racer shooting out other vehicles’ tyres after being helped by their occupants.

But the methodical world-building is intriguing, and the action (as well as the tone of each episode) unpredictable enough, to make it worth our while keeping track of this wacky death race.

And away they go on the way-out Wacky (Death) Races!

Actor Chris Hemsworth talks about going butt-naked in new ‘Thor' movie
Blink-182’s Travis Barker rushed to hospital with wife Kourtney Kardashian by his side
'Ms Marvel' star Iman Vellani is living her superhero dream
Actor Yoo Ji-tae on playing 'The Professor' in the Korean remake of ‘Money Heist’
HK's Four Heavenly Kings not reuniting on stage at anniversary gala after all
Sandra Bullock taking an acting hiatus because she’s ‘so burnt out’
Save the oceans, 'Aquaman' star Jason Momoa urges
Ben Affleck's 10-year-old son reverses Lamborghini into BMW during test drive
Malaysian Tamil cinema eyes OTT platform for greater reach
From The Archives: 15 years ago, we saw a Transformer on the big screen for the first time