Taiwanese singer Annie Yi has come under fire for her insensitive comments on the late Hong Kong singer Anita Mui.

Yi appeared on a talk show last weekend to speak about her career and family life. During the interview, Yi admitted that she used to devalue her self worth in search of love. However, the heartfelt interview quickly turned sour as the singer began comparing her younger self to Mui, whom she said “was obsessed with love until the very end of her life”.

“If you don’t find your self worth first, it will be very tragic as you will end up like Anita Mui,” she told the host. “Anita looked for love her entire life. Even when she was at her thinnest (before she passed away), she wore a wedding dress on stage.”

Yi was referring to Mui’s concert in November 2003, where the late singer wore a wedding dress in one of her final performances. Mui, who succumbed to cervical cancer in December the same year, had never been married. The Cantopop diva chose a wedding dress for her stage outfit because she had always wanted to try one on.

Needless to say, Yi’s remarks struck a nerve with netizens who questioned the need to involve Mui in the conversation.

“Anita never ‘spent her life looking for love’. Do you really think nobody would have wanted such a successful woman? What a joke (coming from) a cheater like you,” wrote one netizen, alluding to a cheating scandal surrounding Yi from 2009.

Yi is currently a contestant on the reality show Sisters Who Make Waves. It remains to be seen if her position in the competition will be jeopardised by her latest misstep. 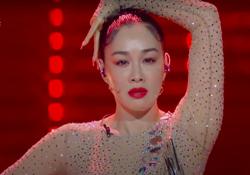